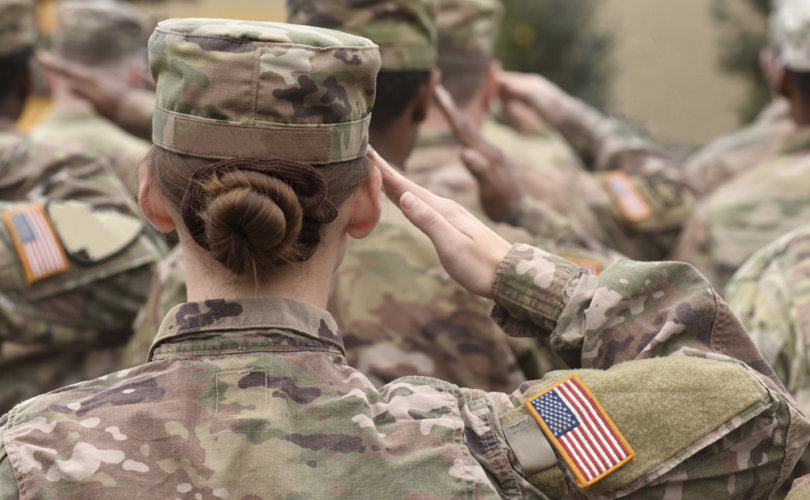 WASHINGTON, D.C. (LifeSiteNews) – Language to make female Americans eligible for the military draft has reportedly been scrapped from the annual National Defense Authorization Act (NDAA), representing a rare victory for Congressional conservatives and a measure of pushback against the Biden administration’s efforts to further infuse the U.S. Armed Forces with gender politics.

“Leaders of the House and Senate Armed Services committees left the provision out of the final version of” the bill, “according to two people with knowledge of the negotiations,” Politico reported. The development has been called “stunning” in light of the idea’s prior support in the House and Senate, both of which are controlled by Democrats.

Some speculate it was sacrificed in order to secure Republican support for other provisions deemed a higher priority, such as changes to how the military prosecutes crimes within the ranks.

“It appears the NDAA will no longer require women to register for the military draft,” said Republican U.S. Sen. Josh Hawley of Missouri. “I certainly hope that is the case. If it is not, then I will keep fighting for a vote on the Senate floor to strip this wrong and misguided provision out of the final bill.”

Calling the female draft an attempt at “imposing a woke ideology on our troops rather than meeting the current needs of our military,” Republican U.S. Rep. Vicky Hartzler of Missouri said, “Women are not chess pieces in a political game. They are doctors, lawyers, engineers and already valuable members of our all-volunteer force. I applaud the removal of this unnecessary provision and am grateful to see reasonable minds come together to join me in resisting this effort.”

Last year, the National Commission on Military, National & Public Service recommended that women ages 18 to 26 be required to register for the Selective Service pool alongside men as part of a broader effort “to modernize, enhance and improve America’s system to draw on the talents, skills and abilities of all Americans if a national emergency requires lawmakers to do so.”

This past March, President Joe Biden drew fire for declaring there was “much, much more work to be done to ensure that women’s leadership is recognized and we have more diverse leaders; we reach the top echelons of command for all who are qualified, including all women,” including “designing body armor that fits women properly; tailoring combat uniforms for women; [and] creating maternity flight suits,” as well as an “intensity of purpose and mission to really change the culture and habits that cause women to leave the military.”

Critics oppose extending the draft to women for both practical reasons of military effectiveness and out of cultural concerns, namely the further erosion of differences between the sexes. In 2016, Marine Corps veteran Jude Eden, who served in Iraq, explained the position in a viral for the Daily Signal:

“The draft is for the sole purpose of replacing combat troops; it’s for replacing infantry,” she explained. “It’s not for playing in the band, it’s not for being a cook, it’s not for riding a desk to free a man to fight, as the saying went back in World War II. It’s to replace men when they’re dying by the thousands in the front who are attacking the enemy. Women don’t have an equal opportunity to survive in those circumstances.”

“We are being fed a bill of goods that this is about equal rights, and if women have equal rights then they should be drafted too. All of this is garbage,” Eden continued. “Equal rights do not mean that we must do the same things. It doesn’t mean that we can perform the same roles, especially when those roles require intense physical demand. No matter how prevalent feminism becomes, it will not make women’s bones as dense as men’s. It will not give us boundless supplies of testosterone coursing through our veins.”

“I mean, we can juice all our females and send them all to CrossFit, but they’re still not gonna be, against men who want to kill them, that’s not an equal opportunity to survive. They’ll target those women first. Women are higher-value targets not only as POWs but as video fodder, for video propaganda to demoralize the country, demoralize the units, demoralize the war effort.”

Making women register for Selective Service would only be the first step of drafting women. Next, Congress would have to reinstate the draft itself, which was abolished in 1973.