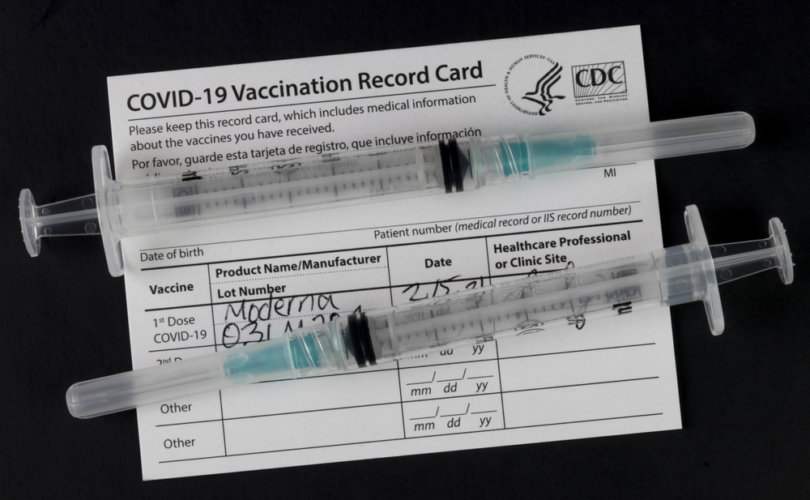 A recent tweet by conservative celebrity Candace Owens spotlighted how Stanley Black & Decker, a Fortune 500 company and one of the largest tool manufacturers in the world, has developed an internal tracking system to monitor its employees’ COVID vaccination status.

“As we previously communicated on December 22, to prepare for the enforcement of the [OSHA] ETS,” read a company memo to its workers, “all U.S. employees are required to use the Vaccination Status Tracker by Friday, Jan. 7, 2022, to upload a copy of their COVID vaccination record, indicate that they are in the process of being vaccinated, or indicate that they do not intend to get vaccinated.

The tracker is a safe, secure, and easy-to-use digital tool available to all U.S. employees.”

The communication refers to OSHA’s Emergency Temporary Standard (ETS) provision, which the Biden administration claims grants the agency the authority to enact sweeping vaccination mandates. More than a third of Congress has formally rejected this notion in a “friend of the court” brief to the U.S. Supreme Court, which is scheduled to hear arguments on January 7 about the OSHA mandate.

LifeSiteNews confirmed the authenticity of Stanley Black and Decker’s order with Debora Raymond, a company vice president of public relations. “Part of being compliant with the [OSHA] directive is collecting the vaccination status of our employees,” she wrote. “We have many resources available for our employees, including access to and guidance from our company’s Chief Medical Officer, Dr. Mitch McClure.”

LifeSiteNews inquired whether Dr. McClure was concerned at all about the mounting evidence that the COVID inoculations are harmful and their long-term side effects unknown, but had yet to hear back from Raymond at the time of publication.

Rather than championing employee’s constitutional rights, the Stanley Black and Decker memo shows that the company invested in enforcement of the OSHA mandate even before it received the force of law, demonstrated by the corporation’s willingness to spend its resources to create a unique COVID vaccination tracking system.

Lowe’s, one of Stanley, Black and Decker’s largest tool retailers, further exemplifies how some large corporations have adopted an ask-no-questions culture of compliance toward the government’s COVID dictates: “What we’re going to do at Lowe’s,” said CEO Marvin Ellison in Dec. 9 interview, “is we’re going to be compliant to any government requirement. If the mandate comes from OSHA for us as a retailer, we’re going to spend zero time debating whether or not the government has the right to do it.”

“We’re just going to execute it because that’s the role we have to play,” he continued. “Thus far, we don’t have any concerns relative to this impeding our staff or limiting our ability to run our business or serve our customers.”

“Because that’s the role we have to play” is a continuous sentiment expressed by many businesses moving in lockstep with OSHA’s directive. The company’s communication with workers implies that it has no liability or choice in the matter while threatening staff with the prospect of unemployment.

“We recognize these are challenging times and appreciate your cooperation with this new federal requirement,” wrote grocery giant Inserra Supermarkets in a communique to its employees that was posted to Twitter. “Stay safe and healthy.”

Owens’ tweet also suggested that a U.S. government database to track citizens’ COVID vaccination status is imminent, as businesses creating their own COVID tracking systems inches the populace closer to that standard. Indeed, the Immunization Infrastructure Modernization Act of 2021, a bill designed to create a federal vaccine database, has passed in the U.S. House of Representatives with Republican support and currently sits in committee in the Senate. It remains to be seen whether the bill will move out of committee for a vote.