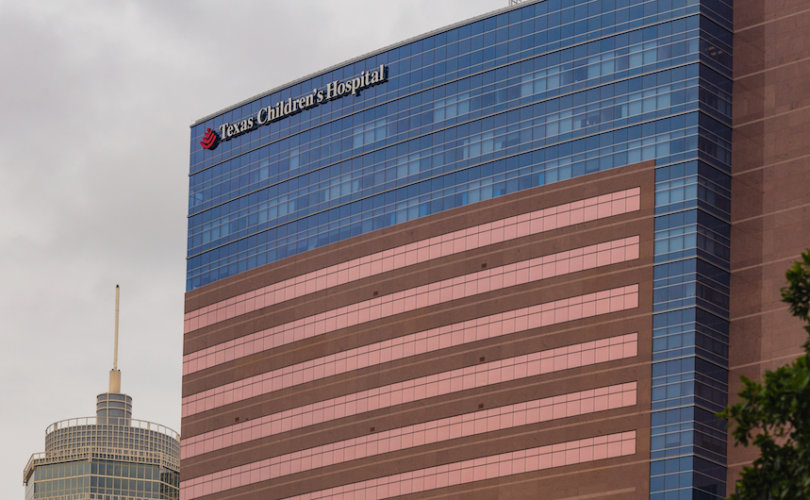 HOUSTON (LifeSiteNews) – The largest pediatric hospital in the U.S. announced that it has stopped providing experimental transgender procedures to children due to actions by Texas Gov. Greg Abbott and Attorney General Ken Paxton.

Paxton had declared in a legal opinion the day before that transgender procedures violate Texas statutes against child abuse.

In response, the Houston-based Texas Children’s Hospital said Friday that it will no longer offer the procedures, citing possible legal repercussions.

“After assessing the Attorney General’s and Governor’s actions, Texas Children’s Hospital paused hormone-related prescription therapies for gender-affirming services,” the hospital said in a statement. “This step was taken to safeguard our healthcare professionals and impacted families from potential criminal legal ramifications.”

The move came after UT Southwestern Medical Center shut down the state’s top “gender clinic” for children late last year amid weeks of protests by local parents and pressure from Republican officials.

The program, known as GENECIS, administered irreversibly damaging hormone-blocking drugs to children as young as 10 years old and made referrals for “sex change” surgeries. GENECIS claimed to have “impacted thousands of youth across the country” before closing in November.

There have been no clinical trials on the use of puberty blockers, cross-sex hormones, or other “gender transition” procedures in minors with gender dysphoria, a mental illness caused by a so-called “gender identity” at odds with one’s sex. The Food and Drug Administration (FDA) has never approved medical treatments for the condition.

— Article continues below Petition —
PETITION: Support Texas Dad risking everything to save his son from being "transitioned" into a girl
Show Petition Text
9799 have signed the petition.
Let's get to 10000!
Thank you for signing this petition!
Add your signature:
Show Petition Text

Transgender hormone drugs are also linked to serious and potentially fatal side effects, including heart attacks, increased risk of stroke and cancer, sterilization, and psychological issues. “Sex change” surgeries, which have been performed on children in the U.S. as young as 13, cause lifelong mutilation. Studies show that as few as two percent of boys and 10 percent of girls with gender dysphoria experience the condition after puberty, according to the American Psychiatric Association’s Diagnostic and Statistical Manual of Mental Disorders.

DFPS started investigating parents who are subjecting their kids to transgender procedures within hours of Abbott’s directive two weeks ago. The Biden administration has moved to halt the inquiries.

The same day Abbott issued his order, Sweden formally recommended against hormone drugs for children with gender dysphoria, due to side-effect risks and “uncertain science.”