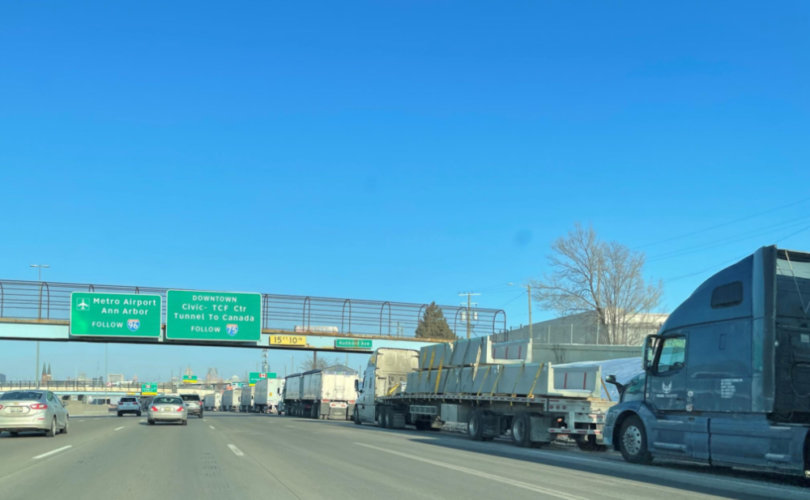 WINDSOR, Ontario (LifeSiteNews) — As the Freedom Convoy continues to rage on in protest of COVID restrictions in Ottawa, American and Canadian truckers have now converged to block access to the Michigan-Ontario border.

American and Canadian truckers have made a convoy blocking access to the border crossing from Michigan into Windsor, Ontario on both sides in solidarity with the growing freedom movement currently protesting COVID measures in Ottawa and elsewhere in Canada. According to the government of Canada’s official website, as of Tuesday afternoon, the crossing, known as the Ambassador Bridge, is “temporarily closed” and the Windsor police are advising people to take alternate routes.

“Congestion continues along Huron Church Rd. Limited traffic is being allowed into U.S. through the Ambassador Bridge. Officers are on scene maintaining traffic points, public safety and enforcement. Please avoid the area and use alternate route. Thanks for your patience,” the Windsor Police stated on social media at noon Tuesday.

“REMINDER: Commercial vehicles are being redirected to the Blue Water Bridge in Sarnia. Local international travel can use the Detroit-Windsor Tunnel (Except for commercial vehicles),” the police added.

Video footage from Global News reporter Sean O’Shea shows one lane open on the Canadian side of the border, with kilometers of transport trucks lining the other lanes to form a motionless blockade.

“Reporting from Windsor, Ontario. This is the backup on the Canadian side trying to cross the Ambassador Bridge into Detroit. The truckers’ protest has everything at a standstill,” O’Shea wrote on Twitter, accompanying the footage.

On the American side, footage taken by an independent reporter can be seen from Monday night showing dozens of trucks lining the off ramp to the bridge that connects Michigan to America, also forming a complete standstill.

On Monday, protester Nick Friesen told the Canadian Broadcasting Corporation (CBC) that he was there to voice his opposition to the continued COVID regime restrictions that have impeded Canadians from living a normal life over the past two years.

“People who want the vaccine, go get the vaccine,” Friesen stated. “I don’t want the vaccine. I’m just out here. We want our lives back. It stops you from doing stuff. I’ve got a family. I’m going to enjoy life. This mask on my face, that’s not how I want my kids to remember me.”

Sam Kovak, another protester, told the CBC that he was out protesting “for my kids, just to get it back to normal.”

“They haven’t played hockey. It’s been a disaster. Just end, give us back what we need to live again. [Prime Minister Justin] Trudeau, [Ontario Premier] Doug Ford, just listen to us,” the father pleaded.

While other provinces such as Saskatchewan and Alberta have laid out their plans to axe so-called COVID measures since the Freedom Convoy protests started more than a week ago in Ottawa, Trudeau’s federal government and the most populous province of Ontario have yet to budge.

According to a 2006 statistical analysis, the Ambassador Bridge is the busiest U.S.-Canada border crossing, and it is responsible for facilitating more than 25% of all merchandise trade between the United States and Canada.

With the border closed, America and Canada are set to lose millions of dollars a day at the vital crossing.

Despite the heavy-handed approach by governments to impose vaccine mandates and other so-called health policies, coronavirus vaccine trials have never produced evidence that the shots stop infection or transmission. They do not even claim to reduce hospitalization, but the measurement of success is in preventing severe symptoms of COVID-19 disease.

Moreover, a growing body of data has found that vaccine mandates and passports have been a  strategy for tackling COVID.