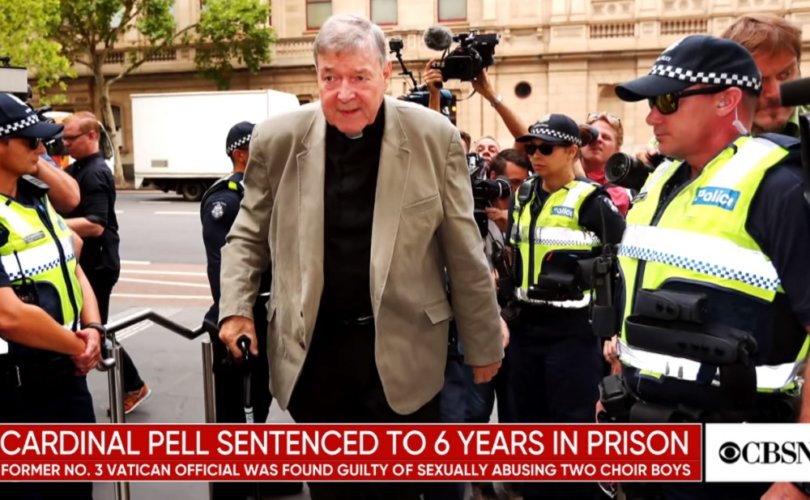 MELBOURNE, Australia, September 17, 2019 (LifeSiteNews) ― A cardinal convicted on charges of sexual assault of a minor has asked Australia’s supreme court to hear his appeal.

Lawyers for Cardinal George Pell, 78, submitted the leave to appeal today in Melbourne. The High Court, which is in Australia’s capital city of Canberra, is expected to grant the cardinal a hearing because of the high profile of his case.

This will be Pell’s final attempt to quash his convictions and be released from jail.

On December 11, 2018, Pell was found guilty of two counts of child sex assault by a jury after only four days of deliberation. A second planned trial was dropped in February 2019 due to a lack of evidence and because one of Pell’s principal accusers had died. In March 2019, Justice Peter Kidd sentenced Pell to six years in prison, with no chance of parole for three years, eight months.

Pell has always maintained that he is innocent of all accusations of child sexual abuse, and after his conviction his legal team applied for a hearing with the Court of Appeal in Melbourne. This took place in early June, and it was reported that the Pell’s defense team had made a positive impression on the three judges. However, on August 20, the Court of Appeal upheld the conviction. It was a split decision, however, as Justice Mark Weinberg said he could not in good conscience refrain from dissenting.

Pell’s convictions for child sex assault have divided Australian opinion and brought both the police and the judiciary of the state of Victoria under international scrutiny. The cardinal’s supporters are shocked that the Victoria police had canvassed for complaints against Pell in what has been termed a “Get Pell” campaign.

The cardinal’s supporters are also astonished that Pell was convicted solely on the evidence of one complainant, especially as several other witnesses all testified that the scenario described by Pell’s accuser ― that the then-new Archbishop of Melbourne had abused two boys in a cathedral sacristy immediately after Mass ― was impossible. An Australian journalist has noted that the complainant’s story was suspiciously similar to claims that led to the wrongful conviction of an American priest, published in Rolling Stone magazine.

When Pell was arrested on multiple charges of sexual assault, half of which were soon dropped, he was the Holy See’s Prefect of the Secretariat for the Economy and thus the third highest ranking figure in the Catholic Church. One of Pell’s colleagues, the Vatican Bank’s ousted Auditor General Libero Milone, has suggested that the cardinal’s arrest was connected to his work tackling corruption in the Vatican’s finances.