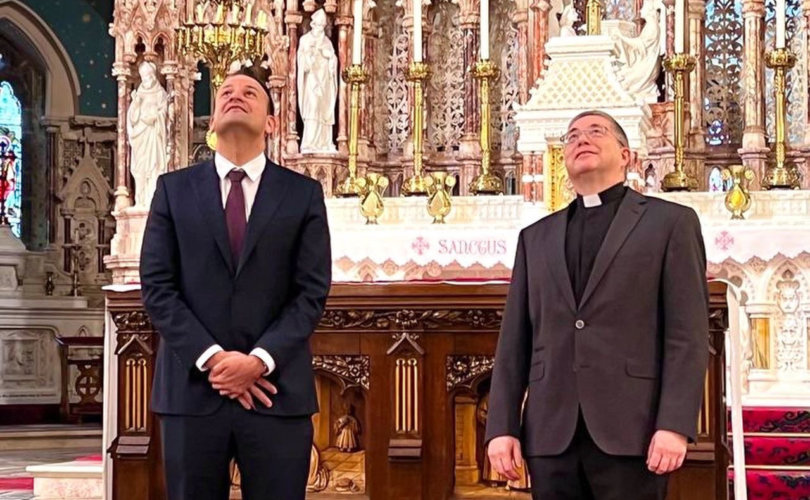 MAYNOOTH, Ireland (LifeSiteNews) — Ireland’s pro-abortion and actively homosexual former prime minister, who will take over his old job again this year, has been given a special tour of the country’s pontifical university and last-remaining Catholic seminary.

Leo Varadkar, who as prime minister in 2018 campaigned for and passed abortion legislation that has killed over 13,000 unborn babies to date, was publicly welcomed and introduced to aspiring clerics at the National Seminary in Maynooth, Co. Kildare, last week by Fr. Michael Mullaney, president of St. Patrick’s Pontifical University.

Mullaney, who did not respond to LifeSite’s questions about whether the politician’s stance on abortion or homosexual “marriage” was challenged during the visit, previously honored Irish president Michael D. Higgins at a 2018 Christmas concert in the seminary on the night before the head of state signed Varadkar’s cruel abortion bill into law.

The pontifical university reported on Thursday that Mullaney was “delighted to get the opportunity to meet with Mr Varadkar and give him a flavour of the rich educational heritage of St. Patrick’s …”

Tánaiste @LeoVaradkar TD, pictured with Rev Prof Michael Mullaney, President of St Patrick’s College, Maynooth. Rev Mullaney hosted the Tánaiste on a tour of the historic St Patrick’s campus which has been educating people from Ireland and overseas since 1795. pic.twitter.com/MXTBcEQes7

Commenting on the visit, Brian Flanagan of the Catholic Association told LifeSiteNews there was nothing “Christ-like” in the spectacle of Catholic priests “fêting politicians who are responsible for killing unborn babies, because the true presence of Christ is always associated with repentance.”

“Pope Francis has counselled ‘parrhesia,’ which means the courage to speak truth to power, but neither the rector nor the president of Maynooth seem to have done so,” Flanagan said.

“They fêted a politician last week who has facilitated almost 7,000 abortions per year, promoted homosexual ‘marriage,’ and appointed a participant in witchcraft (Kathryn Zappone) as Minister for Children,” he continued. “We respectfully request from these priests either a volte face or their resignation.”

St. Patrick’s announced last October that only four men had joined the country’s last diocesan seminary in 2021, in what is believed to be the lowest number since its foundation in 1795.

With only 26 men now in seminary for the entire island’s 6.9 million inhabitants, and the Archdiocese of Dublin presently lacking any future priests, the decline of Catholicism in Ireland appears to be hastening.

No less than eight diocesan seminaries have closed in Ireland since 1993 due to the steady erosion of the Catholic faith and vocations across the island.

St. Patrick’s National Seminary and Pontifical University had been plagued by scandals for years, with former president Micheál Ledwith laicized by Pope Benedict XVI in 2005 after accusations were made that he had sexually abused one boy and another seminarian in the 1980s.

The 2016 dismissal of a whistleblower seminarian who reported homosexual activity, along with several other instances of sexual deviancy by trainee priests, prompted the Archdiocese of Dublin to then abandon Maynooth and send their few seminarians to the Irish College in Rome, which itself ceased being a seminary in June 2020.

A ban on kneeling during the Consecration at Mass at St. Patrick’s National Seminary, which was implemented by formators in Maynooth for several years, had seen three seminarians expelled for their refusal to comply, but the liturgical innovation was eventually dispensed with after a 2011 Apostolic Visitation to Irish seminaries ordered by Pope Benedict XVI.