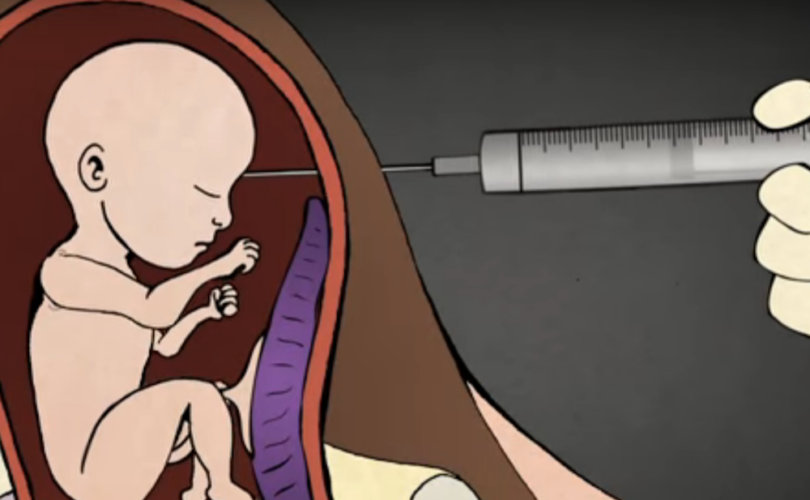 ALBUQUERQUE, New Mexico, August 15, 2017 (LifeSiteNews) – In a new undercover recording, an employee at a late-term abortion facility explains that they “euthanize” pre-born babies and then deliver them “stillborn.”

A pro-life activist from Abortion-Free New Mexico called Albuquerque's Southwestern Women's Options posing as a woman who is 25 weeks' pregnant.

A woman who answered the phone for Albuquerque's Southwestern Women's Options and identified herself as “Sue” explained to a caller from Abortion-Free New Mexico posing as a 25-week pregnant mom, “you actually would be delivering what would be a stillborn here in our office, OK?”

“What our doctor will do on the first day – on Tuesday – is she will use the medication that will euthanize the fetus,” said Sue. “So it will stop the fetal heart on that first day … you will go into labor. Well, labor’s going to be induced here in the clinic. Usually one to two days later.”

She told the caller to stay in a hotel close to the abortion facility so that if she goes into labor, she can call them.

These statements corroborate instructions a Southwestern Women's Options employee gave to a Live Action undercover investigator in its Inhuman investigation into the late-term abortion industry. She said the abortion center partners with the Plaza Inn, a local hotel, to give women obtaining abortions discounts.

“Just sit on the toilet if the baby comes,” a counselor at the same facility told a Live Action investigator in footage released in 2013.

Should a mother go into labor in her hotel room, “you'll want to unlock the door to the hotel room, get your cell phone, and just sit on the toilet,” the investigator was told. “You don't have to look at anything … you can stay on the phone with us until the doctor and nurse get there.”

When the abortion workers arrive, they “wrap” the baby “up, and we bring it back to the clinic.”

“You’d be delivering either Wednesday or Thursday here in the clinic,” Sue told the Abortion-Free New Mexico undercover activist. She said this depends on how dilated the mother is after the abortionist has inserted laminaria into her cervix. “You may be in the clinic for several hours or all day long” as the dead baby is delivered.

“We will continue to expose it by undercover phone calls, so that the existence of these procedures, and their utter barbarity, will be indisputable in the minds and hearts of more and more of our fellow citizens, and that they will take action to end abortion,” said Pavone.

“Southwestern Women’s Options uses an injection to stop the hearts of pre-born babies and a concoction of several medications to artificially induce labor in women and then sends them away to wait for their child to be born dead,” said New Mexico pro-life activist Tara Shaver.

“This precarious cocktail of medications is and has resulted in serious life-threatening complications,” Shaver continued. “In May 2011, a patient at Southwestern Women’s Options was rushed to the emergency room after her uterus ruptured during the very same procedure documented in this call. She was 35 weeks' pregnant.”

“His patients came primarily through referrals from a network of clergy that had assembled an underground railroad of sorts to clinics willing to perform abortions before it was legal — the Clergy Consultation Service on Abortion,” NM Political Report explained in a recent rare interview with Boyd. He said he hugged his nurse and thanked God when abortion was legalized across the country in 1973 thanks to Roe v. Wade.

“Women don’t have late-term abortions for frivolous reasons,” Boyd said. “They don’t just get up one morning and say, 'I’m tired of this pregnancy. I’ll call Dr. Boyd and get an abortion.' They go through an ethical decision-making process. They’re trying to figure out, 'What is best for me, for my family, the children I have, the children I hope to have, for society?'”

Boyd said his patients “are dying if they do not get the abortion” and are “women [whose babies] have severe congenital defects.”

“Late-term abortions are not, as some say, 'only done to save the lives of women,' they are performed to make Curtis Boyd huge profits at the expense of precious human lives,” said Shaver.

Boyd says he feels “a great sense of pride” that Albuquerque is known as the late-term abortion capital of America.

The human heart begins to beat at around 21 days after conception.

At 25 weeks, “head to heels, your baby now measures about 13 ½ inches,” says BabyCenter.com. “Her weight – 1 ½ pounds – isn't much more than an average rutabaga, but she's beginning to exchange her long, lean look for some baby fat.”

At 25 weeks old, babies in the womb are able to taste.

Babies in the womb can begin to feel pain when they are 20 weeks old.

Babies younger than 25 weeks old have been born and survived.