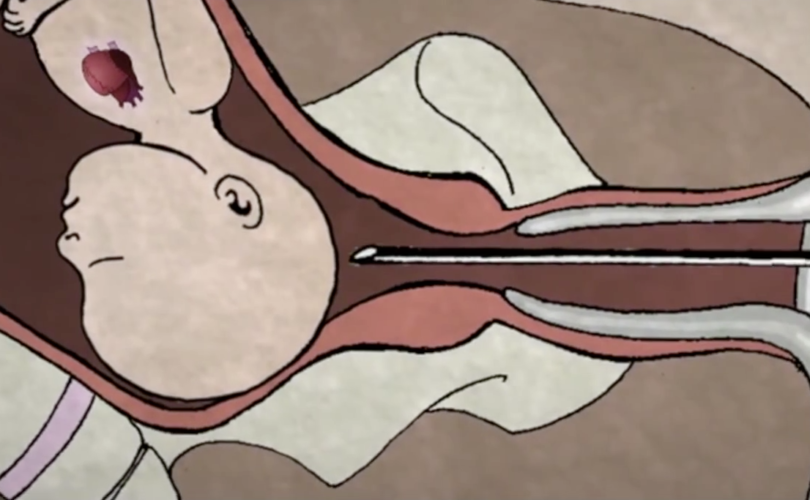 ALBUQUERQUE, NM, November 14, 2013 (LifeSiteNews.com) – A worker at an Albuquerque late-term abortion facility told an undercover reporter that stabbing an unborn child's skull with a needle is “the most humane” way to assure the baby's demise.

The unnamed counselor works at Albuquerque's Southwestern Women's Options, one of the few facilities in the nation to perform abortions in the third trimester.

A counselor then explained the process of abortion to an undercover reporter with Live Action.

The injection “is going straight into the sac, straight into the” – she pauses noticeably – “pregnancy.” Depending on how the baby is situated, the needle will pierce “the baby's bottom” or, most likely, “through the head, the cranium.”

When the mother asked if the child could feel pain, the counselor balked.

When the reporter asked how the abortion worker felt about the possibility that her victims felt intense pain, the woman responded the regimen is “necessary for the procedure to happen and, ultimately, um, safest, and kind of the most, kinda, humane way to do it.”

The process, she admitted, results in “a dead baby.”

Scientists agree the neurological circuitry necessary for the child to feel pain – which begins developing at four-to-eight weeks – is completed by week 20, or week 24 at the latest.

The site's abortionist, Dr. Carmen Landau, said many of her patients come to SWO because it is one of the few places that will perform an abortion so late in the pregnancy.

“People come from all over the country and all over the world into our clinic,” Landau said, “because in most places you cannot get an abortion after 24 weeks.”

“This facility is only one of the worst examples of the abortion industry's complete disregard for basic human rights,” said Lila Rose, Live Action's president.

Part of the video had previously been released in June as part of Live Action's series Inhuman, exposing late-term abortionists.

The new release precedes next Tuesday's election on the city's proposed Pain Capable Unborn Child Protection Ordinance, which would bar abortions after 20 weeks on the grounds of fetal pain. Polls show the measure enjoys substantial popularity in the normally socially liberal city.

“If Cecile Richards thought Albuquerque was a winning issue, she would be trying to make money on it,” Rose said. “But Planned Parenthood's fundraising e-mails are silent on this.”

Rather than raise money, the nation's largest abortion provider has quietly pumped $300,000 into the city to fight the new regulation. A pro-life website has reportedly been hacked, redirecting e-mails of its supporters to a pro-abortion organization.

On the video, Landau said the state of New Mexico doesn't have “a lot of [abortion] restrictions.”

A similar nationwide 20 week abortion ban passed the House of Representatives in June. Five months later, it has been introduced in the U.S. Senate.

Rose called the Albuquerque election “a clear-cut case of good versus evil.”