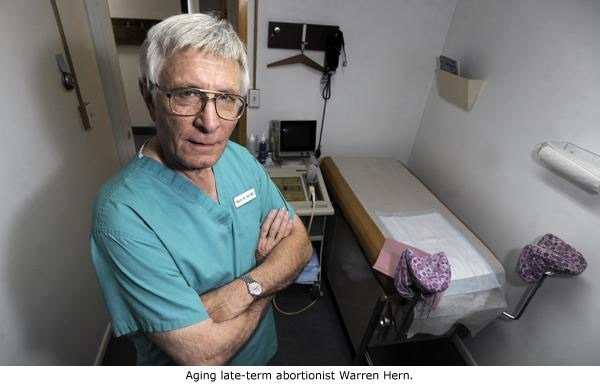 Saying “Pregnancy is a life-threatening condition” and “Women die from being pregnant,” Hern — who literally wrote the book on the practice of late-term abortion — lists the many complications that women may face when delivering children.

“Some potentially fatal problems cannot be foreseen or prevented. Pregnancy always comes with some irreducible risk of death. … Pregnancy is dangerous; abortion can be lifesaving,” Hern wrote.

He did not mention the near-100 percent fatality rate of babies because of abortion.

Focusing on Alabama, which just passed a bill that greatly expands the right to life of unborn children, Hern cited the risk faced by mothers in that state when delivering babies.

He wrote that the maternal mortality rate in Alabama was 11.9 per 100,000 in 2018. Breaking down the numbers according to ethnic groups, Hern noted that among whites the rate is 5.6 and among blacks it is 27.6. For the U.S. overall, he wrote, the rate is 20.7, suggesting that the effect of the bill would have unequal effects on black and white mothers.

The Centers for Disease Control defines pregnancy-related mortality as those deaths that occur during pregnancy or within one year of pregnancy that are not accidental or incidental in nature. According to the CDC, approximately 700 women die each year because of pregnancy-related conditions or circumstances. The CDC website indicated that about 60 percent of these deaths are preventable and listed the top five causes of maternal mortality: cardiovascular diseases, non-cardiovascular diseases, infection or sepsis, hemorrhage, and cardiomyopathy.

Difficulties in the transmission of data from state government, changes in the way causes of death are coded, and the addition of a pregnancy checkbox to the death certificate in many states have increased the number of reported pregnancy-related deaths.

Errors in reporting and overestimation of pregnancy-related deaths also has been reported.

“Whether the actual risk of a woman dying from pregnancy-related causes has increased is unclear, and in recent years the pregnancy-related mortality ratios have been relatively stable,” read a statement on the CDC website. “Many studies show that an increasing number of pregnant women in the United States have chronic health conditions such as hypertension, diabetes, and chronic heart disease,which thus puts some pregnant women at higher risk of complications,” it said.

While the CDC stated that the overall risk of pregnancy-related death is low, some women are at a higher risk. Also, it noted that the higher pregnancy-related mortality ratios during 2009-2011 were due to an increase in infection and sepsis associated with the H1N1 influenza pandemic of 2010-2011.

Citing the journal Obstetrics & Gynecology, Hern wrote that the abortion mortality from 1998 to 2010 “found that for the 16.1 million abortions performed during that time, the overall death rate was 0.7 per 100,000 procedures. The death rate for early-abortion procedures — those that took place within the first eight weeks of the pregnancy — was less: 0.3 per 100,000. Pregnancy is dangerous; abortion can be lifesaving.”

Alabama’s Human Life Protection Act, signed last week by Gov. Kay Ivey, greatly expands protections for unborn children and would impose a life sentence on abortionist who commit an illegal abortion. However, it allows abortion if there is a “reasonable medical judgment” that the pregnancy poses a “serious health risk” to the mother. Abortion is legal for a mother if there is a “reasonable medical judgment” making it necessary to “avert her death or to avert serious risk of substantial physical impairment of a major bodily function.”

Stating that since pregnancy is itself a “serious health risk” to mothers, Hern asked, “Could a doctor who determines that a woman is pregnant also determine, as a consequence of that pregnancy, that a ‘serious health risk’ exists? Could that doctor then end her pregnancy without fear of prosecution?”

Ultimately, Hern theorizes that the goal of the Alabama law is not only to trigger a challenge to Roe v. Wade but to discourage abortion in the state entirely. Writing that “vagueness” is written into the law, even while its intent is to “prohibit and prevent abortions,” he asks, “But does it?”

Since the Roe v. Wade decision of 1973, abortion rates have increased. Also since then, public health officials stopped looking for abortion-caused deaths. Abortion-caused deaths are hard to trace because the majority of the deaths do not occur at abortion facilities but afterward when secondary reasons are routinely identified as the cause of death.