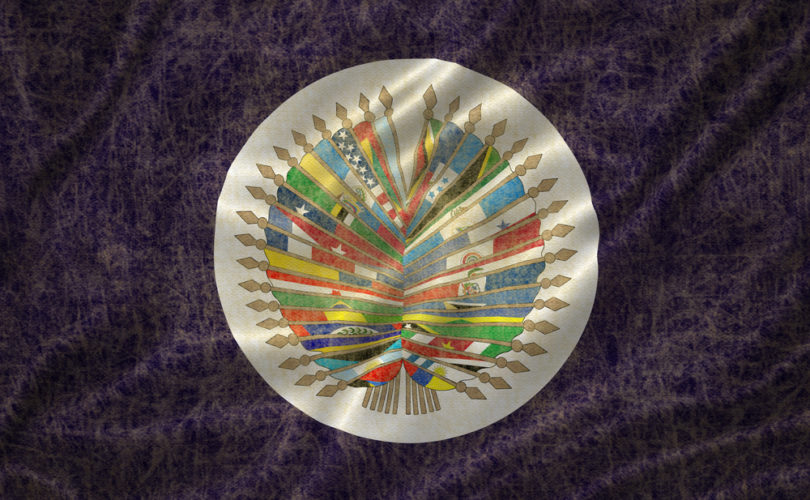 The flag of the Organization of American States. A Bolivian pro-family leader says the number of countries that rejected same-sex unions at the General Assembly was “historic."Yuriy Boyko/Shutterstock

ASUNCION, Paraguay — In what local media are calling a “clear and numerous response,” many Latin American countries rejected recommendations to approve same-sex unions during the Organization of American States General Assembly held last week in Paraguay.

The debate began after Brazil presented a proposition calling all member states to “avoid interference in the private life” of “homosexuals, bisexuals and transsexuals.” Thirteen countries out of thirty-four, including the host country Paraguay, expressed reservations against the proposition, fearing that its approval would lead to the legalization of same-sex unions.

According to assembly documents, the US said it “decidedly supports” the resolution, and so did twenty other countries, which posed no objections to it.

Guatemala and Ecuador said they did not consider “the non-recognition of marriage between people of the same sex” as a “discriminatory practice,” while San Vicente and Granadinas, Jamaica, and Santa Lucia expressed concern that the term “gender expression” was “ambiguous” and “not fully defined nor accepted internationally.”

Trinidad and Tobago said it “couldn’t support this resolution” as in its legislation “acts of sodomy, be it between same-sex couples or heterosexuals, are illicit.”

Sonia Vera, president of Life and Health Foundation in Bolivia, an organization affiliated to Human Life International, told LifeSiteNews that the number of countries that made reservations to this resolution was “historic.”

“The fact that they gave us a workshop to discuss only matters of life and family is also historic,” she said. “This is a big achievement, something that had never happened before.”

On June 2 and 3, just days before the summit started, the people of Asunción gathered to march in front of the event’s venue asking the Organization of American States (OAS) to “defend life and family.”

“The Paraguayan people oppose these documents, as they will damage not just the families in our country but also those throughout the continent,” said the march’s organizers in a press release.

The groups also asked that “the right to life be respected from conception in the maternal womb until natural death.”

In addition, over 47,000 people signed a petition on CitizenGo asking the OAS to “defend the dignity of Latin America in presence of the imposition from feminist and homosexual pressure groups.”

Alfonso Aguilar, executive director of the American Principles Project's Latino Partnership, blasted the U.S. Ambassador to the OAS for focusing on the homosexual agenda.

“No one condones homophobic behavior, anywhere; but what this administration is pushing through the OAS is an aggressive agenda that undermines the cultural and religious values of the majority of people in Latin America,” he said in a press release.

“I call on Congress to take action and suspend further funding of the OAS until this administration stops advancing its radical agenda through this organization and decides instead to defend freedom and democracy in the region as the United States always has.”

“It would seem that all we talk about is this issue,” Vera told LifeSiteNews. “They say we will discuss poverty and how to eradicate it, the development of the peoples, but in the end we always discuss the same thing.”

The issue of abortion was raised by a report urging member states to fulfill the goals of the Inter-American Program on the Promotion of Women’s Rights and Gender Equity and Equality, which seeks to “develop protocols to… allow therapeutic abortion” throughout the region. The report also mentioned having “access to contraceptive methods” and addressing “the problem of teen pregnancies and LGTBI rights.”

During the General Assembly’s closing ceremony, OAS Secretary General José Miguel Insulza, a Chilean socialist, reminded the delegations that the resolutions were non-binding and that each country should legislate on life and family issues in accordance with its culture and values, as imposing an agenda would only “bring on more annoyance.”

Insulza said that “criminalization [of abortion] is punitive against women. Nobody aborts because they want to.”

“I am against abortion,” he said, “I don’t know anyone who is in favor, but that’s not the point, the point is it happens and we must deal with it. I ask for a more open mind regarding this issue.”