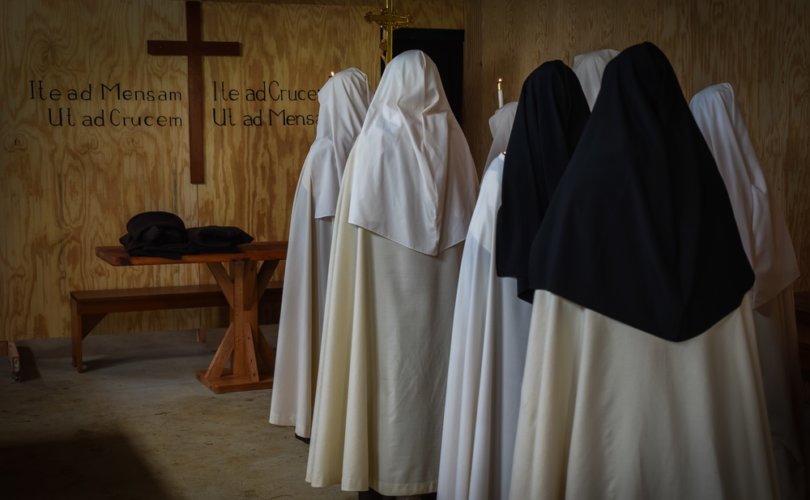 FAIRFIELD, Pennsylvania, August 13, 2019 (LifeSiteNews) – In an age where religious professions are in decline, especially in the United States, one order is looking back in time to buck the trend. The Discalced Carmelites have turned from the modern Church’s reforms of the 1960s and embraced ancient traditions – particularly the traditional Latin Mass. Now their order is booming, with multiple at-capacity monasteries dotting the eastern U.S.

Since 2000, the Carmelites have been faced with the sort of challenge many religious orders pine for: a boom in vocations. In that year, the nuns moved into the monastery at Elysburg, Pennsylvania from their original home in Nebraska, which they soon outgrew. They were thus granted permission to take over another declining Carmelite monastery, the Carmel of St. Joseph and St. Anne, in Philadelphia — and filled that one with vocations as well. So finally, with the community having overflowed its lodgings twice, the Carmelites received permission last summer from His Excellency Ronald Gainer, bishop of the Diocese of Harrisburg, to expand operations again, this time constructing a new monastery from the ground up.

That’s how the Carmel at Fairfield, still under construction but already in operation, was born.

Women interested in a life with the cloistered Carmelites must meet a number of qualifications. Postulants need a high school education and to be in good health, coming in at an age range of 17 to their late twenties — though Mother Stella-Marie of Jesus, who heads the Fairfield monastery, told LifeSiteNews that inquirers tend to be between 17 and 24.

Currently, the monastery at Fairfield has ten professed members, with more on the way from around the globe, including as far as Sweden.

The cloistered nuns at the Carmel in Fairfield close themselves off from the world and devote the rest of their lives to strict silence, arduous labor, and prayer. Once they profess their vows, their faces may not be seen in photographs until after they die. When LifeSiteNews traveled to Pennsylvania to profile the monastery, Mother Stella gave her interview from behind a heavy grate – the same grate through which the Carmelites are permitted to speak to their family members a single time per year.

“I think the young women are drawn to beauty in the liturgy. They know that if God exists, if God is on our altars, if God is within the Holy Sacrifice of the Mass, then He needs to be worshiped as He deserves: with beauty and reverence,” she said of what she thinks draws young women to the Carmelites in particular. “They see that we have that here in our monastery, and they want to be a part of that. They also want something that is authentic, that goes back to the time of our holy mother, St. Teresa.”

St. Teresa of Avila (1515–1582), whom the Carmelites revere as their patroness, is one of the order’s most distinguished saints. A famous mystic and foundress of many Carmelite houses, she also wrote the famous works The Way of Perfection and The Interior Castle. Pope Gregory XV canonized her in 1622, and Pope Paul VI declared her a doctor of the Church in 1970.

“One of the unique aspects of our monastery,” Mother Stella elaborated, “is that we do have the extraordinary form of the Mass. We also have the traditional Divine Office. We pray the Office in Latin. We have permission also to pray the traditional form of the Carmelite Office, and young women are very much drawn to that.”

The Carmelites had always had the Latin Mass up until the Second Vatican Council, Mother Stella told LifeSiteNews, so the transition back to form was “like hand in glove.” She said, “As soon as we took on the extraordinary form of the Mass and we returned to the traditional Carmelite rite, just everything made sense. All of our customs — we understood why we had them, because they all flowed from the liturgy, whereas before that, there had been a disconnect there.”

Re-embracing the traditional Mass, Mother Stella explained, effected a “complete explosion of grace and joy for the sisters.” The nuns switched from the Novus Ordo  in 2000, “and ever since then, we’ve had a great increase in vocations, and the spirit of the community has been one of joy and growth in the spiritual life.”

With the Church’s ancient liturgy and traditions now firmly ensconced in the order, “young women are writing, are knocking at the door to enter,” said Mother Stella. “The growth is very clear and very palpable.”

Nor should the Latin Mass remain confined to the monasteries, Mother Stella insisted. On the contrary, “it should flow out into the world. And it starts with the monasteries, and then it will flow out to families, and even to the parish life also.”

Per their website, the Fairfield Carmelites “are building a monastery to last the ages.” The project comprises only “authentic materials” — “stone masonry, timber framing, slate, plaster, and reclaimed wood for flooring.” Justin Money, a skilled stonemason and the project’s supervisor, explained to LifeSiteNews that the techniques involved in the monastery’s construction are meant to last centuries. They also take a long time.

“There are very few modern innovations that are able to speed up our work here,” Money said. “Every stone has to be individually selected, shaped, and placed on the wall. That essential act of choosing the next stone, dressing it, and fitting it in — we’re doing the exact same thing that people did when they were building Notre Dame.”

The painstaking nature of the construction makes for a good parallel to the ancient liturgies and customs that will fill the monastery when it’s finished. The buildings’ endurance speaks to the rootedness of Catholics and their traditions in the land, spanning generations of continuous, unbroken worship.

“This is the first of hundreds of thousands, perhaps millions of stones,” Money explained, “that stonemasons will lay on this monastery long after I’m dead. What a privilege to be there at the start, to be part of a vision that is going to continue well past my lifetime. I hope that my grandchildren, my great-great-grandchildren will come to this monastery long after I’m gone and say, you know, ‘Our great-grandpa played a part in this.’”

Mother Stella did not mince words regarding the importance of the contemplative orders. She told LifeSiteNews that the Carmelites follow the example set forth by Christ in chasing a demon from a possessed child whom His disciples could not cure. In Matthew 17:21, Christ admonishes his followers, saying, “[T]his kind is not cast out but by prayer and fasting.”

“Here our Lord was extolling the monastic life,” Mother Stella explained. “Young women know that there are certain evils out in the world that can only be healed in this way — just through prayer and through fasting.”

In the Body of Christ, Mother Stella declared, “the missionaries are the hands and the feet, and they do all the very hard manual labor — but they could never do what they do without the heart. And the heart of the Church is the contemplative life.”

What, LifeSite asked, would happen if the contemplative orders were to vanish, as, indeed, many orders today are? Mother Stella responded from behind the grate: “I think that there would be a complete collapse of the faith throughout the whole world if there wouldn’t be the contemplative monasteries to be praying for those out in the world who are striving to convert souls to Christ. It would be absolutely impossible.”