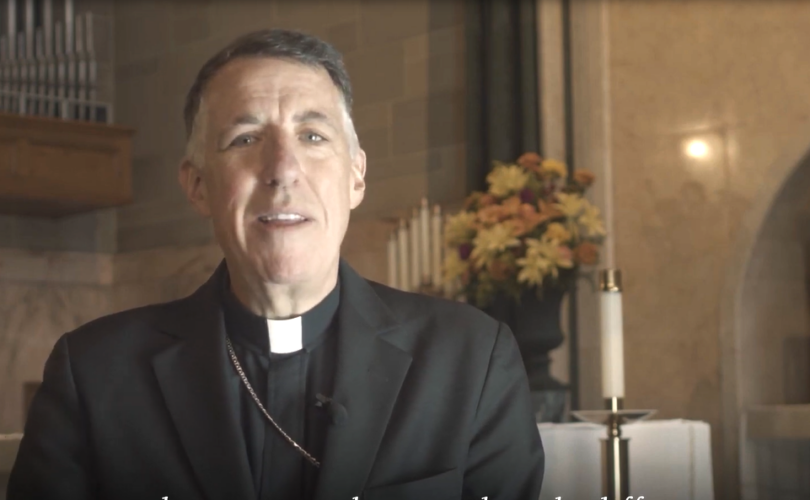 Emily Sateary, who attends the church for First Friday and First Saturday Latin Masses and has petitioned for a reversal of the decision, told LifeSiteNews that she first heard the news on November 4 during a sermon by the church’s pastor, Father Damian Breen.

Bishop James Checchio had reportedly informed Fr. Breen that the Traditional Latin Mass would be discontinued from the First Sunday of Advent onward, but Sateary told LifeSiteNews that details explaining the decision, which has not yet been “officially” announced, are lacking.

She said she was also “very surprised” about the decision because she recalled that after the Latin Mass-suppressing motu proprio Traditionis Custodes was issued a little over a year ago, Bishop Checchio had said that he was “very solicitous” that the Traditional Latin Mass continue to be offered in his diocese.

The diocese now only permits celebration of the Traditional Latin Mass on Sundays in the Shrine Chapel of the Blessed Sacrament in Raritan, New Jersey, which is under the pastoral care of the Congregation of the Oratory of St. Philip Neri.

While Bishop Checchio has not confirmed the reason for his decision, it is noteworthy that Traditionis Custodes directed bishops to set aside “one or more locations” which are not “parochial church[es]” where the faithful can attend the Latin Mass.

Sateary wrote a letter to Bishop Checchio on Monday, signed by 50 Catholics, testifying to the necessity of the Traditional Latin Mass and its “extreme” importance for Catholics’ faith.

“The Latin language and the ad orientem position of the priest encourages one to turn away from others and focus on God alone. The silence and chanting aid the faithful in emptying our minds of the noise of the world to fill our minds, hearts, and souls with the love of Jesus Christ and His sacrifice on Calvary,” Sateary continued.

“The numerous prayers asking for God’s mercy and the rubrics of the Traditional Latin Mass remind us to die to ourselves, contrary to what our modern culture tells us. Most importantly, the utmost reverence for the Holy Eucharist in the Traditional Latin Mass instills in us the need to humble ourselves before our King and Creator, and give Him all of our love, respect, and adoration.”

The Diocese of Metuchen’s Latin Mass community is asking for prayers for Fr. Breen and the faithful of Corpus Christi.

Since Traditionis Custodes was issued, at least 73 dioceses around the world suppressed Latin Masses, with about a third of those dioceses having canceled all Latin Masses, according to a website tracking its implementation.

A number of faithful clerics and laymen have decried Traditionis Custodes as “illegitimate” and have urged priests to ignore it entirely. Esteemed liturgist Dr. Peter Kwasniewski maintains that true obedience to God requires that we disobey Traditionis Custodes, and that we are “obliged to resist” it.

During a speech at the 2021 Catholic Identity Conference, Kwasniewski highlighted St. Pius V’s bull Quo Primum, which declared of the Tridentine Mass, “In virtue of Our Apostolic authority, We grant and concede in perpetuity that … this Missal is hereafter to be followed absolutely, without any scruple of conscience or fear of incurring any penalty … ” and that no priest is “obliged to celebrate the Mass otherwise than as enjoined by Us.”

“We likewise declare and ordain … that this present document cannot be revoked or modified, but remains always valid and retains its full force … Would anyone, however, presume to commit such an act [i.e., altering Quo Primum], he should know that he will incur the wrath of Almighty God and of the Blessed Apostles Peter and Paul.”

Kwasniewski has asserted that Traditionis Custodes’ “fundamental message” is: “What earlier generations held as sacred does not remain sacred and great for us too, and it can be all of a sudden entirely forbidden and considered harmful. It does not behoove all of us to preserve the riches which have developed in the Church’s faith and prayer, or to give them a place at all.”

Archbishop Carlo Maria Viganò has gone so far as to state that “Those who limit themselves to expressing reservations or criticisms of Traditionis Custodes and of the Responsa fall into the trap of the adversary, because by doing so they recognize the legitimacy of an illegitimate and invalid law … ”

“Traditionis Custodes and the Responsa must simply be ignored, returned to the sender. They must be ignored because it is clear that their intention is to punish Catholics who remain faithful, to disperse them, and to make them disappear,” Viganò continued. He noted that such “traditionalists” “oppose heterodox doctrines condemned up until Vatican II, which it made its own.”

In addition to being offered at the Shrine Chapel of the Blessed Sacrament in Raritan, the TLM is offered in New Jersey by SSPX priests at St. Anthony of Padua Chapel in North Caldwell, about an hour north of Corpus Christi Catholic Church.