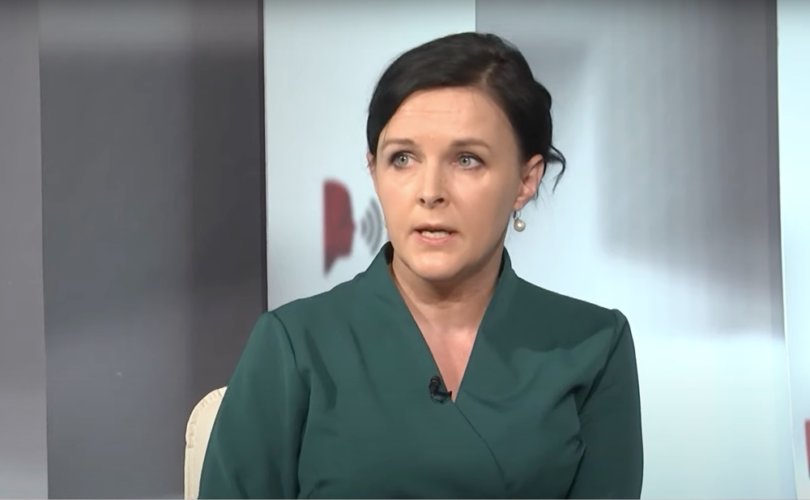 RIGA, Latvia (LifeSiteNews) – A Latvian MP has spoken out against the country’s new law banning all unvaccinated MPs from performing their elected duties.

Latvian member of parliament (MP) Julija Stepanenko, who has been suspended from her duties for refusing to get vaccinated against COVID, spoke to Estonian Catholic activist Varro Vooglaid this week following last Friday’s decision by the Saeima, Lativia’s parliament, to ban all unvaccinated MPs from participating in the Saeima’s parliamentary sittings, its committees, and other parliamentary institutions, effective Monday.

Stepanenko explained that it took just “two days” for the policy to be passed and implemented, and in addition to being barred from carrying out their duties, including any remote work, the measure also prohibits unvaccinated MPs from even entering the parliament building and from receiving their salary.

According to EuroNews, Latvia had previously imposed vaccine certificate mandates for workers in health care, education, and social care, but recently expanded the policy to include all positions that involve contact with customers or where the employer deems a mandate necessary.

While describing the devastating impact of Latvia’s conduct, Stepanenko said, “thousands of workers have come across the same problem, like me, yesterday.”

“They were banned from work; they were canceled from working… Even in the remote jobs.”

Stepanenko explained that, although the unvaccinated have not been officially fired, “they will not receive any salary” and that “they are [being] made to change their mind [through economic coercion].”

“This is the cruelest thing we have seen, actually,” said Stepanenko. “There are people going for the vaccine because they are forced to, because they actually have to feed their family and take care [of] their kids.”

Stepanenko, who is one of four MPs who have been officially named and put on unpaid suspension for remaining unvaccinated, insisted that regardless of the sanctions placed against her, she will not capitulate to the dictatorial demands of her government.

“When people are at a dead end, they [get the vaccine] because there is no other choice. This is economic torture. Or moral torture, call it whatever you want, but that’s the way it is,” stated Stepanenko in an interview with Latvian news outlet Neatkariga. “[But] I will not change my mind.”

Stepanenko outlined that she has received negative COVID tests to be “able to legally prove that I do not endanger my colleagues,” while also mentioning that she “put forward proposals for a proportionate means by which Members can retain their rights.”

“If the Bureau needed to make sure I was safe, I was committed to testing at my own expense every hour and a half,” continued the politician. “But Members showed their choice by rejecting my proposals.”

According to Neatkariga, the Latvian Legal Bureau of the Saiema has admitted that the newly installed measure “could conflict with the Constitution,” and when Stepanenko was asked if her plan to fight the measure involved invoking the constitution in her defense, she said “It would not be right to talk about the strategy at the moment, but of course, I am ready to fight for myself and for the rights of those who are being suspended today just like me. I am doing it and I will keep doing it.”

“I am supported by relatives, friends, colleagues. Regardless of their own status and beliefs. I have enough moral and mental resources to continue my struggle. I would like to wish everyone for whom this is a difficult day not to despair, to unite. I know that the fight will not be easy, but I am sure that we will definitely win when the time comes,” concluded Stepanenko.

Latvia is not the only European country that has recently garnered worldwide attention for their extreme COVID-19 measures.

Last month, LifeSiteNews reported that Lithuania, a historically Catholic Baltic nation which bucked Soviet oppression in the 1980s, has now effectively created a two-tiered society by requiring its citizens to show a government-issued COVID-19 health pass to participate in most aspects of society, including but not limited to: “non-essential shops,” public indoor spaces, public gatherings, private parties, larger events, cafes, restaurants, shopping malls, many sectors of employment, and beauty shops.

Despite approval from various health agencies worldwide, all currently available COVID-19 vaccines are experimental, with clinical trials not set for completion until 2023.

Further, according to data from the World Health Organization, the European Union, and America’s Vaccine Adverse Event Reporting System (VAERS), the COVID-19 injections have been linked to tens of thousands of deaths and millions of injuries worldwide, totaling more than all other vaccines combined since 1990.