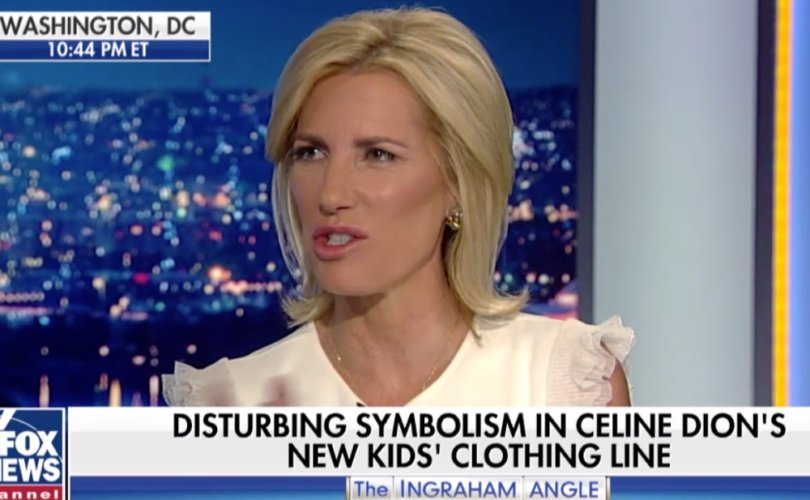 “Unless you’re a member of the Addams Family or a satanic cult, why would you dress your infant in this [brand]?” wondered Arroyo. “It’s bizarre.”

“But they’ve admitted what their goals are,” said Ingraham. “They want a new order. They want to affect the culture.”

A titanic error in judgement and taste

The duo couldn’t resist making references to Dion’s hit My Heart Will Go On, the theme song from the blockbuster 1997 movie Titanic. “Her heart may go on, [but] her sales are going to go the way of the Titanic,” quipped Arroyo.

The EWTN host also suggested that Dion’s new brand should have an insignia on each of its shirts. “You know Izod has the crocodile? I want the sinking ship from Titanic because that’s where this line is headed.”

Dion introduced her new fashion line, a joint partnership with an Israeli manufacturer of children’s clothing, with this “very bizarre ad,” explained Arroyo, referring to the now viral commercial which has attracted so much criticism.

“She walks into a maternity ward, blows glitter around the room. All the boys are in blue, the girls are in pink, [but] not after she does her magic.”

“And then in one of the bassinets, this big voodoo doll appears,” continued Arroyo. “It’s a very strange line” of clothing for young children.

As pictures of the clothing were displayed for viewers, Arroyo pointed out, “There are skulls in the collection. Why you would put babies in skulls? I don’t know.”

Ingraham noted that one of the outfits looks like it had been inspired by Antifa, the violent anarchist group famous for disrupting conservative events while shrouding their identities by covering their faces with scarves.