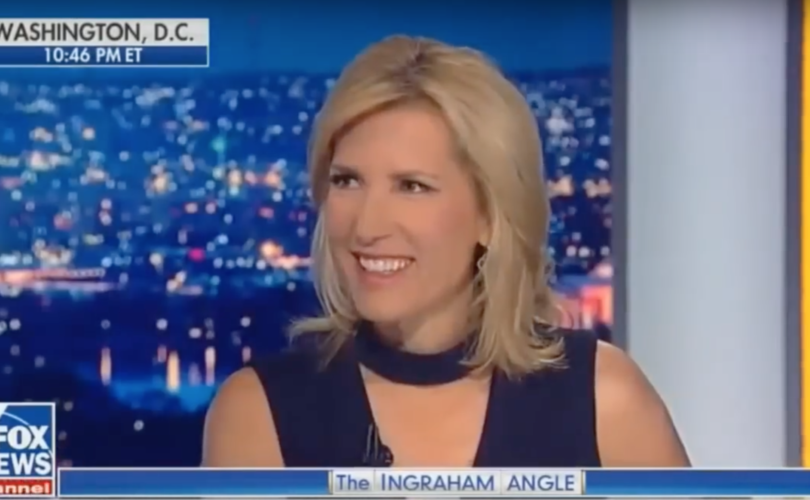 WASHINGTON DC, March 15, 2018  (LifeSiteNews) – In a televised conversation with EWTN’s Raymond Arroyo about about the Vatican doctoring a photo of a letter by Pope Benedict so that it appears he is praising Pope Francis, Laura Ingraham was moved to ask, “What is this all about . . . Da Vinci Code stuff?

While said in jest, Ingraham merely expressed aloud what many ponder inwardly.

Why do Catholics need to be told that Pope Francis is “A Man of His Word?”

The Fox News Ingraham Angle segment featuring Arroyo began with a discussion about a soon-to-be released movie, Pope Francis – A Man of His Word.

Ingraham wondered, “What’s going on with this PR campaign that seems to be launched by the Vatican five years,” after Francis became Pope?

An incredulous sounding Ingraham asked, “Do you have to say that?”  After all, “You’re the Pope.”

Arroyo explained that an award-winning documentarian, Wim Wenders, “was recruited to do this by the Vatican.”

The 72 year old German filmmaker, though born into a Catholic family, has been married five times.  In addition to documentaries, Wenders has also produced music videos for U2 and Talking Heads.

“Why is the Vatican funding a film about their boss?” asked Arroyo, answering, “It’s a puff piece,” before going on to call it a “touchy-feely video.”

“Some are saying this is an effort to insulate the Pope and to protect him from criticism,” continued Arroyo, “which he has encountered over the last five years because of the changes to church teaching, practice and doctrine — and that’s a big concern for some.”

Brewing scandal, emphasizes––rather than minimizes––question of continuity with former Popes

“The Vatican is embroiled now in its own difficulty,” said Arroyo.  “Today, the news came out — and this is a big blunder, a black eye for the Vatican — There was a letter they released from Pope Benedict, affirming that Pope Francis and he are in continuity, internal continuity.”

“They smudged out the end of [the letter] so you couldn’t read what was next.  What people don’t realize is those eleven books of theology that you see on the right hand side of your screen — this was designed to bolster Pope Francis’ theological heft, and here you have Pope Benedict saying, ‘We are in continuity.’”

“It turns out, if you read the rest of the letter, which no one could read until today, it said, ‘I don’t have time to read the books, so I really can’t pass judgement on these.’”

“That was always going to cause a problem,” she continued, “I mean, you’re dealing with two Popes.”

“It doesn’t cause a problem if you don’t need the former Pope to vouch for you,” said Arroyo. “And apparently, now, the Vatican feels it would help Pope Francis.”

“When Benedict and John Paul wrote their big biographies,” noted Ingraham earlier in the segment, “those things were huge bestsellers.  What happened to this Pope? Is he moving a lot of books?

Unlike his immediate predecessors, said Arroyo, Pope Francis “has not had a New York Times bestseller.”