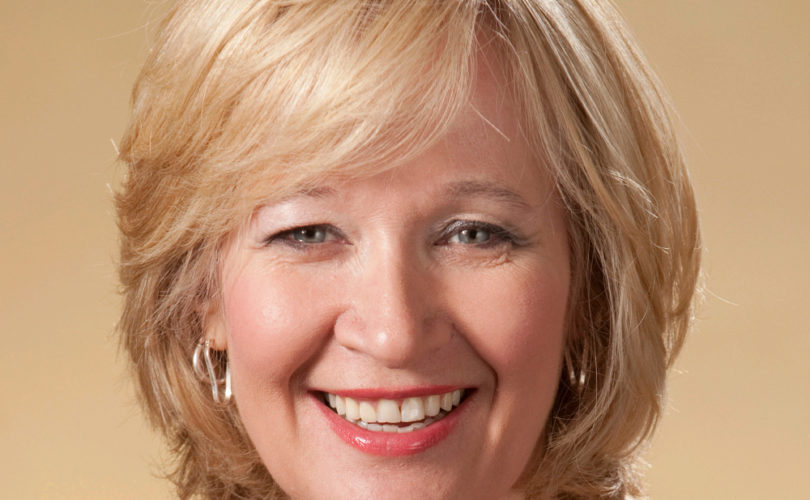 OTTAWA, April 9, 2015 (LifeSiteNews.com) — Laureen Harper, Conservative Prime Minister Stephen Harper’s wife, has come out as an ambassador for a controversial pro-homosexual organization, writing in a letter that she wore pink yesterday — on the “Day of Pink” — to not only support the organization, but kids who decide to identify as homosexual.

Quoting Dan Savage, an infamously vulgar homosexual activist and founder of the It Gets Better Project, Mrs. Harper stated: “Now, I recognise that it’s so easy for us adults to say to our children, ‘It gets better’ and ‘Hang in there.’ We’ve lived long enough to know this to be true. But, sometimes parents aren’t the only people in a teen’s life who need to communicate this. Sometimes, what it takes is a classroom, or a sports team, or a school club to come together in solidarity and wear pink once a year to remind their peers in crisis that they belong.”

Gwen Landolt, national vice-president of REAL Women of Canada, criticized Mrs. Harper for using her prominent position to “promote a highly controversial issue that is highly offensive to conservatives.”

On the other side of the spectrum, some LGBT activists have boycotted the Day of Pink because they say Mrs. Harper is a poor choice as the face for a pro-homosexual campaign.

“@LaureenHarper is the #dayofpink ambassador, while her husband's gov't uses the Senate to kill #C279 and promote transphobia #pinkwashing,” gay activist Ariel Troster tweeted. A trans activist tweeted: “Choosing Laureen Harper (wife of PM Harper) to be the face of #DayofPink was a HUGE misstep. Our govt is legit harmful to trans people.”

The Canadian Centre for Gender & Sexual Diversity (CCGSD), the organization behind the Day of Pink, works exclusively to eliminate what it calls “homophobia” and “transphobia” in schools, not bullying over other issues such as economic status, body size, or intelligence. Participants in the Day of Pink are asked that they uniformly wear pink to “celebrat[e] diversity and rais[e] awareness to stop homophobia, transphobia, transmisogyny.”

The CCGSD’s idea of diversity includes running a field trip for high school students in 2011 that included a drag show. The CCGSD also partners with pro-abortion groups such as Planned Parenthood and pro-prostitution groups such as Maggie’s Sex Work, as well as numerous pro-homosexual groups. On top of this, the organization offers an LGBTQ K-8 curriculum to teach children “new ideas about families” that include two women or two men “being able to have/make a family together.”

Principals in one Ontario school board are using the Day of Pink to focus on homosexuality as well, telling students that wearing pink will help to end “bullying, discrimination, homophobia, transphobia, and transmisogyny.”

Critics such as Lou Iacobelli, a former teacher now living in the Toronto area, said the day is about pushing the “full acceptance and normalization of homosexuality” on kids.

“[Homosexual activists] aren't fighting bullying and discrimination against anybody else but just for the LGTB community. Do they care about Christian discrimination? Do they do anything to try address the way women are treated in Moslem countries? Do they travel to Moslem countries to fight LGTB harassment and homophobia? The answer is no, no and no,” he said.

Landolt agrees, saying that the day is more about indoctrinating kids into accepting homosexuality than stopping bullying.

Landolt criticized Mrs. Harper for using her position to “promote an agenda which is not part of the political party of which her husband is the leader,” adding that the move will only alienate the conservative base.

“It’s shocking that she has put her foot into this political minefield,” Landolt said, adding that there is no doubt that Mrs. Harper has come out in support of homosexuality.

The Day of Pink originated in 2007 when two high school students stood up for a male student bullied for wearing a pink shirt to school. They purchased dozens of pink shirts for classmates who wore them to school the following day to show support for the bullied student.

While homosexual activist organizations such as CCGSD, Egale, and PFLAG like to draw a link between so called ‘homophobic’ bullying and suicide, arguing that events such as Day of Pink exist to protect homosexual students, research published last year from Toronto’s Sunnybrook Health Sciences Centre found that bullying alone is a rare cause of suicide among youths.

Of 94 youth suicides included in the study, bullying was the “only identified contributing factor in fewer than 5 deaths.” The most common causes of youth suicide were found to be conflict with parents (21%), problems with girlfriend or boyfriend (17%), problems in school (11%), and criminal or legal problems (11%). Mental and sometimes physical illness was detected in 79% of cases while depression was detected in 40%. Researchers concluded that their study “challenges simple cause-and-effect models that may suggest that suicide arises from any one factor, such as bullying.”

The three most common causes of bullying in school according to one survey from the Toronto District School Board are body image (38%), grades (17%), and cultural background (11%). Despite this evidence, homosexual activists have convinced the public that sexual orientation is the leading cause of bullying.

Iacobelli said if he were still teaching today, he would tell his students to ignore all the Day of Pink hype. “I would let them know they are being manipulated and indoctrinated,” he said.