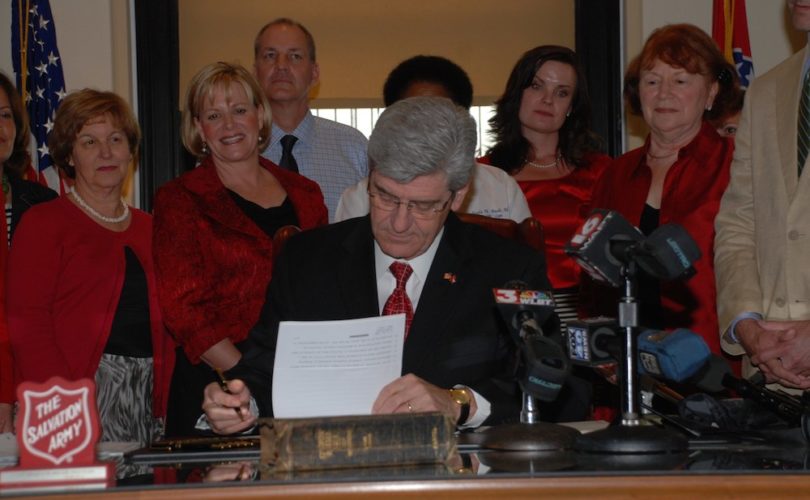 Mississippi Gov. Phil Bryant signs HB 1390, a bill that requires all abortionists to have admitting privileges at a local hospital, on April 16, 2012.Mississippi Governor's Office

A divided three-judge panel of the Fifth Circuit Court of Appeals has held that a Mississippi law requiring abortionists to have admitting privileges to a local hospital is unconstitutional, because it would close the state's last remaining abortion facility.

The 2-1 ruling from the appeals court, based in New Orleans, effectively granted a reprieve to the Jackson Women's Health Organization (JWHO), where only one abortionist has admitting privileges as required by law.

The panel's two-judge majority held that closing the only abortion office in the state would pose an “undue burden” to women seeking abortion, a violation of the U.S. Supreme Court's Casey decision.

Lawyers representing the state argued that the law placed no such burden, since women could travel to neighboring states to have an abortion. Judge Emilio Garza, a Reagan appointee, agreed in his dissent, “The sole act of crossing a state border cannot, standing alone, constitute an unconstitutional undue burden on the abortion right because the Constitution envisions free mobility of persons without regard to state borders.”

But his colleagues – Stephen A. Higginson, an Obama appointee, and E. Grady Jolly, who was appointed to the court by President Reagan – said the law “effectively extinguishes that right within Mississippi’s borders” and creates “a patchwork system where constitutional rights are available in some states but not in others.”

Republican Governor Phil Bryant promised a speedy appeal. “This measure is designed to protect the health and safety of women who undergo this potentially dangerous procedure, and physicians who provide abortions should be held to the same standards as physicians who perform other outpatient procedures,” he said. “I will continue working with the Attorney General as his office petitions the entire court to hear this case.”

Governor Bryant has stated in the past, “I clearly said I want to end abortion in Mississippi.”

The abortion lobby was overjoyed by the decision. Nancy Northup, president and CEO of the Center for Reproductive Rights – the New York-based abortion advocacy group representing the Jackson abortion facility – said the ruling assures that women“will continue to have access to safe, legal care for now in their home state.” But she warned, “there is still only one clinic in the entire state, and it is still threatened by a law advanced by politicians over the opposition of respected medical associations, with the sole intent of closing that clinic permanently.”

The abortion facility's owner, Diane Derzis, has shown no signs of backing down. She has said, “I feel like God wants me to do this job.”

Despite the setback, today's opinion affirmed that “there is indeed a rational interest of the State in protecting the health of its citizens.” Mississippi Right to Life has accused the facility of violating state law in its use of RU-486, and its patients have been transported out of the facility by ambulance as recently as August.

The decision states it is not applicable to other states with similar laws, such as Texas. “Nothing in this opinion should be read to hold that any law or regulation that has the effect of closing all abortion clinics in a state would inevitably fail the undue burden analysis,” it said.

The Fifth Circuit upheld key provisions of the Texas law in March, saying requiring women to drive somewhat farther to an abortion facility – perhaps as much as 150 miles – does not substantially burden their ability to have an abortion, safeguarded by the Supreme Court's Casey decision.

That law, H.B. 2, which Gov. Rick Perry signed into law last July, is expected to lower the number of abortion facilities from 44 to six when its admitting privileges provision takes effect this fall.

The sponsor of a similar bill in Louisiana, State Rep. Katrina Jackson, D-Monroe, said it should not affect her state, either, since at least two of the state's abortion facilities will remain open under its terms. Republican Gov. Bobby Jindal signed the law, which will go into effect on September 1.