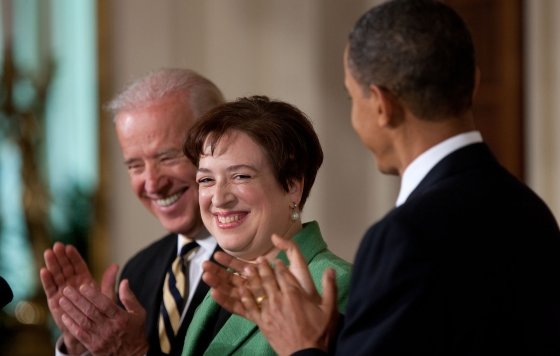 WASHINGTON, D.C., May 1, 2015 (LifeSiteNews.com) – Gay “marriage” may be one of the most divisive social issues facing the country, but it has succeeded in uniting rabbis, black evangelicals, legislators, judges, and ordinary Americans from all walks of life on one point: Justices Elena Kagan and Ruth Bader Ginsburg would violate judicial ethics by deciding the case.

A diverse coalition of Americans has demanded the two liberal justices recuse themselves from ruling on the Supreme Court case deciding whether the Constitution confers an inalienable right to same-sex “marriage,” Obergefell v. Hodges.

The Louisiana state House of Representatives unanimously passed a resolution on Monday stating that both justices have commented on the underlying issue, disqualifying themselves from rendering a decision.

“Justices Ginsburg and Kagan have each officiated highly publicized same-sex marriages that would potentially be affected by the ruling in these cases,” Concurrent Resolution 85 stated. “Therefore, justices thus may have a predisposition to vote in these cases to validate the marriages they have performed.”

That is but the latest salvo from those who believe both justices' impartiality would be questioned if they were to cast a vote on redefining marriage.

Rabbi Yehuda Levin, a values spokesman for the 850-member Rabbinical Alliance of America, lamented that Kagan and Ginsburg have “not had the grace, or decency” to step aside. They called on Chief Justice John Roberts and Congressional Judiciary committees to “have the courage and conviction to demand that the justices be disqualified.”

“It’s an issue of simple fairness,” they said.

The Coalition of African-American Pastors (CAAP) launched a petition to Chief Justice John Roberts, asking that “Justice Ginsburg and Justice Kagan disqualify themselves from involvement in this case or that you take the action needed to protect the integrity of the Court.”

The heart of the issue is whether the two liberals have broken the judicial code of conduct by not stepping aside in this contentious case.

Canon 3A(6) of the Code of Conduct for United States Judges says that “a judge should not make public comment on the merits of a matter pending or impending in any court.” 28 U.S.C. sec 455(a) mandates that a Justice “shall disqualify himself in any proceeding in which his impartiality might reasonably be questioned.”

Ginsburg, the first Supreme Court justice to perform a same-sex “wedding,” told The Washington Post she intended the nuptials to send a political message. “I think it will be one more statement that people who love each other and want to live together should be able to enjoy the blessings and the strife in the marriage relationship,” she said.

She later said redefining marriage embodied “the genius of our Constitution.”

Kagan, whose own sexual preference has been a matter of speculation, has a long track record of LGBT activism.

Social conservatives say that as Solicitor General, Elena Kagan undermined the Defense of Marriage Act (DOMA). In her “defense” of the law, she said that “this administration does not support DOMA as a matter of policy, believes that it is discriminatory, and supports its repeal.” Further, the Department of Justice did not believe in “any legitimate government interests in procreation and child-rearing.”

Both “discrimination” and determining whether the government has an interest in procreation are key issues in Obergefell.

One legal figure has walked the walk on recusal. Alabama Chief Justice Roy Moore personally abstained from voting on a ruling that instructed state probate judges not to issue marriage licenses to same-sex couples. He and his family hope the High Court's most junior justice, Kagan, will follow his lead.

The Foundation for Moral Law – which he founded and which is now run by his wife, Kayla – filed a formal recusal motion. Kayla Moore argued, “If these justices participate in this case, the Court's decision will forever be questioned as being based on their personal feelings rather than on the Constitution itself.”

The nation's most popular TV newscaster also weighed in. On his Fox News program last Tuesday, Bill O'Reilly said that “these ladies have to recuse themselves,” because “[t]he Supreme Court is supposed to be an incorruptible institution.”

Despite the law and public outcry, there is little evidence either justice will refrain from weighing in on the potential landmark case. Although urged to recuse themselves, both justices took part in the Windsor case that struck down a key provision of the Defense of Marriage Act (DOMA).