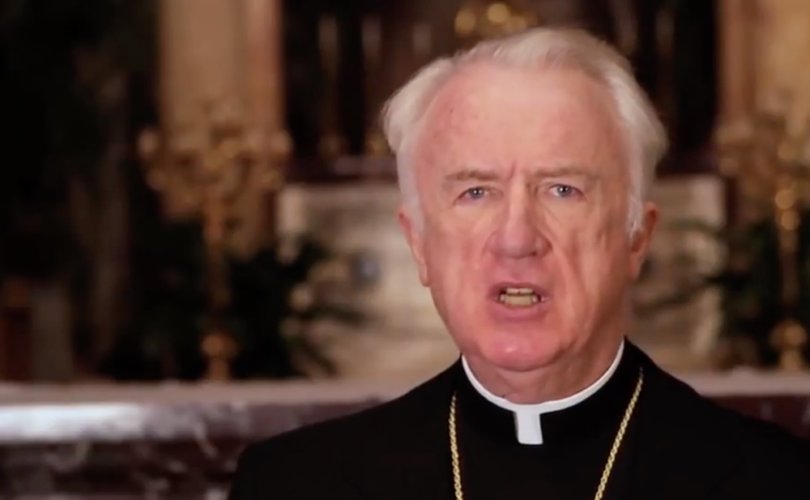 CHARLESTON, West Virginia, August 22, 2019 (LifeSiteNews) — A former seminarian who alleged in a lawsuit that disgraced former bishop Michael Bransfield sexually assaulted him five years ago while drunk has dropped the suit in a confidential out-of-court settlement.

“The Diocese can confirm that the case has been dismissed. The case was settled by agreement of the parties,” diocesan spokesman Tim Bishop told the Dominion Post.

“At the request of the plaintiff, the terms of the settlement are confidential. The Diocese will have no further comment regarding the case.”

J.E. was represented by Warner Law Offices of Charleston and had requested a trial by jury.

J.E., who was a personal altar server for Bransfield before he entered the seminary and served as Bransfield’s interim personal secretary while in the seminary, alleged in his claim that Bransfield “was a sexual predator with a lustful disposition toward adolescent males” and that Church authorities covered up his reported behavior.

J.E. further alleged that Bransfield was a binge drinker who would drink a half-bottle of the liqueur Cointreau nightly, and when intoxicated, “would engage in grossly inappropriate behavior, including … making sexually suggestive gestures, hugging, kissing, inappropriately touching and fondling seminarians.”

He also alleged that as Bransfield’s personal secretary, he traveled to Charleston with the bishop, and during that trip, Bransfield locked himself out of the rectory while drunk. According to J.E.’s claim, when he let Bransfield into the house, the bishop exposed himself, “grabbed J.E. from behind, pulled J.E. against him, running his hands down J.E.’s chest and over his genitals.” J.E. related that he broke away and locked himself in a room until daylight.

The claim relates that J.E. had a lifelong dream of being a priest but was “overcome with depression, and suffering a severe crisis of faith,” left the seminary and then the church.

Bransfield and the diocese denied all allegations, and moved in May to dismiss the suit on the grounds the alleged assault took place in 2014, long past the two-year statute of limitations, the Dominion Post reported.

The USCCB also moved to have the suit dismissed, saying the Circuit Court of Ohio County, where the lawsuit was filed in March, has no jurisdiction over it, it reported.

J.E. and his lawyers responded to both motions in May, but there were no further filings or discoveries, and then the suit was dropped.

Bransfield resigned at 75 in September 2018 amid allegations of sexual and financial misconduct, and Archbishop William Lori of Baltimore removed him from public ministry in March 2019 during a Vatican investigation into his conduct.

The investigation found allegations of sexual harassment against Bransfield “credible,” Lori said in a June letter to the diocese of Wheeling-Charleston.

It also found Bransfield had “engaged in a pattern of excessive and inappropriate spending.”

In July, Pope Francis imposed “disciplinary measures” against Bransfield that banned him from living in the Wheeling-Charleston diocese and from public ministry, and obliged him “to make personal amends for some of the harm he has caused.”

Lori’s confidential report to the Vatican on his investigation was obtained by The Washington Post in June, which reported at the time that  “a succession of younger male clerical assistants complained to church officials in West Virginia that Bransfield was sexually harassing them.”

“At least six of Bransfield’s clerical assistants in the Diocese of Wheeling-Charleston were broken by the experience,” Vicar for Clergy Anthony Cincinnati told investigators.

Moreover, “(s)imilar concerns were raised about Bransfield’s conduct in Philadelphia, where he taught at a Catholic high school, and in the District of Columbia, where he was head of the Basilica of the National Shrine of the Immaculate Conception from 1990 to 2005,” reported The Washington Post.

The investigation also revealed that Bransfield’s “lavish lifestyle” included spending millions of diocesan funds chartering private jets, drinking almost $1,000 worth of alcohol a month with members of his staff, and racking up a $182,000 flower bill because when he was in the chancery, it would receive fresh flowers costing $100 daily.

Church Militant pointed out that Archbishop Carlo Maria Viganò told Italian journalist Marco Tosatti that Bransfield is “a perfect example” of the “gay mafia” Viganò says is operating in the Catholic Church.

“It is important to note that, before being appointed bishop, he was rector of the Basilica of the National Shrine of the Immaculate Conception in Washington D.C. and was president of the Foundation Council of the Papal Foundation, both linked to (sexual predator and former cardinal Theodore) McCarrick and Cardinal (Donald) Wuerl,” Viganò said.

“In fact, his successor as rector of the Basilica, Msgr. Walter Rossi, was named there by McCarrick the same year that Bransfield was appointed bishop.”

Rossi is now under a “comprehensive investigation” by the Archdiocese of Washington and the Diocese of Scranton for allegations of homosexual predation.