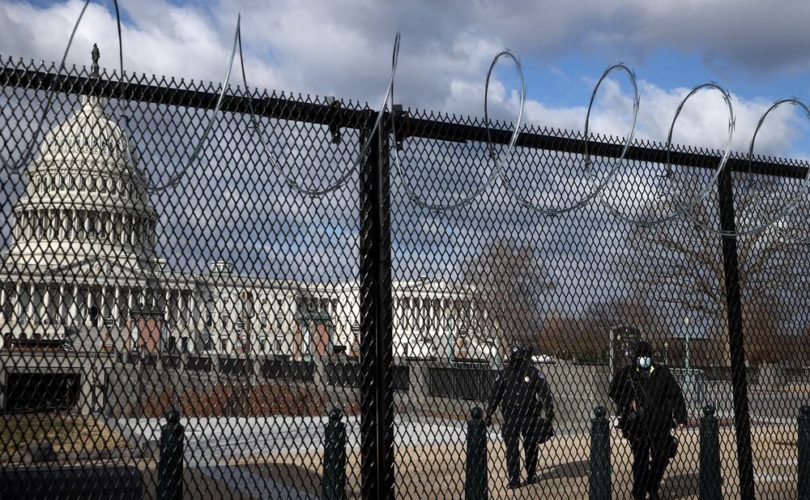 Note from LifeSiteNews President Steve Jalsevac: This issue has now also become a serious concern for Canadians. Ottawa Canada Police Chief Peter Sloly, during a Feb. 4 press conference on the trucker convoy protest in the city, indicated he is consulting with US law enforcement and intelligence agencies and the Washington Jan. 6 investigation committee about implementing a similarly dramatic over-reaction by Ottawa police to the trucker demonstrations. Many have expressed alarm over this because of the large scale, lawless abuse of power exercised by the US agencies in response to Jan. 6 and the dramatic differences between the US event and the Canadian event, in which there has been zero violence, property damage or attempted incursions into the federal legislative buildings. This story was originally published by the WND News Center

(WND News Center) – A Hollywood conservative has filed an amended federal lawsuit to obtain justice for all those who were in Washington on Jan. 6, 2021, who were not part of the number that entered the Capitol.

The complaint, seeking class action designation, was filed by Siaka Massaquoi, on behalf of those innocent people who have “been rounded up, had their homes and businesses violated and broken into, their property such as cell phones and computers seized without probably cause, arrested, prosecuted, denied bail, or some even thrown into solitary confinement.”

The description is according to a statement released by Larry Klayman, of FreedomWatchUSA.

The case was filed previously, but was rejected out of hand by a magistrate who had not even held a hearing. That was complicated by a DOJ functionary who insisted the case go back to district court. But at that point, the case was moved to small claims court to retrieve Massaquoi’s personal property confiscated by the FBI, and a judge moved it back to federal court to name the individual FBI agents, where Klayman filed an amended document.

The action by Massaquoi, an activist and entertainer, is now in federal court in the Central District of California.

The lawsuit is concerned with the “unconstitutional raid by the FBI and its agents, as ordered by and at the direction of FBI Director Christopher Wray, as part and parcel to the bureau’s post January 6, 2021, roundup of even peaceful protestors who were in Washington, D.C., in support of President Trump and a nation free from rank government corruption.”

The filing seeks to be on behalf of the many in Washington that day “who did not commit any felony crimes or engage in any violence, but who are being terrorized and chilled in the exercise of their rights, harassed, and targeted by these defendants for peacefully expressing political opinions and ideologies in order to quash all dissent…”

It continues, “While there were some people who chose to enter and engage in acts of violence in the U.S. Capitol, Plaintiff Massaquoi was not among those.” In fact, all he did was to “exercise his right to peacefully assemble and protest.”

The FBI later created a pressure campaign for even relatives to turn in people, the complaint notes.

It explains that the FBI never sought an interview with Massaquoi, but instead broke into his home last summer, handcuffed adults and took them outside not fully dressed.

The FBI then “cleared” the house, and took multiple items. They declined to present a warrant.

The case charges that the raid on the entertainer’s home was unconstitutional, but still was ordered by the FBI, its agents, and Wray. The case also alleges violations of First, Fifth, and Fourteenth Amendment constitutional rights by the defendants.

Klayman, at the time the case developed, explained, “The FBI, as alleged, is being used by the Biden-Harris Justice Department as the administration’s and the left’s ‘personal Gestapo,’ to stifle free speech and dissent over the near total leftist, socialist and borderline communist takeover of our body politic.”

He continued, “And, FBI Director Wray bears personal legal responsibility and liability for these unconstitutional acts, which he has bragged about in public testimony before Congress — branding the peaceful protestors as mostly white domestic terrorists — in order to save his job with President Biden after he was blamed for not being prepared for and warning Congress and the incoming Biden administration over the so called ‘capitol riot’.”

The Los Angeles Times documented that some 20 agents, armed and outfitted in tactical gear, raided the North Hollywood home were Massaquoi was living, after the events in Washington.

Massaquoi posted on social media afterward his affirmation that he did nothing wrong on that day.

The report claimed videos on social media showed Massaquoi was inside the Capitol.

“In the Instagram video, Massaquoi, filming with an unidentified friend, says ‘a lot of us are passionate,’ speaking of those who support former President Trump. He advised watchers to remove their children from public schools, but ‘If you want to keep them in there, run for school board so you can control what happens.’ Since Jan. 6, many Trump supporters have turned their energy to local political races,” the LA Times report said.