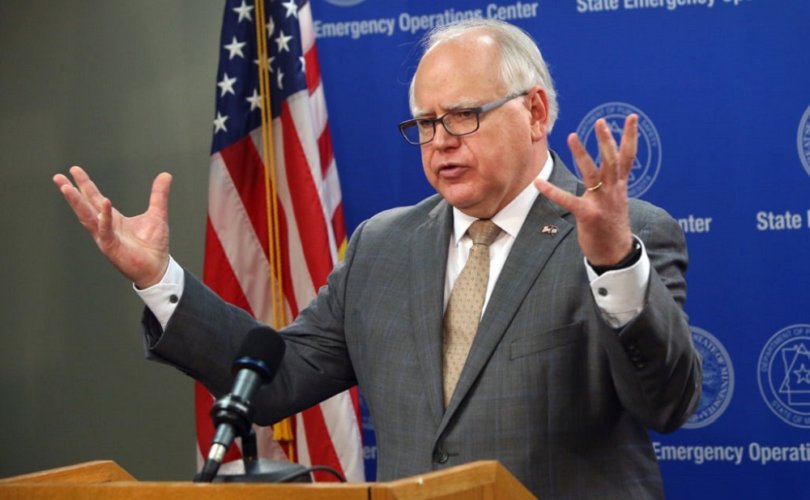 “Governor Walz, a former teacher, gets a F in religious liberties,” declared Thomas More Society Special Counsel Erick Kaardal. “Other states, including Texas, Illinois, and Ohio have excluded churches from COVID-19 mask mandates. Unlike Walz, those states have recognized that you cannot criminalize religious attendance at houses of worship for any reason. Governor Walz wants to prosecute Minnesotans for religious attendance. We are going to do our best not to see that happen.”

Kaardal also observed that other state leaders who have persisted in this type of religious discrimination have been slapped down by federal courts, as in the case of New York’s Governor Cuomo.

“Minnesota’s governor is wreaking havoc on the religious freedoms of the faithful. Christians of all denominations, Muslims, and Orthodox Jews are bound by their faith to worship together. Time-honored rites and rituals, including prayers, singing, communion, and a laying of hands in blessing, are among those elements that comprise the free exercise of religion, for which the First Amendment disallows the prohibition thereof,” explained Kaardal. “That is the central tenet of the complaint. It is only compounded by Walz’s expressly imposed no-exception, six-foot social distancing requirements on religious ceremonies in churches and Minnesota’s conflicting laws that concurrently criminalize wearing a mask as well as not wearing a mask.”

The complaint asks the court to declare Minnesota’s combination of executive orders regarding social distancing and mask wearing at church to be unconstitutional under the First and Fourteenth Amendments of the United States Constitution.

Kaardal added, “We are also seeking a pronouncement that Walz’s Executive Orders violate the Minnesota Constitution’s Article III separation of powers provision. Walz is exercising pure legislative law-making power — a thing only the legislature can constitutionally do. In particular, we seek an injunction against Executive Order 20-74, which mandates social distancing during religious worship, and Executive Order 20-81, which requires face masks and conflicts with existing Minnesota laws outlawing the wearing of face masks.”