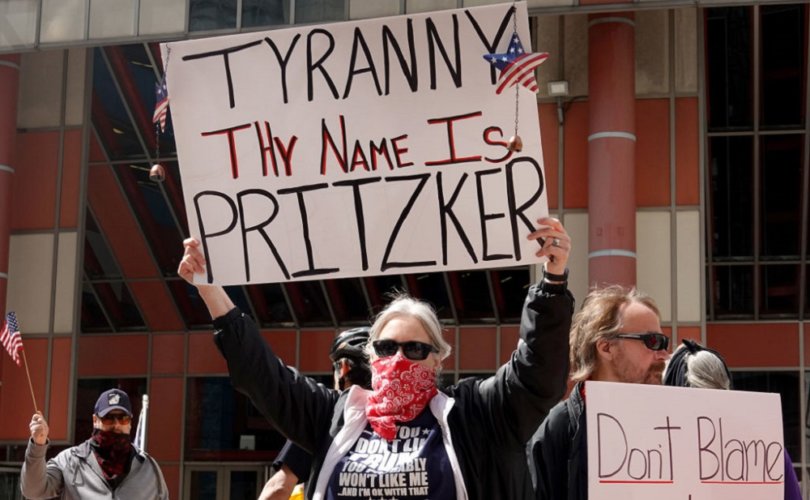 ILLINOIS, May 29, 2020  (LifeSiteNews) — Churches in Illinois have successfully fought back against a mandatory stay-at-home order limiting congregation sizes to no more than 10 people after multiple lawsuits prompted the governor to replace the order with a set of non-mandatory guidelines.

Numerous churches in the state had filed lawsuits against Governor J.B. Pritzker’s stay-at-home orders limiting the size of participants at church services.

Before that deadline, Pritzker issued the new non-mandatory guidelines for places of worship. The guidelines continue to recommend social distancing, face masks, and limiting capacity, as well as excluding singing, refreshments, and close physical contact, but church leaders are free to implement them as they see fit.

Thomas More Society vice president and senior counsel Peter Breen said the news “marks the end of a shameful chapter of discrimination by the government of the Land of Lincoln against houses of worship and religious leaders.”

Liberty Counsel, the Christian non-profit organization that represented the Elim Romanian Pentecostal Church and Logos Baptist Ministries, described the outcome “a complete victory in the near term” but stressed that restriction on churches must be ruled as unconstitutional to prevent similar situations in the future.

“Unless and until there is a judicial declaration that Governor Pritzker has acted unconstitutionally thus far, there is nothing keeping him from changing his mind again, whether in this crisis or any future crisis,” the organization said in a press release.

Liberty Counsel said the churches had been prompted to issue their appeal to the Supreme Court after the Chicago Department of Public Health threatened to close them down for holding services with more than 10 people.

“Governor Pritzker has shown himself quite willing to overrule the Constitution by fiat. In doing so, he has caused incalculable damage to the Romanian churches Liberty Counsel represents and all the houses of worship in the state.”

Liberty Counsel said it would be filing a reply to the Supreme Court, as at present there is nothing to stop Pritzker from imposing restrictions on churches again.

“He knew he did not have authority to trample on the First Amendment rights of churches and houses of worship, but he did anyway and continued to do so until his case reached the U.S. Supreme Court,” he continued.

“He cannot be trusted to obey the Constitution. The fact that he recently said that churches would never get above 50 people for at least 12 to 18 months, and now a few hours before he had to file with the Supreme Court he removes all restrictions, illustrates that he had no basis for the orders in the first place. The only thing that changed was he was dragged to the steps of the U.S. Supreme Court.

“While we are happy that all churches and houses of worship no longer have any restrictions, we want to make sure this tyranny and abuse never happens again.”