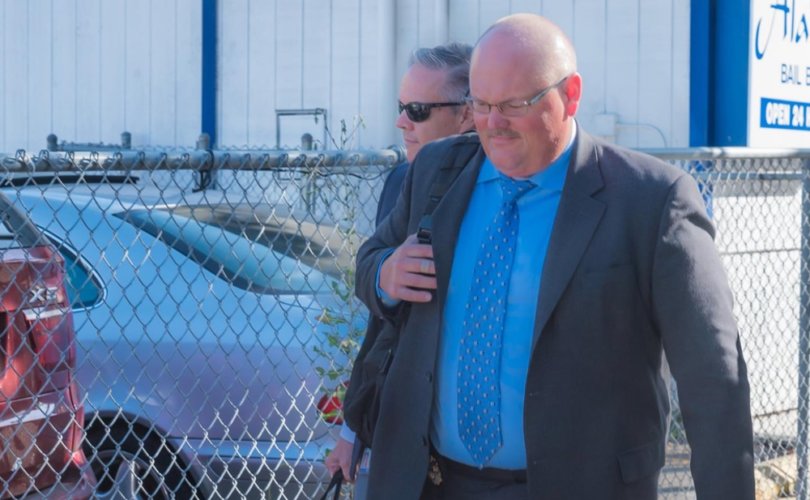 SAN FRANCISCO, California, September 13, 2019 (LifeSiteNews) — Despite the judge nixing a video in which a former StemExpress technician describes seeing a beating heart in a full-term aborted baby, the sixth day of David Daleiden and Sandra Merritt’s criminal preliminary hearing was a great day in court, their lawyers say.

It was the second time on the witness stand for Brian Cardwell, the California Department of Justice special agent whose investigation of the Center for Medical Progress (CMP) undercover journalists led to their being charged with 15 felony counts of illegal taping of confidential information in connection with the videos they released exposing Planned Parenthood trafficking in baby body parts.

“It was a great day for the defense,” said Horatio Mihet of Liberty Counsel, who along with California attorney Nic Cocis is representing Merritt.

“Agent Cardwell took the stand and on cross-examination, we were finally able to expose this case for the sham that it is, and the frivolous case that it is.”

The defense lawyers are arguing that Section 632 is clear that communications that can reasonably be expected to be overheard are not confidential, and that Section 633.5 permits covert taping of confidential information if those doing so have a reasonable belief they are investigating violent crimes.

Cardwell testified on Tuesday he identified 17 possible victims among the 2,300 video files he viewed after culling out duplicates in the 50,000 files he found on the laptops, external hard drives, and thumb-drives seized from Daleiden’s apartment in April 2016, and “started cold calling.”

Of the 14 Does – who can’t be named under the judge’s order – now accusing Daleiden and Merritt of illegally taping them, three are from Los Angeles, two are from El Dorado County, and eight are from the 2014 National Abortion Federation convention that took place in San Francisco.

Cardwell stated in his affidavit for Daleiden’s arrest warrant he realized an agent had a duty to investigate for a 633.5 defence, Brentford Ferreira, lawyer for Daleiden, told the court.

Ferreira asked to play a CMP video of Holly O’Donnell, which Cardwell said he had viewed.

O’Donnell was briefly on contract with StemExpress and went to Daleiden to tell him of her horrifying experiences at the tissue procurement company, including seeing a heart beating in a nearly intact late-term aborted baby.

But Judge Christopher Hite nixed playing the video on the grounds that O’Donnell, who was a phlebotomist, lacked the expertise to tell whether the baby was alive or dead.

“I’m not putting it on for expertise,” Ferreira said. “She says in the video the person she was working with tapped the heart and it started beating and she saw it with her own eyes.”

Cardwell “is supposed to be investigating the whole case. He says he saw a Holly O’Donnell video where she talks about a whole fetus with a beating heart,” Ferreira said.

Hite said he agrees the defense can put in evidence regarding what Daleiden had a reasonable belief he was investigating, but “you can’t do it through this witness.”

Ferreira also pointed out that Doe 9 went to the Los Angeles Police Department to file a complaint under 632 after CMP published a video in July 2015 of her discussing how to crush a baby in utero to harvest intact organs.

The LAPD did not lay charges because the meeting took place in a restaurant.

Ferreira asked Cardwell if that decision struck him “as strange” but the question was ruled irrelevant.

Mihet questioned Cardwell on Planned Parenthood’s role in the investigation.

Cardwell testified he spoke on the phone to Beth Parker, chief legal counsel for Planned Parenthood in California, but that she “didn’t tell me to look for anything” when he and 11 agents raided Daleiden’s apartment, nor did he recall Parker “having any input on the warrant.”

But referencing a report, Cardwell testified that his DOJ colleagues interviewed Parker, during which time she “broke down” and said “Planned Parenthood would like the computers used to produce the videos.”

“Cardwell testified that he interviewed all these supposed Doe victims and they told him that they thought these communications with David Daleiden and Sandra Merritt were confidential, and he said that he did nothing to probe those assertions, he made no efforts to determine whether the Doe witnesses were being truthful,” Mihet told LifeSiteNews.

“He also admitted that in the affidavit that he signed with the court when they were issuing the arrest warrants for Sandra and for David that he simply took what the Doe victims told him, including the information he admitted was incorrect,” said Mihet.

As noted in a Center for Medical Progress tweet:

When presenting evidence to judge for Daleiden, Merritt arrest warrant, Agent Cardwell did not mention Doe's 5 statement that she could be overheard, the public setting in which Doe 4 was recorded (elevator and hotel lobby) and how these hold up against CA Penal Code 632.

The day also included “one of the most remarkable cross-examination moments of my career” that left him “flabbergasted along with the rest of the courtroom,” Mihet added.

During Mihet's questioning of Cardwell that established the agent “made no effort to determine whether or not the Doe victims” had an understanding of confidential communications that matched the law, deputy Attorney General Johnette Jauron objected by stating “there is no definition of confidential communication” in Section 632, at which point the defense counsels burst out laughing and Hite shot them a reproachful look.

“We have the prosecution that is prosecuting Sandra and David asserting that they don’t know that there’s a statutory definition for a confidential communication. That just boggles my mind,” said Mihet.

“So those were bombshells in the courtroom today. We exposed this prosecution, the sham investigation, and I don’t see how after today this case can continue,” he said.

“The only just result is dismissal of these charges. Whether that will happen, it remains to be seen.”

Daleiden is expected to testify at the preliminary hearing Friday.