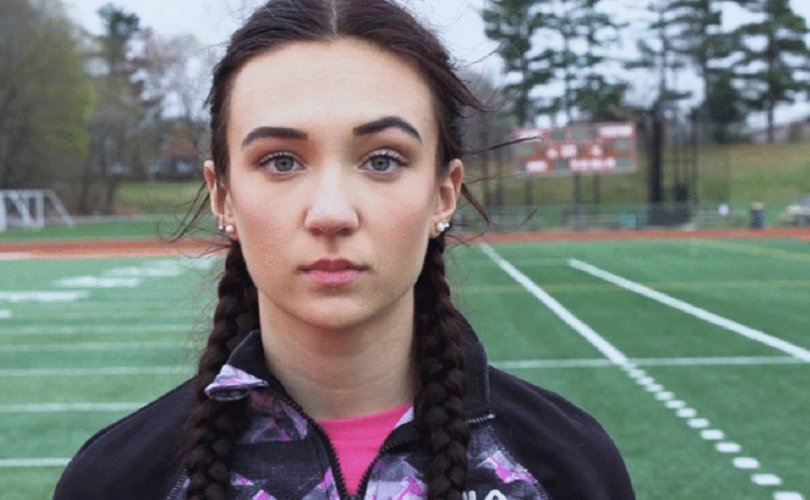 May 11, 2020 (LifeSiteNews) – Attorneys representing a trio of Connecticut high-school girls athletes are calling for the replacement of the judge overseeing the case after he tipped his hand by forbidding them from referring to biologically-male athletes as “male.”

The Connecticut Interscholastic Athletic Conference’s (CIAC’s) official handbook says the conference “shall defer to the determination of the student and his or her local school regarding gender identification,” without any conditions pertaining to physical transitions or testosterone levels, on the grounds that it “would be fundamentally unjust” to “preclude a student from participation on a gender specific sports team that is consistent with the public gender identity of that student for all other purposes.”

Thanks to the CIAC policy, biologically male competitors have consistently outperformed actual females, according to a complaint filed by Alliance Defending Freedom (ADF) on behalf of runners Selina Soule, Alana Smith, and Chelsea Mitchell. This in turn deprives girls not only of opportunities to advance in competition but of recognition that impacts their academic future via lost college recruitment consideration and scholarship opportunities.

Chatigny claimed the terminology “transgender females” was “consistent with science, common practice and perhaps human decency” without conceding any of ADF’s “legitimate interest or position,” and that “males” was “needlessly provocative.”

“The entire focus of the case is the fact that the CIAC policy allows individuals who are physiologically, genetically male to compete in girls’ athletics,” lead ADF attorney Roger Brooks responded, noting that ADF was already “happy to use their preferred names,” but the fact remained that the “point of this case is physiology of bodies driven by chromosomes and the documented athletic advantage that comes from a male body, male hormones, and male puberty in particular.”

“So if you feel strongly that you and your clients have a right to refer to these individuals as ‘males’ and that you therefore do not want to comply with my order, then that’s unfortunate,” Chatigny replied. “But I’ll give you some time to think about it and you can let me know if it’s a problem. If it is, gosh, maybe we’ll need to do something. I don’t want to bully you, but at the same time, I don’t want you to be bullying anybody else. Maybe you might need to take an application to the Court of Appeals. I don’t know. But I certainly don’t want to put civility at risk in this case.”

On Saturday, ADF filed a motion requesting that Chatigny recuse himself from the case.

“A disinterested observer would reasonably believe that the Court’s order and comments have destroyed the appearance of impartiality in this proceeding. That requires recusal,” the motion argues. “To be sure, the public debate over gender identity and sports is a heated and emotional one. This only increases the urgency that court preserve their role as the singular place in society where all can be heard and present facts before an impartial tribunal.”

Outrageous that judge would insist that attorneys for plaintiffs challenging males in girls' races refer to the males as females.

Rather like a judge in an abortion case insisting that those defending an abortion restriction refer to the unborn human being as a blob of tissue. https://t.co/czzHuA3v82

Males who identify as women do not become females, despite what this judge and “science” may say. But the power to define reality is real, and the judge is trying to exercise it. The lawyers at @AllianceDefends are right to exercise it as well https://t.co/HMghPzSaGL

LGBT activist groups such as the National Center for Transgender Equality (NCTE) have assailed the suit as a “desperate attempt” to “strip transgender students of the rights every student deserves and policies that provide them the same opportunities as every other student.” But science backs up the plaintiffs’ concerns.

Last June, the Journal of Medical Ethics published a paper by researchers in New Zealand finding that “healthy young men (do) not lose significant muscle mass (or power) when their circulating testosterone levels were reduced to (below International Olympic Committee guidelines) for 20 weeks,” and “indirect effects of testosterone” on factors such as bone structure, lung volume, and heart size “will not be altered by hormone therapy”; therefore “the advantage to transwomen (men) afforded by the (International Olympic Committee) guidelines is an intolerable unfairness.”

LifeSiteNews is currently running a petition in support of ADF’s complaint, which has so far collected more than 186,000 signatures.