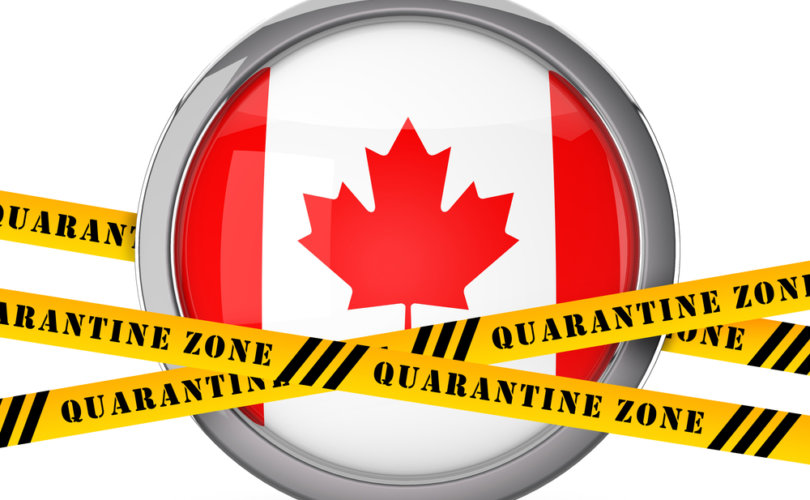 CALGARY, Alberta, February 4, 2021 (LifeSiteNews) — Calgary lawyers have threatened to sue the federal government over recent arrests and detainment of law-abiding Canadian citizens and their transport to federal isolation facilities. The lawyers argue that the latest anti-COVID measures are “flagrant violations” of Canadians’ constitutional rights and freedoms, and reflect a government that is increasingly “aggressive” and totalitarian.

Several Canadians have described how unidentified police and public health officials arrested citizens entering their country, including some who had negative COVID blood test results, and forced them into white vans to transport them to undisclosed quarantine facilities. They said officers refused to identify themselves or answer questions about where and how long they or their loved ones would be detained.

“You are hereby on notice that if you do not immediately rescind these provisions, and release the Canadians you are holding illegally under arrest in federally designated containment facilities, we will imminently commence legal proceedings,” said a letter from Calgary-based Justice Centre for Constitutional Freedoms (JCCF) president John Carpay to Federal Minister of Transport Omar Alghabra.

“Your government has increasingly shown a disturbing and even aggressive opposition to the constitutional rights and freedoms of Canadians,” Carpay wrote.

“This is not China or Cuba, or Chile under Pinochet, or Spain under Franco, or theocratic Iran. We are not prepared to permit you and your government to turn Canada into a repressive replica of countries that have no respect for human rights and civil liberties.”

Late Saturday evening, a tearful mother from Red Deer, Alberta, posted a video of herself at the Calgary International Airport describing how when she went to collect her 20-year-old son, Ethan McDonald, who was flying home from Arizona, authorities prevented her from talking to him.

MacDonald found out after her son was released on Monday that he had been taken to a Westin hotel near the airport and was told not to leave the room. A guard was positioned in the hallway and food was left outside his door.

Prime Minister Justin Trudeau announced Friday that all citizens returning to Canada would be subject to new travel restrictions that would see them taken to an isolation facility and tested, and that they would be able to leave if they produced a negative test. If they test positive, they are to be transported to another undisclosed isolation facility to complete a 14-day quarantine. Trudeau said the government would bill travelers about $2,000 each to cover testing, accommodations, and food.

MacDonald had purchased a COVID test for her son before he left Arizona. Even though he had tested negative, border officials said the antigen blood test was not accepted and that he would have to be re-tested at a quarantine facility. Then, they whisked him away. Ethan had actually received both an antigen test and a PCR test before returning to Canada, but his negative PCR test result was emailed to him just hours after he arrived in the quarantine facility, which was a hotel room at the Westin near the airport.

“So he now had two negative tests sitting there and no way to tell them,” his mother said in a video she posted on Wednesday. “He had to wait it out for their third test they had done in there and then be released when they saw fit.”

MacDonald criticized the lack of transparency, the secrecy of the officials who approached her, and their unwillingness to help. “There was zero accountability,” MacDonald said. “The problem is when you have a one-sided system like what the federal government has done here, that has no checks and balances, nobody you can call for help, nobody to ask questions to … you go in there under the premise that you’re going to be taken care of and safe, but there’s nobody watching out for that.”

“Given a system like this where there is nothing, and say you do test positive, then you’re sent somewhere else for two weeks with even less accountability.”

MacDonald told the Western Standard newspaper that she was told to expect a bill for $2,000 for Ethan’s isolation but that she will refuse to pay it.

A similar incident occurred on Thursday, apparently one day before Trudeau had even implemented his new measures, when Edmonton Pastor Nikki Mathis was arrested on her return from the United States and similarly whisked away in a white van to a nearby hotel while a police officer and a health agency officer refused to disclose to her husband where she was being taken.

The Canadian Charter of Rights and Freedoms enshrines the protection and guarantee of individual rights and freedoms, such as the rights to liberty, mobility, and privacy, to all Canadians. All government orders, including emergency orders, must comply with the Charter and not infringe Canadians’ rights unless doing so can be demonstrably justified.

“It is necessary to have rigorous protections against oppression from the state precisely because the state is so inclined to abuse its authority,” stated Jay Cameron, Litigation Director for the JCCF in an e-mail to LifeSiteNews. “That’s why there is a right to not be arbitrarily detained or arrested, the right to remain silent, the right to counsel, the right to appear before a judge, the right to be released unless the Crown can show cause on an individual basis why someone ought to be detained.”

“None of those checks and balances exist in the health context,” Cameron said.

He noted the totalitarian nature of recent Trudeau administration decisions. “When was the last time you heard Parliament involved in any of these decisions?” he asked.” All of these actions are the result of unilateral action by the Prime Minister’s cabinet, without the democratic input of Parliament or the public.”

“This isn’t about controlling a virus. It’s about controlling Canadians,” Conservative MP Derek Sloan (Hastings—Lennox and Addington) tweeted, sharing an article about the MacDonald’s ordeal. “You must test positive for obedience and submission.”

“It’s very troubling,” Sloan, a lawyer who was recently canceled from the Conservative Party Caucus for his political questioning of government COVID measures told LifeSiteNews.

“I don’t know why the media isn’t more concerned,” Sloan said. The CBC and other mainstream media have not covered the stories of the detentions in Alberta.

The Conservative Party should be “pounding on the table about this too,” Sloan added. The official critics have offered only bland protest, however, which included a question from Michelle Rempel (Calgary Nosehill) who asked the Liberals if people who have been vaccinated will be able to evade the new travel restrictions. They will not, Federal Transport Minister Alghabra replied. “We still don’t have information on the effect of these vaccines on transmissibility, therefore all Canadians will be subjected to these measures,” Alghabra said.

Opposition Leader Erin O’Toole did not respond to a request for comment on the rapid erosion of Canadian’s freedoms by the reigning Liberal administration before publication Thursday.

Sloan added that he is concerned about the lack of information about who is actually conducting arrests. “When you get into the details of these stories where people are asking basic questions — What’s your name? Who do you work for? — There’s no response. Who are these officers arresting people? Are they police or are they some kind of health corps?”

“What we are doing is providing hotel rooms for people — at their choice — to self-isolate, should they not be able to do so at home to avoid infecting loved ones,” he said.

Sloan said that is clearly not the case now, adding, “People need to ask their premier what’s going on.”

Premier Kenney did not respond to a request for comment from LifeSiteNews on Wednesday.

Steve Buick, the press secretary for Alberta’s Ministry of Health said the arresting officers in the cases at the Calgary International Airport were not provincial officers and that Alberta was not going to do anything about the restriction of constitutional rights on the province’s citizens.

“We don’t have jurisdiction. We can’t tell the federal government what to do,” Buick told LifeSiteNews.

Cases of travel arrests and detainment of law-abiding Canadians are being reported across the country. Steve Duesing was given the choice of a hotel or prison when he landed at Toronto’s Pearson International Airport. CTV News reported that he was taken to a plastic-covered Radisson Hotel near the airport and kept isolated in a room on the ninth floor where he was provided meals that resemble cheap airplane fare and he was not allowed to order food from restaurants.

“This doesn’t seem legal in a free country. It also seems punitive. If he had a fever or cough, perhaps precautionary measures of some kind could be taken,” Duesing said. “But taking away someone’s liberty is obscene. It feels like a violation of basic human rights in a country that purports to champion such freedoms.”