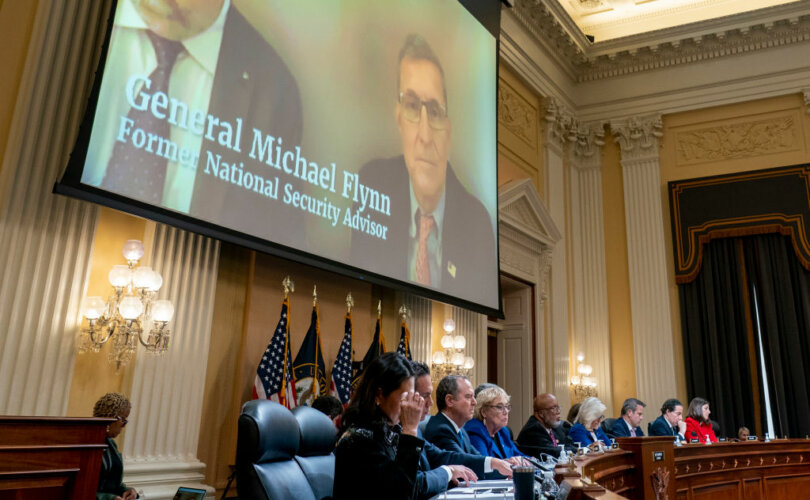 A hearing of the U.S. House select committee investigating the January 6 attack on the U.S. Capitol in the Cannon House Office Building on October 13, 2022, in Washington, D.C.Photo by Andrew Harnik-Pool/Getty Images

(The Epoch Times) – As the House January 6 committee heads towards its final public hearing, lawyers are criticizing the panel for engaging in overreach and harassing targets through onerous document production requests.

The comments were made as the committee is currently locked in a battle with former President Donald Trump’s election attorney John Eastman on the production of 576 emails subpoenaed by the panel. The committee, in an October 3 filing before a federal district court, argued that Eastman was improperly holding back documents, under the guise of attorney-client privilege and attorney work-product privilege.

Eastman, 62, helped prepare legal filings for Trump that contested the results of the 2020 presidential election in several states. The committee has contended, in part, that the filings were an attempt to overthrow the government.

Eastman’s attorneys, in response, accused the committee of attempting to undermine the attorney-client relationship.

His lawyers further said that the court has already ruled on the matter and found in the vast majority of cases for Eastman’s claim that attorney-client privilege prevented Eastman from disclosing the documents to the committee.

As proof of Eastman’s alleged attempts to improperly shield documents from investigators, the January 6 committee released an email between Trump’s election lawyers in which they joked about Trump.

One of the email’s authors, former Trump lawyer Bruce Marks, accused the committee of releasing the exchange in an attempt to embarrass Trump’s lawyers.

“At the time of the emails on December 30 and 31, 2020, Professor Eastman, Ken Chesebro, and I were representing President Trump in litigating a U.S. Supreme Court petition filed on December 23,” Marks told Politico. “These emails were part of a privileged exchange. Regardless of whether specific tongue-in-cheek emails were protected by the attorney-client privilege, they were clearly protected by First Amendment rights of political association and free speech.”

One lawyer who has defended a half-a-dozen people who have been charged as a result of actions at the Capitol on January 6 applauded Eastman and his attorneys for pushing back.

“The Committee’s endless speculation does not trump the power of attorney-client privilege,” attorney Joseph McBride told The Epoch Times in an email. McBride has a reputation for fiercely criticizing the government for its detention and prosecution of people regarding the events of January 6.

“More people need to stand up to these communist psychopaths. I, for one, am glad that John Eastman is doing it,” he added.

Another lawyer who is suing the government over the seizure of phone records cautioned that the dispute between Eastman and the committee was only a small part of the panel’s excesses.

“I think [Eastman’s lawyers] were basically trying to show the court that that was a claim of attorney-client privilege that applied to that email. But the larger issues in the Jan. 6 Committee is they are overreaching,” Paul Kamenar, an attorney with the National Legal and Policy Center (NLPC), a conservative watchdog group, told The Epoch Times.

The NLPC is suing the select committee over phone records of a January 6 protest organizer that the panel demanded in their probe.

“They’re not respecting that attorney-client privilege and work-product privilege. And even so, some of this is First Amendment protected communications that we have,” Kamenar said.

To Kamenar, the committee has exceeded its authority.

“I think at this point, it’s just a matter of a fishing expedition and harassment, as I see it, and there’s no more need for any other emails from other people,” he said about the continued investigation of the panel, adding that there are no new facts being discovered by the committee.

McBride said that the continuation of the committee is just being used to hurt so-called MAGA-Republicans, without really investigating what happened.

“The committee is, without question, suppressing exculpatory evidence. It is also selectively editing videos to proffer a narrative to the public that caricatures all MAGA Republicans in the light of domestic extremism,” McBride said, noting that the same members of Congress gave Hillary Clinton a pass when she “destroyed 33,000 emails” she improperly kept on a private email server when she was secretary of state.

According to Kamenar, the dispute over privilege claims is obscuring an obvious purpose of the January 6 Committee hearings, which is to make it toxic to oppose proposed legislative reforms that would make it harder to decertify presidential results.

“That’s the purpose of the committee: Rep. Liz Cheney has a bill that would reform the Electoral Count Act, which is also co-sponsored by Rep. Zoe Lofgren,” said Kamenar.

In September, the House passed the Presidential Electoral Reform Act, introduced by January 6 Committee members Cheney (R–WY) and Lofgren (D–CA), that makes a number of changes to the 1887 Electoral Count Act. These include making the vice president’s role in election certification a ceremonial one, and increasing the number of lawmakers needed to sustain an objection to a state’s reported electoral slate.

A matter of politics

Kamenar believes that the committee previously postponed hearings because of Hurricane Ian not out of sympathy for the victims but because the networks were busy covering the hurricane and wouldn’t give the hearings top billing.

“They want to make sure they’re in primetime and get maximum TV coverage. So it’s clear that it’s a matter of politics there. And also, the Committee is trying to be assistant prosecutor to the Justice Department for the criminal investigation” into January 6, Kamenar said.

Meanwhile, McBride contended that the committee’s rush-to-judgment of the selective release of information wouldn’t stand up in a real court of law.

“The January 6 Committee is no different from a counsel of 17th-century puritans looking to burn witches in Salem,” McBride said.

“The Committee is not looking for the truth: instead, it seeks to identify, prosecute, and burn at the stake anyone who dares to question the Biden regime’s action,” he added.

The Epoch Times reached out to the January 6 committee for comment.