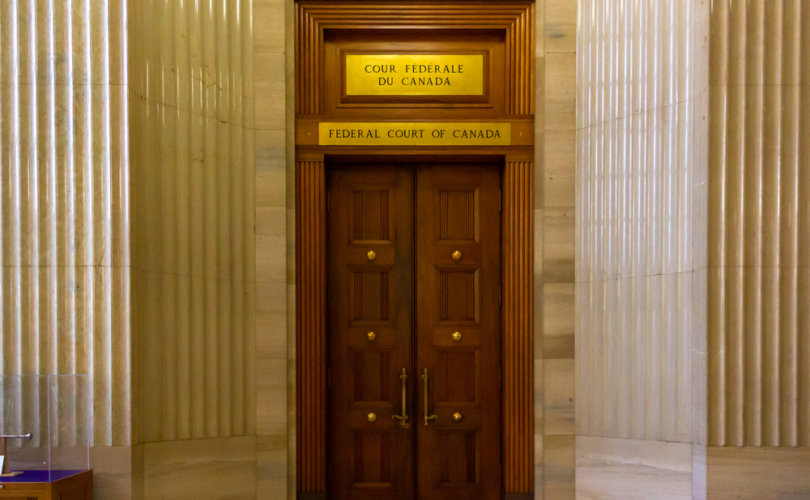 OTTAWA (LifeSiteNews) – A legal team representing 201 Canadian federal employees from the Treasury Board was in court Monday to battle a federal government order that says all employees must reveal their COVID jab status or face potential job loss.

According to Blacklock’s Reporter, the 201 Treasury Board workers were unsuccessful in obtaining an injunction to stop their employer’s jab disclosure policy. An injunction will not happen until a constitutional court ruling is made by a federal judge.

In federal court Monday, Justice Simon Fothergill wrote that the group of the un-jabbed “refuse to be vaccinated for reasons that vary.”

Fothergill wrote that the un-jabbed say their rights are “at common law and pursuant to the  Charter Of Rights And Freedoms are infringed by the vaccination policy in a manner that cannot be justified.”

“The vaccination policy does not permit mandatory testing as an alternative to those who simply do not wish to be vaccinated or who do not consent to disclosing their vaccination status to their employers,” added Fothergill, according to Blacklock’s Reporter.

Neither Fothergill nor any other federal judge has yet to make a final ruling on federal worker jab mandates or whether or not they are constitutional, says Blacklock’s Reporter.

The Treasury Board is following a November 15 jab disclosure deadline set by the federal government. All 280,000 employees had to show that they had two COVID jabs or a medical or religious exemption. Otherwise, they were to go on unpaid leave by this date.

Around 98 percent of the Treasury Board workers had the COVID jabs, with 4,662 workers stating they would not take the jab or reveal their medical status, says Blacklock’s Reporter.

The Treasury Board had a deadline of the end of October for all employees to disclose their jab status.

In October, Treasury Board Chair Mona Fortier, who is MP for Ottawa-Vanier, said that it is her top priority to see all of her employees vaccinated.

“I truly believe that mandatory vaccination is the approach that needs to be done,” Fortier said.

According to the Treasury Board of Canada Secretariat, under its new policy, “federal public servants in the Core Public Administration (CPA), including members and reservists of the Royal Canadian Mounted Police (RCMP), must be vaccinated against COVID-19.”

“The requirement for employees to be vaccinated applies whether they are teleworking, working remotely, or on-site. Contracted personnel who require access to federal government worksites will also need to be vaccinated,” the Treasury Board of Canada Secretariat says.

From November 15, says the Canadian government, all public servants “who refuse to disclose their status or who are unwilling to be fully vaccinated will be placed on administrative leave without pay.”

“Employees who are unable to be vaccinated based on a prohibited ground as defined under the Canadian Human Rights Act, such as a medical contraindication, may request accommodation,” says the government.

Some Canadian unions have come out against mandatory COVID jab policies, such as the Public Service Alliance of Canada and the Toronto Police Association.

Canada’s Armed Forces (CAF) has also mandated the COVID-19 jabs for all members. Those in the CAF who refuse the jabs could face potential “career ramifications.”

A group made up of jabbed and un-jabbed firefighters, cops, transit workers, and other civic workers threatened to take legal action against the City of Edmonton and its officials unless it rescinds a mandatory COVID vaccination policy.

Ravi Jadusingh, the group’s lawyer, wrote in his legal warning letter to Edmonton officials that stigmatizing “the unvaccinated” amounts to “hate speech.”

A study in the journal Science published in November reported that the reported efficacy of three COVID jabs approved for use in Canada — Pfizer, Moderna, and Janssen — has waned significantly since earlier in the year, going from 86 percent to 43 percent.