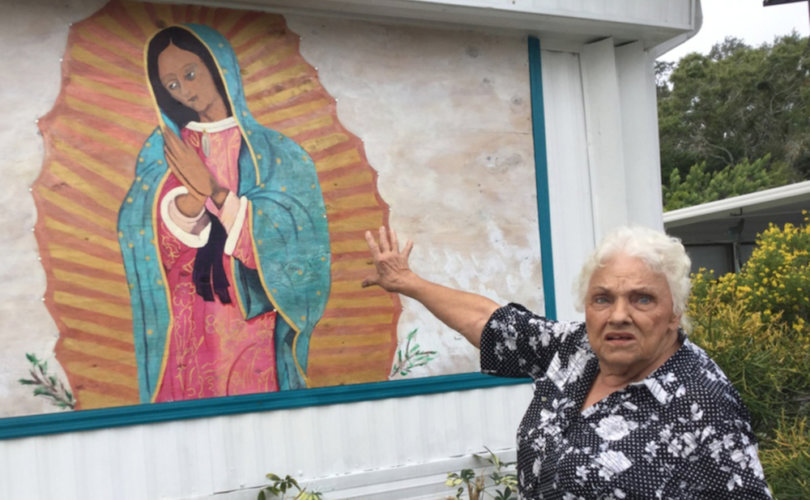 BRADENTON, Florida, December 6, 2018 (LifeSiteNews) — A mobile home park is threatening legal action against an 85-year-old Florida woman over an image of the Blessed Mother on the front of her home.

Lawyers for Bradenton Tropical Palms sent Millie Francis a notice on November 9 that she had 30 days to remove a painting of Our Lady of Guadalupe or face legal action, the Bradenton Herald reported.

“They’ll have to kill me first,” Francis had said days before receiving the notice regarding the specter of park management forcing her to remove the image.

With the deadline nearing, she told the Herald on Tuesday, “It’s not going anywhere.”

The painting of Our Lady is located on a piece of plywood where Francis’ front window once was.

She requested and received permission in April to have the window removed because the park’s security staff would shine their flashlights into it at night. She also had a neighbor who would look into the window.

Francis, a devout Catholic, painted the image recently in hopes of encouraging anyone who saw it to pray.

“We’re losing faith in Our Lady and Our Lord,” Francis said. “Big time. And I’m hoping to bring all this back. I hope it works.”

However, Janet Nowakowski, the property manager for Vanguard Property Management of Tampa, said that while Francis had permission to remove the window, she did not get permission for the painting.

Francis had until October 31 to complete the window replacement, Nowakowski said, and because she did not, Francis must resubmit the project for approval or remove the painting.

Not only did she complete the project on time, Francis said, but there is nothing in the Bradenton Tropical Palms rules about decorating after the fact.

Francis believes the pushback is not about the window replacement but her decision to paint the Blessed Mother, and that she is the target of discrimination.

Other neighbors have secular figures in their yards, she noted.

“There’s all kinds of stuff out there, but this is because I’m Catholic and it’s wrong,” Francis said. “With all the things going on in the world, I would think there would be more important things to worry about than this.”

Nowakowski has said she doesn’t have any issue with the content of the painting.

“Numerous” people have complained about the painting for various reasons, Nowakowski said.

Francis said there are many people who come knocking on her door “that absolutely thought it was beautiful.”

Francis had contacted legal aid for help, not knowing her rights in the matter, but was told they couldn’t help.

The fact the park is determined to take the painting down is causing her stress, and Francis is in the process of reaching out to the Knights of Columbus at the suggestion of her priest at Sacred Heart Catholic Church, who has blessed the painting.

“If I have to go to court, then I have to go,” she said. “I don’t know what to do. I can’t take this anymore, but I can’t see it coming down. It’s not hurting anyone. They don’t have to look at it if they don’t like it, so I don’t understand why they are against me, but it’s going to stay.”

Since publishing the story in early November, the Bradenton Herald heard from several readers via email questioning why anybody would trouble an elderly woman regarding her religious beliefs.

One reader wrote a letter to the editor on the issue.

Tropical Palms resident Jackie Freeman said the park is setting a dangerous precedent considering a number of residents have various religious or mythical figures in their yards, such as angels and fairies.

The park’s lack of specific restrictions and taking legal action against Francis would effectively create a “religious-free environment,” Freeman said, prohibiting everything up to and including a sign reading “Smile, God loves you.”

“Without covenant restrictions against the display of religious symbols,” Freeman wrote, “an owner should be permitted to freely erect a religious display on their living unit.”

Francis didn’t know what she wanted to do in the window space at first, she said, but felt called one day at Mass to honor the Virgin of Guadalupe.

“I was at church during Mass just before Communion,” she said. “To be honest, I wasn’t concentrating much on Mass because I was preoccupied with, what am I going to do with this board?”

“I said, ‘Please dear Lord, help me decide on what I want to do,’” she continued. “I don’t want to say I had a vision or anything like that, but felt enlightened and received the inspiration from our Lady of Guadalupe to paint her image. So I promised that I would.”

Francis believes she was called to paint the image of Our Lady because of all of the hate in the world and the religious persecutions that are occurring.

“Maybe it will help people pray,” Francis said. “I don’t know, but I hope it will. I put it up there to encourage people to say a Hail Mary every day because Lord almighty we need prayers in this world right now. There is so much evil going on out there.”

Even though the controversy is draining her energy, Francis is determined to keep the painting where it is.

“I’m going to put my Christmas decorations up and I’m going to put a laser light right on her,” she said. “If they don’t like it, too bad. I don’t want her destroyed and I’m not going to let it happen.”

“I never knew people could be like this,” Francis added. “In Ohio, we all stuck together and did things for each other. I’m not going to get on my knees and beg to keep it, and that’s what they want.”

Our Lady of Guadalupe is the patroness of Mexico and the Americas as well as the unborn.

One of the earliest Marian apparitions, the Virgin of Guadalupe has special significance for Catholics, in particular the Mexican people and the pro-life movement.

Our Lady appeared as an indigenous woman who was with child, and the apparition resulted in millions of Aztecs converting and being baptized to the Catholic faith in the years after her appearance – putting an end to the human sacrifices, particularly child sacrifices that they had practiced.

The feast of Our Lady of Guadalupe is approaching on December 12. Many Catholics will honor her over several days with Mass, processions, dances, receptions, and traditional Mexican meals.