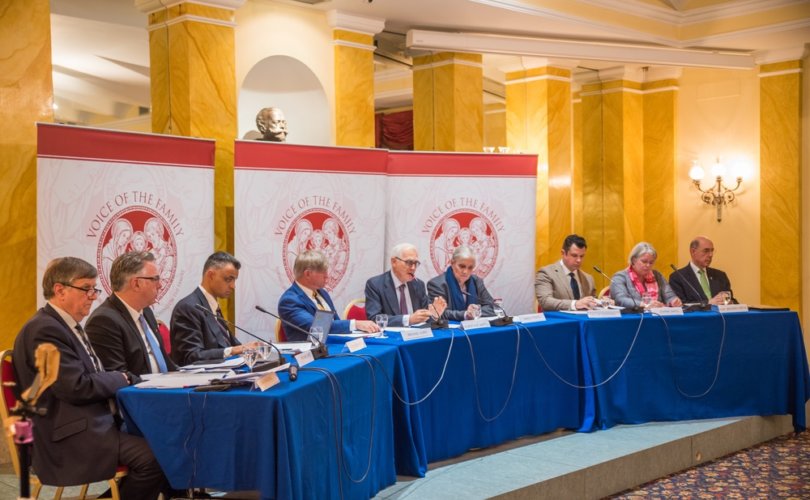 ROME, October 4, 2019 (LifeSiteNews) — Lay Catholic leaders from around the world, increasingly alarmed about the upcoming Amazonian Synod and how it threatens to disfigure and “Protestantize” the Church, gathered not far from the Vatican today to discuss their grave concerns.

The roundtable discussion, titled “Our Church – reformed or deformed?” was hosted by the international pro-life association Voice of the Family. Over 5,000 people across the continents tuned in.

“We have arrived. This week the Amazonian Synod will be underway,” said John-Henry Westen, co-founder and editor-in-chief of LifeSiteNews. “It is expected to be the most severe calamity for the faith the Church has ever known and let’s pray that it won’t turn out as dire as it threatens.”

“A few cardinals have warned of apostasy and heresy in the working document prepared for the Synod, but most have remained silent,” continued Westen. “We, the faithful, cannot remain silent because it is the faith of our children that is being threatened. It is our right as Catholics to have the faith of Jesus Christ handed down faithfully by our priests and bishops and especially the Pope.”

“There are, at this moment, two religions within the Catholic Church,” declared Professor Roberto de Mattei.

“The first is the traditional Catholicism, the religion of those who, in the current confusion, continue to be faithful to the immutable Magisterium of the Church,” said de Mattei.

“The second, until a few months ago without a name, now has a name: it is the Amazonian religion because, as declared by the person currently governing the Church, there is a plan to give the Church ‘an Amazonian face,’” explained de Mattei.

“Two religions cannot coexist within the same Church,” he reaffirmed.

“At the Pan-Amazon Synod, will we see the Church abandon that Divine Commission to convert and baptize all nations?” wondered Michael Matt, publisher of The Remnant, who spoke about the disappearance of traditional missionaries and religious orders.

He asked: “Will the Vatican bless and approve a certain indigenous theology whose animating principle is essentially pagan? Will the Church teach that pagan cultures themselves are of God because to suggest otherwise would be to engage in a sort of religious supremacism that holds Christianity as the only true religion?”

“Now we face a synod of bishops that promises to embrace an indigenous theology that would essentially abandon the Church’s missionary effort altogether while embracing an eco-theology that would send forth missionaries of climate change to teach all nations to listen to the cry of Mother Earth,” declared Matt.

“Please God, may this not come to pass, for if it does it will surely represent the Catholic Church’s formal surrender to the world and to the spirit not just of the age but also the jungle,” he pleaded.

José Antonio Ureta, a leader of the international Tradition, Family, and Property (TFP) movement in France, warned that if the synod fathers and Pope Francis approve the measure in the Instrumentum laboris (working document) to ordain elderly married men as priests, “neo-Lutheranism will have defeated the Council of Trent.”

“But, alas! Such new ecclesiastic structure based on a non-ministerial and non-hierarchical priesthood will no longer be the Catholic Church,” said Ureta.

“Pope Francis and his clerical allies are creating a globalist organization with a Catholic-appearing face,” said Church Militant’s Michael Voris. “What is emerging is not Catholic. The façade should be dropped and for once truth be allowed to prevail.”

Voris explained that Pope Francis has moved the Church to “align with a counterfeit kind of theology inspired by godless atheism, and in the rush to advance this, he’s surrounded himself with numerous clerical scoundrels — some who have been complicit in the performing of or cover-up of sex abuse of minors or young adults, mostly male.”

“The Catholic Church has been infiltrated from within and this infiltration goes back at least to the pontificate of Pope Pius IX,” said Catholic author Dr. Taylor Marshall. “It is an attack on the supernatural faith, miracles, divine revelation, and upon the origin of our creation: God’s identity of male and female, the institution of human matrimony, and the natural law precept to be fruitful and multiply with marriage. Moreover, it is a resurrection of paganism ‘that you might become gods.’”

“Pope Francis has signed a document in Abu Dhabi which contains a sentence which has explosive consequences for the Catholic faith,” said Italy’s Marco Tosatti. “Here it is: ‘The pluralism and diversity of religions, colour, gender, race and language are willed by God in His wisdom.’ The implications of a sentence of this kind are evident: if God has willed … that several religions should exist, it can be inferred that all religions are the divine will and therefore any person is free to choose the religion most suited to him or her.”

“This sentence is profoundly wrong from a Christian – and Catholic – standpoint,” said Tosatti.

“Personally, I believe that this declaration is one of the most devastating sentences for Catholicism ever uttered by a Pope, and that it is a substantial affirmation of relativism,” he added.

“Among the most obviously threatening innovations that are being introduced by the upcoming Amazon Synod is the promotion of some form of ordained ministry for women,” asserted French journalist Jeanne Smits.

She warned that the Indian theology which the synod will promote demands the ordination of women as ministers. “It is within the logic of traditional indigenous spirituality, that is, paganism. Or if you want to take it a bit further: idolatry.”

“The Amazon Synod will be arguing about the role of women in the Church, when the Church already has the most beautiful answer to that argument: the Virgin Mary,” declared Smits. “When God made the Cosmos – which means beauty – He was making a fitting earthly home and dowry for His Daughter, Mother, and Bride. She is our Queen, the Queen of the universe and even the Queen of the Angels, much to Satan's discontent, since he must submit to and be conquered by a mere woman, by a mother who can communicate to us eternal life through the sacrifice of her Beloved Son.”

“Our vision of woman is defined by that. What more could we possibly want?” asked Smits.

Accusation, fervent intercession, and a ‘time for heroes and saints’

“With all respect owed to the ecclesiastical authorities, I accuse all those who have approved, or will approve, the Instrumentum laboris on the Amazon, of polytheism and, more specifically, polydemonism because, quoting Psalm 95, ‘All divinities of the Gentiles are Demons; our Lord has instead created the heavens,’” said de Mattei.

“I call upon the cardinals and bishops who are still Catholic to raise their voices against this scandal. If their silence continues, we will continue to seek the intervention of the Angels and Mary Queen of Angels, to save the Holy Church from every form of reinvention, distortion, and reinterpretation,” added de Mattei.

John-Henry Westen pointed out that despite all the grave concerns raised by the panelists, This “is not to say that we don’t love Pope Francis. Indeed, it would not be love at all to gloss over these monumental concerns and be silent about them, because they harm him most of all. He will have to answer to Christ at judgement just like we all will.”

“We must continue to pray for the Pope every day, pray for his conversion,” said Westen.

“It doesn’t take a theologian to recognize when the faith is being distorted,” he added. “We won’t leave the Church; it is the One True Church and there is no other. We shall fight for Christ’s truth in the Church because we are ready to die for this faith.”

During the question and answer period, when the inevitable question about the possibility of schism was raised, Professor de Mattei said we must pray for “a real counter-reformation, a counter-revolution, a restoration of the real Christianity.”

Though we are waging war against the forces of chaos in the Church, “The division of our enemy is our strength,” said de Mattei.

“This is a scary moment,” said Michael Matt. “If this synod goes as predicted by several cardinals, this is the biggest news story in the history of the world with the exception of the crucifixion of God. Nothing is bigger than the Bride of Christ raising, hoisting the flag of surrender.”

“If this happens, this is a huge story and great people are going to come to the defense of the Church – heroes and saints,” proclaimed Matt. “Let’s prepare our children for a crusade, and let’s inspire them.”

LifeSiteNews is pleased to publish the text of the addresses given at the Amazon Synod Roundtable: