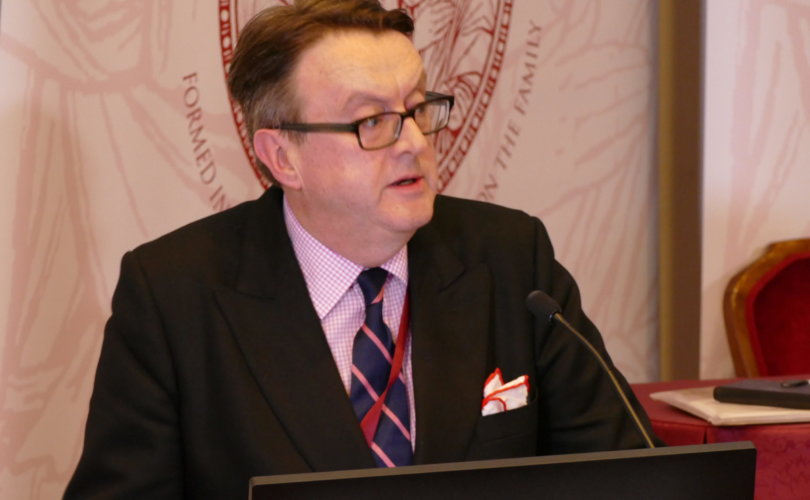 ROME, May 17, 2019 (LifeSiteNews) — An Irish life and family leader said his country’s Catholic leaders have largely surrendered to the “spirit of the world” and, in some cases, are even “wolves in shepherd’s clothing” as they work with worldly powers to “bring about the destruction and decline of Christian people.”

During his presentation at the Rome Life Forum at the University of St. Thomas Aquinas — better known as the Angelicum — Anthony Murphy, founder of the Lumen Fidei Institute and the Catholic Voice newspaper — recounted the swift, multifaceted decline of the Church in Ireland. The once famously Catholic country legalized homosexual “marriage” in 2015 and abortion three years later.

The decline did not begin without warning, Murphy recounted. Both Pope John Paul II and Pope Benedict XVI had implored Catholics on the Emerald Isle to remain faithful to Christ.

Your country seems in a sense to be living again the temptations of Christ: Ireland is being asked to prefer the “kingdoms of the world and their splendour” to the kingdom of God (cf. Mt 4:8).

Satan, the tempter, the adversary of Christ, will use all his might and all his deceptions to win Ireland for the way of the world. What a victory he would gain, what a blow he would inflict on the Body of Christ in the world, if he could seduce Irish men and women away from Christ…

“Sadly,” said Murphy, “Many, including our clergy and future bishops, ignored the warnings.”

“The decaying society we see all around us is a result of the twin cancers of liberalism and socialism,” said Murphy. “Both are anti-Christian” and “seek to replace the Church with the spirit of the world.”

“These treacherous partners have been behind the dumbing down and slow drip-feed destruction of our society, whether it be in dress, music, literature, heritage, history, culture, architecture, the heterosexual family unit, Christianity, God, nature, and much more,” said Murphy.

“Their symbols have replaced the symbol of the Cross,” he added.

Murphy noted that the “hammer and the sickle,” long the emblem of communism, which used to frighten children, “has now been replaced with the much friendlier rainbow flag of the LGBT community.”

“They brainwash our children with such words as ‘inclusion’ and ‘tolerance’ and openly teach them chronic degeneracy in our schools,” said Murphy. “They constantly talk about the values of ‘Liberal Democracy’ so as to suggest to us that ‘without liberalism,  we would not have democracy.’”

“This again is a great lie,” added Murphy.

Those running the liberal left today have “taken over our educational institutions, and they now have direct access to our children,” said Murphy.

The Church is surrendering to worldly powers

“Against this totalitarian backdrop, the conservative movement, which was traditionally the friend of the Church, and defender of Christian values,” averred Murphy, “no longer understands” what it stands for.

The Church is in a state of crisis because conservatives have convinced themselves that the forces of liberalism — and in particular the LGBT agenda — are “unstoppable.”

“The Church, which has traditionally been the moral compass and the moral arbiter, has retreated to the peripheries,” said Murphy. “In fact, we are a church of the peripheries because the Church in Ireland is no longer present in the public square.”

“We see a surrender to the worldly powers,” continued Murphy, “and we even see ‘wolves in shepherd's clothing’ directly collaborating with the worldly powers to bring about the destruction and decline of Christian people.

Faithful Catholics now find themselves as enemies of liberal bishops

He explained that faithful Catholics are now now viewed as enemies of some bishops.

Defending the faith and the immutable definition of marriage, or standing up against the LGBT agenda, “can now incur the wrath of bishops,”said Murphy. “This is the scandal we live with today.”

Murphy further emphasized how the threats to the Church are not just outside her walls, but within, saying, “In Ireland we are directly opposed by members of the hierarchy.”

He said Dublin’s Archbishop Diarmuid Martin has been reluctant to defend the Church against the evil forces now pressing down upon her. He gave examples of how Ireland’s most influential prelate is more aligned with the teachings of the world than those of the Church.

The Decline of Priestly Formation in Ireland

“The only seminary left in Ireland, St. Patrick’s College Maynooth, has been in a deplorable state for several decades, and our bishops have failed to take serious and decisive action to correct matters,” said Murphy.

“In May 2015, a number of seminarians from one class had been asked to take time out on account of their orthodoxy, or, as the Maynooth authorities preferred to label it, ‘theological rigidity,’” explained Murphy.

“In 2016, a seminarian who had concerns over the existence of a homosexual subculture within the seminary was suspended by the seminary authorities,” he continued.

“All we can conclude is that the leaders of our Church have no interest in cleaning the filth from the Church,” said Murphy.

Murphy spoke of Father David Marsden, who has been persecuted by Church leaders for singlehandedly combatting the homosexual subculture in seminaries in the British Isles.

Father Marsden challenged a notorious homosexual seminarian about his disordered lifestyle. His arrogant response was “my bishops knows, the seminary council knows, my spiritual director knows; none of them have a problem with it, so neither should you.”

The Demise of Catholic Education in Ireland

“Students in Catholic schools are exposed to pagan rituals and other religions,” said Murphy. “The only thing they are not exposed to is the Catechism.”

He noted that the Irish Parliament is considering a sex education bill that will promote the LGBT agenda, including gender ideology, in every school in the nation. Murphy declared that this is “child abuse,” yet the Church in Ireland has remained silent and has not pushed back.

Murphy noted that when the British government tried to initiate similar gay and transgender teaching in schools, it was not the Catholic and Protestant parents who protested; It was the Muslim parents who demanded that schools stop. They were successful.

“Why do we need to rely on the Muslim population to defend our Christian civilization?” asked Murphy.

Throughout his presentation, Murphy implored faithful Catholics to be courageous and stand up against the influence of the world storming the Church.

The Rome Life Forum, which draws pro-life and family advocates from around the world, is hosted by Voice of the Family and co-sponsored by LifeSiteNews, Associazione Famiglia Domani (Italy), Family Life International New Zealand, and the Society for the Protection of Unborn Children (U.K.).