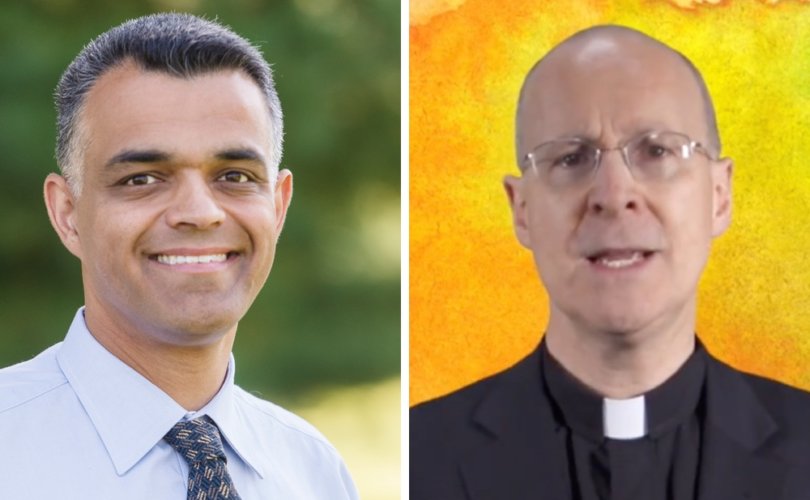 DUBLIN, Ireland, August 23, 2018 (LifeSiteNews) – To not tell Catholics who identify as LGBT that homosexual acts will lead them to hell is actually showing them hate. This was the bold message delivered Wednesday to the family conference running concurrent to the Vatican’s LGBT-affirming World Meeting of Families (WMOF) in Dublin, Ireland this week.

Telling the truth to LGBT Catholics is urgent, LifeSiteNews’ co-founder and Editor-in-chief John-Henry Westen said, because we decide where we’re going for all of eternity by our choices and actions during our lives.

“It’s hate not to tell LGBT Catholics that gay sex leads to hell,” he told attendees at “A Conference of Catholic Families.”

Westen noted for the audience how not more than 10-minutes’ walk from the Conference locale Jesuit Father James Martin would be delivering the message to Catholic families at the Vatican-presented WMOF that homosexuality and transgenderism are normal and should be welcomed as such in Church life.

Indeed, the Vatican advisor and pro-LGBT Jesuit priest Fr. Martin told participants at the WMOF today that homosexuals and their families must be welcomed into parishes and “invited into parish ministries” specifically mentioning them becoming “eucharistic ministers.” He called on Catholics to be advocates for homosexuals.

Pro-life and family Catholics were incensed that the ubiquitous LGBT-affirming activist priest would speak at the event, some petitioning against it or declining to attend because of the scandal Martin’s dissent from Church teaching on sexuality would create.

Martin’s appearance was one of several signs in the months leading up to the WMOF signaling an LGBT affirmation rooted in the event.

There were also images of same-sex couples and pro-homosexual text included in WMOD promotional material, LGBT language was used in a WMOF brochure created to seek volunteers for the event, and a video produced by the Irish bishops to prepare Catholics for the WMOF cast Church teaching on homosexuality in a negative light.

Concerns over the LGBT push via the WMOF led the Lumen Fidei Institute to organize “A Conference of Catholic Families” as a WMOF alternative for Catholics that would honor Christ’s vision for marriage and family life based on magisterial Church teaching.

To illustrate that one cannot be silent about the dangers of homosexual activity, Westen pointed to the 1986 document from the Congregation for the Doctrine of the Faith (CDF) titled, “Letter to the Bishops of the Catholic Church on the Pastoral Care of Homosexual Persons,” which emphasized the necessity of “clearly stating that homosexual activity is immoral.”

“But we wish to make it clear that departure from the Church's teaching, or silence about it, in an effort to provide pastoral care is neither caring nor pastoral,” it states. “Only what is true can ultimately be pastoral. The neglect of the Church's position prevents homosexual men and women from receiving the care they need and deserve.”

“This is the teaching of the Church,” Westen said. “What we are hearing 10 minutes away is not.”

“It is actually not caring and not pastoral to be silent on these things,” he added.

Ireland has had huge and heavy crosses to bear, said Westen, citing that the country had received no support from Rome in 2015 on its same-sex “marriage” referendum, nor for the abortion referendum earlier this year. Same-sex “marriage was embraced and the country’s eighth amendment protecting the lives of preborn babies was overturned.

The question becomes very real for parents, he told the Conference, and implored Catholics to be faithful in their prayer life, and to make sure they are practicing the faith in the sexual realm.

Westen reminded the Conference that the first vision seen by the three shepherd children of Fatima in 1917 was a vision of hell, interesting, he said, because Our Lady wanted to point to the errors that were upcoming.

The Blessed Mother also made a telling prediction to Jacinta regarding impurity, also saying; “More souls go to Hell because of sins of the flesh than for any other reason.”

Westen referenced several sources, some of them unlikely, to explain the logic and concrete need in acting to save sexually confused souls from hell.

These included atheist performer Penn Jillette who’d asked in 2008, “How much do you have to hate somebody to believe that everlasting life is possible, and not tell them that?”

“It’s hate not to tell same-sex-attracted Catholics that gay sex leads to hell,” Westen stated. “It’s not love – as what it’s painted as 10 minutes’ walk from here.”

Westen noted there are many studies showing the detrimental effects to the body, mind, emotions of same-sex behavior, including a 20-year shorter lifespan, abuse, and sexually transmitted diseases.

“This lifestyle harms your body, your mind and your heart, but it also harms your soul,” Westen said. “And it is hate not to tell same-sex attracted people that.”

Regarding transgenderism, he pointed out how it would be considered mentally ill to surgically remove any other healthy body part, but in the case of healthy sexual organs, it’s considered fine and good, paid for by tax dollars and celebrated – even when done to little children.

A most common line heard when you confront any of this is to be called a hater and a bigot, Westen said, but the reality is doing so means you love same-sex attracted individuals.

“How many of us actually detest sins?” asked Westen. “Have we been asking for the grace to detest sin? We need to be.”

The Catholic laity has to beg Church leaders to actually do what they’re called to do, he said, because it’s tough to stand up on these truths, recalling the sad example of Ireland’s Church hierarchy recently agreeing to counsel those in a same-sex “marriage.”

The late Columbian Cardinal Alfonzo Trujillo had said that allowing homosexual adoption equates to moral violence against the child, Westen noted, and the cardinal had explained that it was out of love that the Church was pointing out these dangers.

Pope Benedict XVI spoke repeatedly about the issue as well, saying in 2008 that the Church must “protect man from self-destruction,” and later in 2010, stating how the Fatima message was evident in that “the greatest persecution of the Church comes not from her enemies without, but arises from sin within the Church.”

Guinean Cardinal Sarah spoke in March of 2017 about a “serious crisis of faith” not only especially “among many priests and bishops,” as well as “the serious crisis that the Church is going through: relativism in doctrinal, moral and disciplinary teaching, grave abuses, the desacralization and trivialization of the Sacred Liturgy”

Westen also quoted Our Lady of Akita in 1973 saying the work of the devil would infiltrate the Church and cause division among prelates.

“You can watch all the sufferings we are now experiencing with joy,” Westen said, because you know that in the end the Immaculate Heart will triumph.”

He told the Dublin Conference how Sister Lucia, the Fatima seer who lived to adulthood, had recounted in a letter to the late Cardinal Carlo Caffara that Our Lady told her “the final battle between the Lord and the reign of Satan will be about marriage and the family.”

And he said Our Lady had told Lucia that those who work for the sanctity of marriage and family would be opposed, but that she had already crushed the serpent’s head.

Westen urged those at the Conference to be no longer silent in defense of children, the Catholic and liturgy, and the Eucharistic Lord. The right and duty for the lay faithful to do so is affirmed by both Canon Law and St, Thomas Aquinas, he added (Can. 212 §3) and (II-II Q. 33, art. IV.) respectively.

“We must be silent no more,” Westen said. “We must not allow the abusers of our children to have the pedestal as they’re having 10 minutes away.”