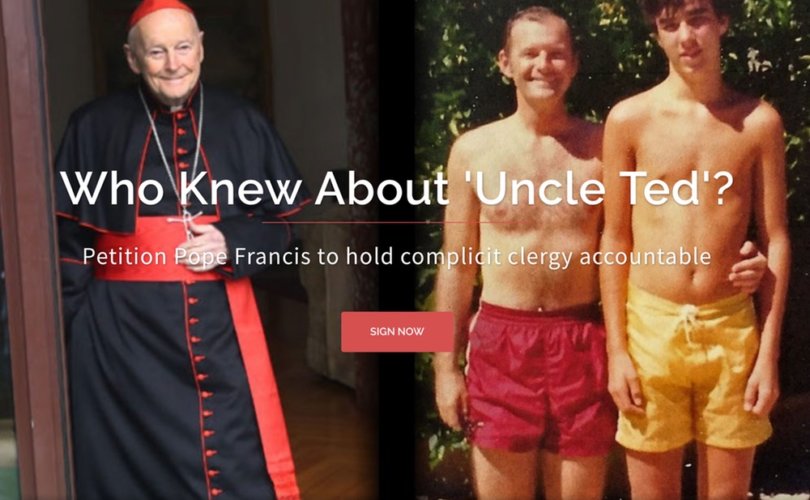 USA, August 15, 2018 (LifeSiteNews) – Catholic laymen have launched a website that exposes a vast network of high-ranking Catholic clergy and organizations that they say knew or should have known about the sex scandal of disgraced former cardinal Theodore McCarrick.

ComplicitClergy.com includes a dynamic map illustrating the connections between McCarrick and other highly-placed clerics who must have, or should have, known about McCarrick’s sexual misconduct.

The archbishop emeritus resigned from the College of Cardinals after the Archdiocese of New York admitted that there were “credible allegations” that he had sexually abused a minor. Since the June 20 announcement, several other men have come forward to accuse McCarrick of having sexually abusing them as minors, seminarians, or priests. Others have said that McCarrick’s active homosexuality is “an open secret” that “everyone knew”. But several high-ranking clerics close to McCarrick, including Bishop Kevin Farrell, have stated that they did not know of McCarrick’s unsavory reputation.

The “Complicit Clergy” blog allows readers to explore McCarrick’s connections to other high-ranking churchmen and to examine the nature of these relationships.

In a press release for the group, spokesman Michael Hichborn said there appears to be a “code of silence” among American bishops and cardinals when it comes to the sexual abuse of minors and young adults.

“Faithful Catholics are completely fed-up,” he said. “The clergymen closest to McCarrick would have us believe that everyone knew about McCarrick except for them. No way!”

Hichborn pointed out that McCarrick’s actions were not only grave sins but actual sacrilege, violating his vow of chastity and causing serious scandal to the Catholic Church.

“The only thing worse than McCarrick’s actions is that so many bishops apparently knew about McCarrick and failed to act,” he said.

The “Complicit Clergy” website stated that the project was born of the frustrations of a small group of Catholic laymen disgusted that Theodore McCarrick had been allowed to abuse so many young men over decades. Calling the USCCB’s 2002 Charter for the Protection of Children and Young people “a failure, possibly by design,” the writers pointed out that the bishops had consciously removed themselves from the scope of the “zero tolerance” policy.

“It was clear to us that the Catholic bishops could no longer be trusted to police themselves. We became convinced that a laity-led initiative was required to cleanse the Church and establish a culture of accountability,” states the laymen on the website.

The “Complicit Clergy” website is a “first contribution” by laity towards cleansing the Church in the USA, identifying which bishops knew, or should have known, about McCarrick’s sexual misconduct and demanding that they resign or be removed from their offices.

It includes a “bishop list” of McCarrick’s cronies, a petition to Pope Francis to take action, the “McCarrick Connections Map”, an aggregated news feature to keep Catholics informed on developments, a feedback forum for comments, a submission page for those who have new evidence that a bishop should have known about McCarrick’s misconduct, and prayers.

“Because of our vocations, roles and responsibilities, we have decided to keep identity anonymous [for now],” the website added. “Additional initiatives are planned to be rolled-out over time. We entrust our efforts to the patron saint of the United States, Mary our Mother. Mary, Queen of the Church, please pray for us.”