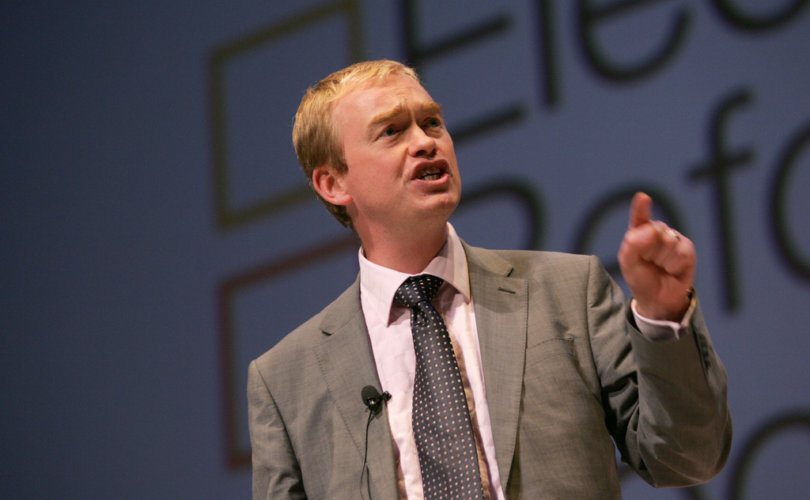 LONDON, May 18, 2017 (LifeSiteNews) – As Britain gears up for its June 8 general election, the leader of Britain’s leftist third party has abandoned his pro-life stance under questioning from the press.

After Liberal Democrat party leader Tim Farron was first elected a Member of Parliament in 2007, he gave an interview to the Salvation Army’s magazine War Cry in which he stated “Abortion is wrong. Society has to climb down from the position that says there is nothing objectionable about abortion before a certain time. If abortion is wrong, it is wrong at any time.”

But on Tuesday, when questioned about these statements by the UK’s left-wing Guardian newspaper, Farron denied them, claiming that he had never heard of, read, or seen War Cry. “I am pro-choice,” Farron said. “I believe that abortion should be safe and legal and that the limit should be set by science.”

England’s Society for the Protection of Unborn Children voiced its disappointment in Farron. “This kind of opportunism demonstrates the worst face of politics,” said spokeswoman Antonia Tully. “Mr Farron is betraying unborn babies for political expediency. He fails to think the law should protect the most vulnerable from lethally unjust treatment even though he appears to know (or have known) that they are indeed being treated in a very immoral way.”

Farron, who identifies himself as an evangelical Christian, has come under scrutiny in recent months regarding his privately held views on homosexuality. After giving answers critics called evasive, Farron told British Channel 4’s Cathy Newman that he was passionate about “equality, about equal marriage and about equal rights for LGBT people, for fighting for LGBT rights, not just in this country, but overseas.”

In recent debates over the United Kingdom’s abortion laws, Farron abstained from voting for or against decriminalizing abortion up to 24 weeks (2017), an amendment making explicit that gender selective abortion is illegal (2015), an amendment banning the abortion industry from providing “counselling” (2011), and at least three other amendments aimed at reducing the legal limit on abortion (2008). In 2006, however, he voted in favour of a Bill that would have reduced the legal limit on abortion to 21 weeks and introduced both compulsory counselling and a “cooling-off period.”

Farron, 47, is a married father of four children. He was elected leader of the Liberal Democratic Party in 2015. At the election call, the party held 9 seats in Britain’s House of Commons.