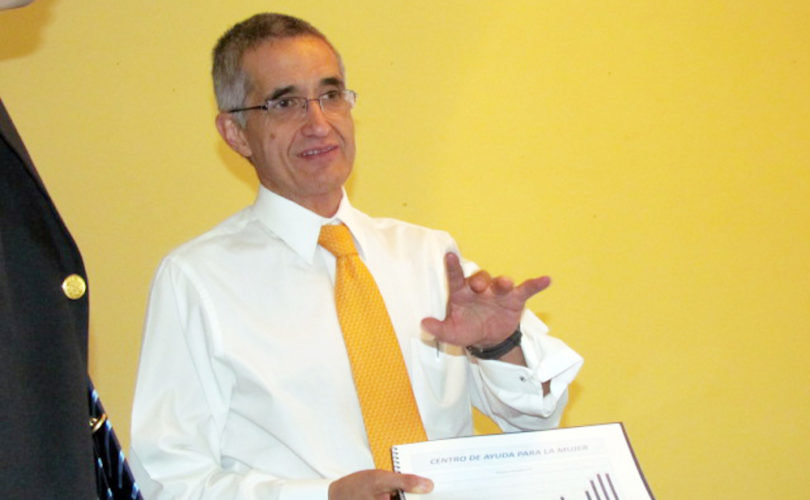 MEXICO CITY, February 25, 2016 (LifeSiteNews) – After a series of criminal prosecutions incited by pro-abortion groups that have lasted more than a decade, Jorge Serrano Limón, the country's most famous pro-life leader, has been arrested on charges that appear similar to those of which he was already acquitted in 2012.

Serrano was detained by authorities on February 17, the last day of the visit of Pope Francis, a trip in which the pope firmly supported the right to life and the Catholic Church's rejection of abortion. Serrano's bond was set at almost 26 million pesos (about 1.37 million dollars). After a three-day stint in Mexico City's Men's Preventative Prison, Serrano was freed on bail while he awaits trial on the charges.

According to numerous, virtually identical reports in the Mexican press, Serrano was arrested in accordance with an order of apprehension that was issued in October of 2015 but not enforced until Wednesday of last week. He was charged with the embezzlement of 25,764,539 pesos granted to the National Pro-Life Committee by the federal government's Secretariat of Health in 2003. The charges seem related to a longstanding accusation made against Serrano by a coalition of pro-abortion groups, which accused him in 2004 of “embezzling” 30 million pesos granted by the Secretariat of Health because he spent the money in ways they deemed inappropriate.

Although the charges announced by federal prosecutors were vague, the ultra-liberal magazine Proceso reported that a government audit had found “various irregularities and grave faults in the management of funds that the federal government assigned to him to equip the CAM [Centers of Attention for Women].” If true, the charges are similar to other charges of which Serrano was acquitted in 2012, when his conviction for purchasing equipment for his CAMs was thrown out in a final decision by an appeals court.

Serrano became president of the National Pro-Life Committee in 1988. Since then, the organization has saved over 150,000 lives from abortion.

According to Serrano, the current case against him would constitute the sixth time that authorities have attempted to prosecute him for mismanaging the funds granted to him in 2003, although this was the first time that authorities arrested him and forced him to spend time in prison, a fact over which the pro-abortion Mexican media have gloated in its headlines.

Although Serrano's arrest last Wednesday was reported by dozens of Mexican media outlets, his release on bond was reported by very few. This was also the pattern in 2012, when Serrano's 2009 conviction and sentence to four years in prison and a fine were completely reversed on appeal. While the 2009 conviction was widely reported, the reversal of the sentence was covered by virtually none of the nation's major media. In current summaries of the history of the attempts to fine and prosecute Serrano, major media outlets are continuing to cover up the 2012 nullification of his previous conviction, falsely claiming that he was required to pay a fine but wasn't imprisoned. The only exception seems to be the newspaper El Universal, which has provided more balanced coverage.

The media continue to repeat accusations against Serrano that were long ago answered by the National Pro-Life Committee, particularly the scandalous claim that his organization used government funds to buy “tangas” – that is, lingerie-style underwear – pens, and other miscellaneous items that pro-abortion organizations claim are not justified in accordance with the 2003 grant money received from the federal government. The National Pro-Life Committee says that the items were personal effects that women were permitted to purchase while they were in the care of the CAMs, which was covered under the rubric of helping women who were seeking abortions. However, major media continue to widely repeat the accusation twelve years later, without providing context or the response of the Committee.

Esteban Arce, a television commentator who hosts the well-watched program “Morning Express,” expressed his disgust at the treatment of Serrano, who he notes has saved thousands of Mexican infants from abortion.

In a message issued on his Twitter feed on February 17, Arce lamented that “[t]he man who has saved more human lives in Mexico #jorgeserranolimon was sent to prison over administrative matters. And in the face of the pope.”

In a second tweet, Arce wrote, “@SFP_mx [the Secretariat of Public Functions] has detained #jorgeserranolimon for a minor administrative infraction … A disgusting shame, given that he's #provida [pro-life].”

Mexico's Family Network (Red Familia), a coalition of pro-life and pro-family organizations, said in a press communiqué that “we are conscious of the process of investigation to which Jorge was subjected by the authorities. Furthermore, we note a clear attack against pro-life and pro-family thought and actions that has grown considerably in the population and that he has annoyed many people, radical organizations, and government institutions.”

“We call on the president of the Republic, Enrique Peña Nieto, and on the corresponding authorities to give Jorge a trial that is legal and just and that adheres to a full respect for human rights.”