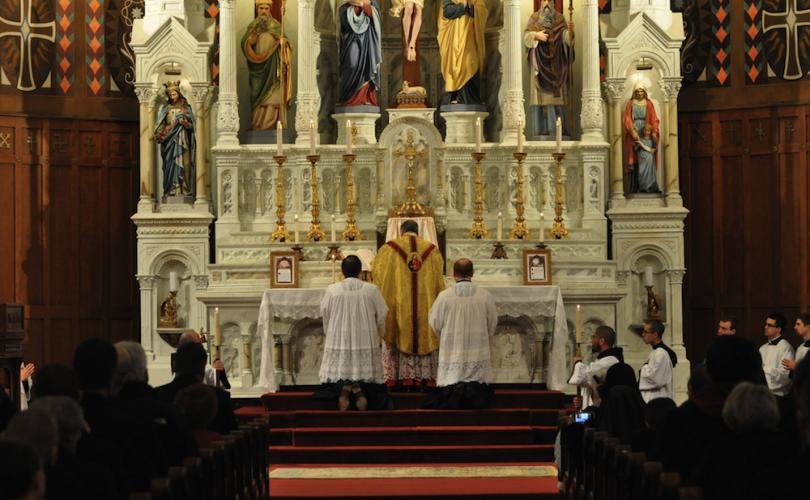 The priests and abbots have asked for a “humane, personal, trusting dialogue” and promised to “convert if party spirit or pride has polluted our hearts.”

The joint statement, issued on September 2 in English and in French, addresses Pope Francis’ recent restrictions on the Traditional Latin Mass (TLM) in Traditionis Custodes. It asks for security for the members of the traditional communities in their way of life, something which Dr. Peter Kwasniewski described as the statement’s “strongest argument,” as a substantial change to the rule of such communities would be an “internal ecclesiological contradiction.”

A message of submission from Courtalain

The twelve superior-generals met on August 31 in Courtalain, France. They represented male and female Ecclesia Dei communities, groups devoted to the celebration and promulgation of the Church’s ancient liturgy. Courtalain is home to the seminary of one of the communities, the Institute of the Good Shepherd (IBP).

Joining superiors from well-known traditional communities – the Priestly Fraternity of Saint Peter, the Institute of Christ the King Sovereign Priest, the Institute of the Good Shepherd – with those from less known societies and with abbots from France’s traditional Benedictine monasteries, the meeting was an extremely rare event.

“The signatory Institutes want, above all, to reiterate their love for the Church and their fidelity to the Holy Father,”  the letter began before explaining that this love is “tinged with great suffering today.”

“We feel suspected, marginalized, banished,” wrote the signatories, adding that “we do not recognize ourselves in the description” which Pope Francis gave of those devoted to tradition in the letter accompanying Traditionis Custodes.

The papal letter has been described as “worse than the MP [Traditionis Custodes] itself.” In it, the Pope attacked “the instrumental use of Missale Romanum of 1962” which, he said, “is often characterized by a rejection not only of the liturgical reform, but of the Vatican Council II itself, claiming, with unfounded and unsustainable assertions, that it betrayed the Tradition and the ‘true Church’.”

Twelve signatories firmly denied the papal accusation, writing: “We do not see ourselves as the ‘true Church’ in any way. On the contrary, we see in the Catholic Church our Mother in whom we find salvation and faith.”

In one passage, the signatories reaffirmed their “adherence to the magisterium (including that of Vatican II and what follows), according to the Catholic doctrine of the assent due to it (cf. in particular Lumen Gentium, n ° 25, and Catechism of the Catholic Church , n ° 891 and 892), as evidenced by the numerous studies and doctoral theses carried out by several of us over the past 33 years.”

If any of their members had evidenced “excess of language or mistrust of authority,” the signatories said they were “ready to convert if party spirit or pride has polluted our hearts.”

— Article continues below Petition —
SIGN: Show Pope Francis the Latin Mass will survive any suppression
Show Petition Text
36559 have signed the petition.
Let's get to 40000!
Thank you for signing this petition!
Add your signature:
Show Petition Text

Plea for ‘dialogue’ and a ‘mediator’

Presenting the situation of thousands of men and women who “gave their lives trusting on the word of Popes John Paul II and Benedict XVI,” the superiors asked Pope Francis to heed the promise of the 1988 document Ecclesia Dei that “all measures would be taken to guarantee the identity of their Institutes in the full communion of the Catholic Church.”

The superiors wrote that it was to “this specification” that members of the traditional institutes have made their vows “trusting in the word of the Supreme Pontiff.”

“These priests and men and women religious served the Church with dedication and abnegation,” they continued.

Dr. Peter Kwasniewski described this appeal as the “strongest argument in the document.” The expert liturgist told LifeSiteNews that it would be “simply contrary to justice” to force the members of the Ecclesia Dei communities to “do something entirely different from what they understood and consented to.”

“Theologians often teach that the papal approval of the rule or constitution of a religious community (order, institute, society, etc.) is infallible because of the grave evils that would ensue if it were later found to be inherently heretical, schismatic, or harmful,” stated Kwasniewski.

“If the current Vatican regime proscribes the rule or constitution of these communities after having approved them earlier, we would see yet another instance of the belief that the Church’s past and present are irreconcilably incompatible, which would amount to an internal ecclesiological contradiction.”

LifeSiteNews also spoke with Br. Martin Navarro, of the Oblates of St. Augustine, who expressed concern that the superiors seemed only to look for protection for fully professed, or ordained members. “But what about the future? What about the seminaries? What about the rest of us?,” he asked. “The accompanying letter to Traditionis Custodes by Pope Francis clearly confirmed his intention that the Traditional Latin Mass is to be forbidden to and forgotten by the future generations of Catholics.”

Employing ‘rhetorical judo’ to dialogue with the Vatican

The signatories employ themes often found in Pope Francis’s own writings, speaking of “dialogue” and “mercy” and quoting from Vatican II’s document on the liturgy, Sacrosanctum Concilium, as well as from Francis’s controversial 2016 apostolic exhortation Amoris Laetitia.

Petitioning for “listening and goodwill, not condemnation without prior dialogue,” the signatories revealed their communities are set to undergo “disciplinary apostolic visits.”

“We ask for fraternal meetings where we can explain who we are and the reasons for our attachment to certain liturgical forms,” they wrote.

Appealing once more to the Pope’s own words, the signatories noted how “in liturgical matters, ‘unity is not uniformity but the multifaceted harmony created by the Holy Spirit’.”

“We are eager to make our modest contribution to this harmonious and diverse unity,” added the twelve superiors.

Kwasniewski described the use of recent papal phraseology as “an interesting rhetorical judo move,” but one which “may not be effective with prelates for whom honesty or consistency is not a priority.” He noted how the signatories were attempting to “highlight the discrepancy between how they are now being treated and how they ought to be treated as Catholics in good standing. In effect, they are asking Rome not to be hypocritical, judgmental, intolerant, and against diversity.”

Concerns about the document were also raised online by Father John Stone, who styled the letter “pure appeasement where can be no appeasement. The Pope has enlisted his many sycophants to assist him in a canonical & theological pogrom against traditional Catholics. We must resist or face extinction.”

The signatories closed by quoting from Amoris Laetitia once more, addressing themselves to the French bishops and asking that “a true dialogue be opened and that a mediator be appointed who will be for us the human face of this dialogue.”