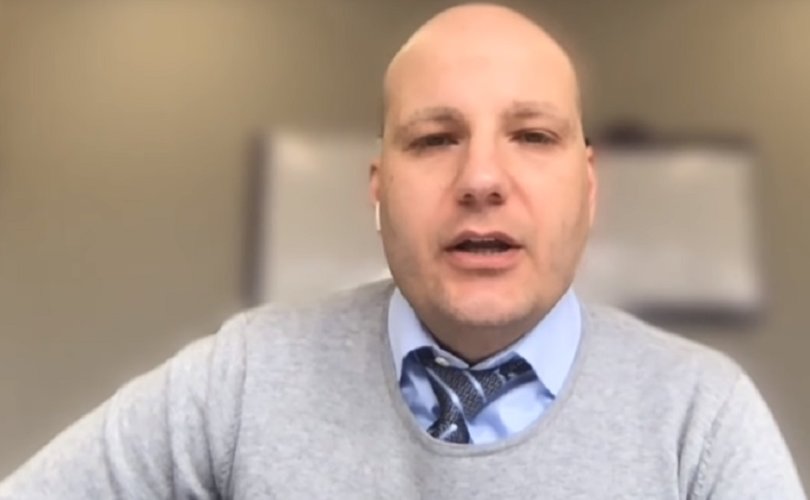 The socially conservative Karahalios announced on March 24 that an urgent request before the Ontario Superior Court to consider his application was approved.

On Wednesday of this week, Karahalios announced via this Twitter message that CPC lawyers have brought a motion to strike his claim out of court, which was heard today.

Karahalios was banned by a Conservative Party subcommittee from running for the leadership of the party, even though he had submitted the required signatures and funds to be eligible to run in the race.

In a March 20 statement, the CPC said the Dispute Resolution Appeals Committee (DRAC) had ruled that Karahalios, an Ontario lawyer, was officially disqualified from the race. No reason was given.

According to information sent to LifeSiteNews from the legal firm representing Karahalios, he is asking that the party immediately reinstate him for three reasons.

The first reason, according to Karahalios’s lawyers, is that he feels that the party disqualified him in bad faith, “once it became apparent, he would meet the ballot criteria,” which he did achieve before the March 25 deadline.

The second reason given in the demand for Karahalios to be reinstated as a party leadership candidate revolves around the issue that his disqualification did not follow party rules.

“Only the Party’s Leadership Election Organizing Committee has such authority for candidates who violate the Rules, and LEOC voted not to disqualify Mr. Karahalios. That is not right.”

The third reason is that his legal team says “the principles of natural justice and procedural fairness” were offended by his disqualification.

According to the Karahalios legal team, they say that so far, his campaign funds raised and submitted have not been returned to him, which is a violation of party rules.

In the same notes sent to LifeSiteNews, Karahalios’s lawyers say the party disqualified him “as a result of a complaint filed by the Erin O’Toole campaign requesting his disqualification.”

Karahalios sent an email to his followers in early March with the title, “Say NO to Shariah Law. Stop Erin O’Toole.” O’Toole complained publicly that Karahalios was a “racist” for this email.

Karahalios’s lawyers clarified that although some sources have reported that his disqualification came from a complaint by a group called the Urban Alliance on Race Relations, “[t]his is not accurate. As the documents in the Application Record indicate, the Party’s investigation and disqualification were explicitly in response to the O’Toole complaint only.”

According to Karahalios’s lawyers, the lead up to his disqualification in procedural terms was based around three critical points, which are detailed in the court affidavit. These are:

(a) LEOC met and concluded that Mr. Karahalios should not be disqualified; and (b) a committee appointed by LEOC (itself a committee of appointees) then nevertheless disqualified Mr. Karahalios without the authority to do so and without providing any reasons for doing so; and (c) although aware of Mr. O’Toole’s anti-Shariah email, the Party did not sanction Mr. O’Toole at all.

“What happened to Mr. Karahalios was not right. Party appointees should not be disqualifying grassroots candidates who attack the Party’s establishment when they threaten the candidacies of establishment candidates like Mr. O’Toole. The Party leadership should leave it to the Party’s members to democratically choose their leader,” said Karahalios’s lawyers.

“CLC is very pleased that Jim Karahalios has gone to court in order to have his candidacy reinstated. His unethical disqualification at the hands of red Tory progressives was an affront to democracy, and we cannot allow it to stand,” said Fonseca.

“He broke no party rule. The establishment swamp simply didn’t want to take a chance that a true blue, social conservative might win, so they just removed him from the ballot, Jimmy Hoffa style.”

Karahalios is one of four candidates who have the backing of CLC. Only two of these candidates with CLC’s backing, Derek Sloan and Leslyn Lewis, made it to the final ballot. Like Karahalios, another candidate with CLC support, Richard Décarie, was barred from the leadership race, with no official reason given.

The CPC leadership race was ”temporarily suspended” in late March in response to calls for a delay because of the coronavirus epidemic.

Along with Lewis and Sloan, the two other candidates in the running are pro-abortion Peter MacKay and Erin O’Toole.

Fonseca noted to LifeSiteNews that Karahalios being rejected as a candidate “was totally undemocratic” and “represents a rigging of the election to help ensure that the establishment’s preferred choice of MacKay or O’Toole would win.”

“Perhaps the establishment fears Karahalios more because he has been very effective in taking on O’Toole? In any case, the party has no right to block candidates just because it prefers someone else to win.”

Karahalios won a lawsuit against the Ontario Provincial Progressive Conservative Party in 2017 after the party claimed he unlawfully used a mailing list from his 2015 P.C. leadership race.

“Jim won a lawsuit against the provincial PC Party, and it's our sincere hope that he wins again against their federal cousins. Jim has earned the right to be on the ballot, and grassroots members have a right to vote for a leader chosen by them, not by the establishment,” said Fonseca.

CLC has an active petition with 1,900 signatures demanding that the CPC reinstate Karahalios.