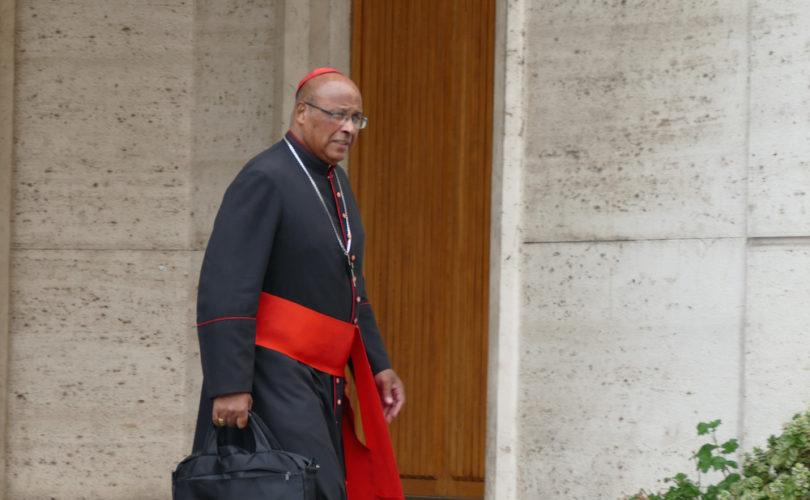 UPDATE 10/13/15 at 1:03 EST: Cardinal Napier has now said that he was not intending to comment on Father Rosica in his tweet. And in two tweets October 10, he directed criticism at the headline for emphasizing the need to meet people “where they are” while omitting the second part of Rosica’s quote that God “doesn’t want [them] to stay there.” As reported below, however, the strong emphasis of Father Rosica’s remarks at the October 6 press conference was on the need to “embrace reality” and adapt accordingly, rather than to draw people back into the true reality of God’s plan for marriage.

Father Rosica did not give another summary of Synod interventions until Saturday, October 10. There, he seemed to temper his remarks, perhaps reacting to criticism, by noting the importance of mercy and truth.

ROME, October 9, 2015 (LifeSiteNews) – South African Cardinal Wilfrid Napier, a leading cardinal on the organizing committee for the Synod on the Family, issued a pointed critique on Twitter of a controversial report on the Synod by the Vatican’s English-language spokesman, Fr. Thomas Rosica, in which the priest emphasized that the Church should “embrace reality” in dealing with sinful situations.

Rosica’s summary of Synod fathers’ addresses at Tuesday’s press briefing was criticized for its emphasis on liberal proposals and the strong language he used to describe them. The remarks fuelled ongoing concerns from last year’s Synod about the manipulation of the message by the Vatican press office and the Synod’s organizing body.

After the press conference, Salt and Light TV, Rosica’s Toronto-based media organization, tweeted out a link to an article about Rosica’s remarks, saying, “Fr. Rosica Speaks on Synod Delegates, The Need to Embrace People Where They Are.”

In reply, Napier tweeted: “‘Meet people where they are’ sounds nice, but is that what Jesus did? Didn't he rather call them away from where they were?”

@saltandlighttv “Meet people where they are” sounds nice, but is that what Jesus did? Didn't he rather call them away from where they were?

At Tuesday’s press conference, Rosica had said, “There must be an end to exclusionary language and a strong emphasis on embracing reality as it is. We should not be afraid of new and complex situations. … The language of inclusion must be our language, always considering pastoral and canonical possibilities and solutions.”

Napier has been among the more outspoken tradition-minded Synod fathers. His criticism of last year’s controversial interim report at the Synod, given at a Vatican press conference, made international headlines. “The message has gone out and it's not a true message,” he said. “Whatever we say hereafter is going to be as if we're doing some damage control.”

Toronto Cardinal Thomas Collins spoke on a similar theme as Napier’s tweet during his intervention at the Synod this year, emphasizing the need to promote repentance and conversion while the Church accompanies people. He described his three-minute speech to Catholic News Service on Thursday.

“The truest compassionate mercy is a compassion that challenges,” explained the cardinal. He said meeting people “where they are” comes first, “but that is only the first thing. The second thing is to help them become what God wants them to be.”

“Just to have accompaniment as people are moving in the direction away from the Lord is not enough. We need to be with them in order to help people to follow our Lord,” he added.