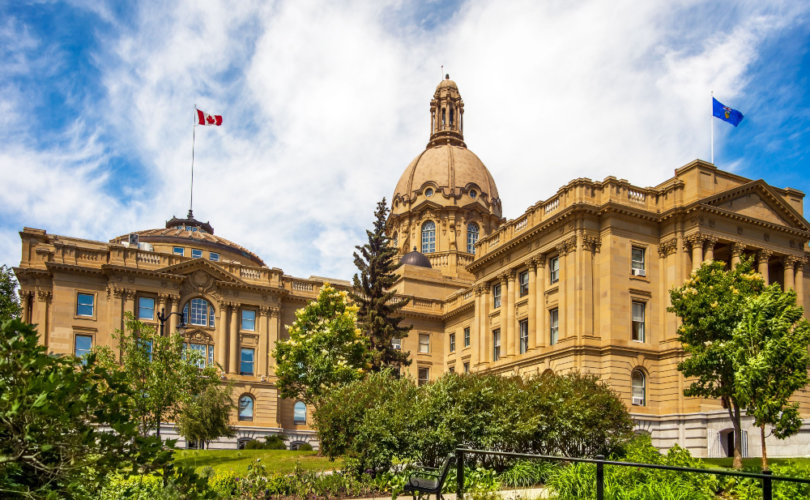 The leaders’ debate included only the top three candidates. Both Toews and Jean are MLAs of the United Conservative Party (UCP), and Smith is a former MLA and leader of the now-defunct Wildrose Party.

Toward the end of the debate, moderator Derek Fildebrandt, the publisher, president & CEO of the Western Standard, asked candidates their views on abortion.

Fildebrandt specifically asked candidates what they would do in support of life in the province, given that the previous NDP government in 2018 passed a law that banned pro-lifers from standing outside Alberta abortion facilities. Fildebrandt noted how the UCP at the time abstained from voting against the “bubble zone” bill, saying he was not going to be “playing games” on social issues.

Toews said in response to Fildebrandt’s question that “right off the bat, and I’m happy to say this every time I’m asked, my personal position on abortion, my personal view would put me in the pro-life camp.”

“I’m happy to legitimize that position every time I’m asked, but I recognize it’s a complicated issue and there’s passionate positions held by really good people, right across the spectrum,” Toews noted.

Toews received applause when he mentioned that he would expand conscience rights for doctors and nurses.

He added that he would also “further support expectant mothers.”

“Especially mothers who might find themselves with an unintended pregnancy, and I wouldn’t look to make adoption far more streamlined so that children who need a good home can find a good home with loving parents. That would be my approach,” Toews said.

Toews, a cattle rancher, served as Alberta’s Minister of Finance until June 2022.

Smith: Adoption should be promoted over abortion

Smith said that adoption is a better option and should be promoted over abortion when answering Fildebrandt’s question.

“I know that this is a very heated issue,” Smith said.

“And I don’t think that we find a solution where we can find some common ground by having these points of conflict like this. I have spent my whole career trying to find ways that libertarians and social conservatives can find areas that they agree on.”

Smith noted that “you’re dealing with a very sensitive issue of life.”

“The original promise,” Smith said, “was that abortion would be safe, legal and rare, and I would like to see us spend more time and effort in supporting women to make a different choice with adoption, and I think that’s the way that you unite.”

“There’s a lot of families I know one in southern Alberta who spent $50,000 doing a private adoption, if we can make sure that women know that there’s that option available and that’s a way that we can unite our choice movement in our life movement,” Smith said.

From 2009 to 2014, Smith served as the leader of the Wildrose Party, which for a time was the official opposition party in Alberta.

However, in 2014, Smith along with eight other Wildrose MLAs crossed the floor to join with the ruling Progressive Conservative Party under then-Premier Jim Prentice.

During Tuesday’s debate, Smith was blasted by her opponents for her floor crossing, which they said let the NDP getting elected. Smith offered her apology.

When it comes to social issues, Smith has a mixed track record. She describes herself as a Libertarian, and does seem to favor at least allowing abortion in the first few months of pregnancy, and she did throw her support behind same sex “marriage.”

Jean: Nothing will make one pro-life faster than losing a child

Jean, when it was his turn to answer Fildebrandt’s question, said the “number one priority as a government is to keep the public safe and public policy would be in this particular case, to not have conflict between two groups that have conflict on a constant basis.”

Jean then noted that he is “pro-life as well.”

“I lost a child, and I tell you if you want to be pro-life, that’s the situation that will make you pro-life,” Jean said.

“And I think that we should do exactly what these two people have said. I’ve come forward with a concrete plan on this. I’ve done adoptions. They take two years, three years, sometimes student adoption, which is everybody’s favorite, but why are we doing that? Why are we not providing more support for the people that are actually doing the adoptions?”

Jean said that the adoption process needs to be quicker and removed of red-tape barriers.

“Three months, let’s have a special judge so that I can get that done. I know how to get that done, folks. One special judge just like a surrogate judge that hears them, like these can be done over the phone. They don’t need to see them in person,” Jean said.

“We don’t have to wait for them to come. Let’s provide a safety net for young mothers. That’s where I want to focus. Let’s make sure that people have another option. They can finish school; they can go to work. They can do what they need.”

While Jean says he is pro-life, he has a history of supporting so-called “same-sex marriage.”

While Loewen was not part of yesterday’s debate, he was in the audience.

“Of the seven UCP Leadership contenders vying to replace Jason Kenney, one is a solid pro-lifer that we can wholeheartedly endorse,” CLC director of political operations Jack Fonseca wrote in a recent email.

Besides Loewen, the only other candidate in the running who seems to have irked the UCP establishment, unlike Jean and Toews, is Smith, a pro-freedom and anti-vaccine mandate candidate.

Smith has blasted Prime Minister Justin Trudeau’s divisive language against the vaccine free and has promised to allow for free votes on all matters for her MLAs.

She has promised that if she becomes premier she will introduce the Alberta Sovereignty Act, which she said will help make Alberta as independent from Ottawa as possible while still staying in Confederation.

The UCP will elect its new Party leader in October. For Albertans to be able to vote for the leader of the UCP, they need to be members of the party. Membership sales are open until August 12.