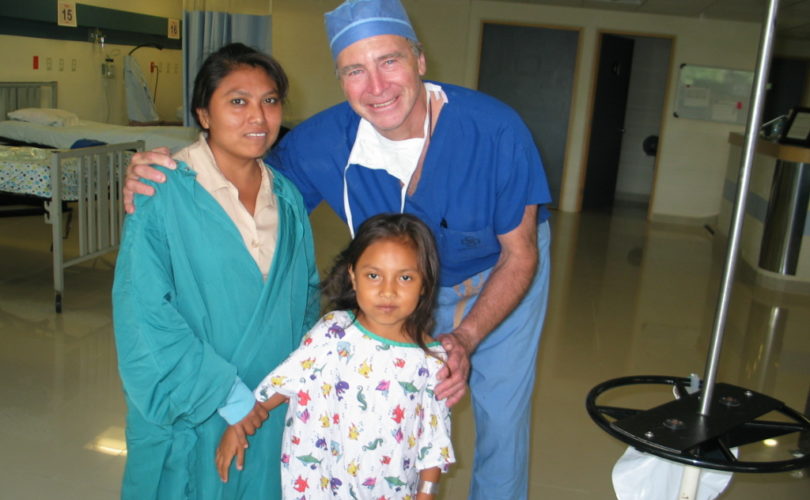 BOSTON, June 25, 2015 (LifeSiteNews) — A well-loved and respected doctor with a background in sexual-risk behaviors has been expelled from one of the United States’ most prestigious and top-ranked medical centers after he raised evidence-based health risk concerns over the center’s decision to endorse and celebrate the homosexual lifestyle.

Urologist Dr. Paul Church, a 65-year-old grandfather of 6, was expelled from Beth Israel Deaconess Medical Center (BIDMC) in Boston, Massachusetts, in March on the grounds that he had violated BIDMC’s “established standards of professional conduct” by using the center’s electronic information system “to communicate your unsolicited views about homosexuality that were offensive to BIDMC staff.”

“The MEC [Medical Executive Committee] has recommended imposition of disciplinary action, in the form of revocation of your appointment to the Medical Staff,” the March 30 letter of expulsion singed by BIDMC President and Chief Executive Officer Dr. Kevin Tab stated.

Church called the medical center “so indoctrinated with a worldview” supportive of the LGBTQ agenda that it sees this movement as “beyond reproach,” even to the extent of viewing someone as a bigot and culpable of misconduct charges for raising legitimate criticism about the center’s promotion of this movement and its activities.

“People who hear my story are flabbergasted, quite frankly, that this could happen. It's insane,” he told LifeSiteNews.

LifeSiteNews contacted BIDMC to comment for this story, but received no response by publication.

The medical center, which is also a Harvard Medical School Teaching Hospital, has been ranked for years as a “Best Hospital” by U.S. News & World Report and is described as “one of the nation's preeminent academic medical centers, committed to providing excellence in clinical care, teaching, research and community outreach.”

Dr. Church, a member of the Harvard Medical School faculty, has worked as a urologist at the center for nearly 30 years, conducting research on prostate and bladder cancer. He has also offered his medical talents to the poor on numerous occasions during volunteer missions to Mexico and Africa.

It was 11 years ago that Church began to experience censorship and suppression from BIDMC officials, reported Mass Resistance. At this time, Church and other like-minded colleagues repeatedly raised concern with officials over the center’s decision to not only endorse the homosexual lifestyle by hosting an annual “Lesbian, Gay, Bisexual and Transgender Achievement Award ceremony,” but to involve staff in LGBTQ events including participation in Boston’s annual “Gay Pride Week.”

“Life expectancy is significantly decreased as a result of HIV/AIDS, complications from the other health problems, and suicide. This alone should make it reprehensible to the medical community, who has an obligation to promote and model healthy behaviors and lifestyles.”

Church called it “all together inappropriate” for BIDMC to “endorse, affirm, or encourage the behaviors ‘celebrated’ by Gay Pride Week.”

“This action again jeopardizes the credibility of BIDMC as a healthcare institution and dishonors a large proportion of its community who continue to hold to the conviction that homosexuality is unnatural and immoral,” he wrote.

When Church realized his submissions were being systemically ignored by officials, he would occasionally post them on the center’s internal electronic messaging board.

In 2007, when Church once again responded to the center’s invitation to attend an LGBTQ-themed event, instead of addressing his concerns, the center’s president at the time, Paul Levy, posted excerpts of the complaint — with no names attached — on his own personal blog.

Despite the blog attracting a volume of readers who univocally vilified the urologist as a “bigot” for his “ignorant and hateful beliefs,” Levy felt compelled to point out in a response to one comment that Church’s “personal beliefs are not transmitted to patients and do not affect his treatment of patients who come to see him. I felt I should respect his statement, and, indeed, we have received no complaints that would indicate otherwise.”

Church began to experience intense heat from the medical center after he volunteered in May 2011 to appear in a BIDMC video titled Making it Better that was to highlight the center’s “culture of inclusion” by focusing on LGBTQ staff.

“I would be delighted to offer a view from the ‘other side’ and expound on the significant health risks posed by homosexuality and its high risk behaviors … seems especially appropriate for a healthcare institution,” he wrote in an email to organizers.

Two months later, Church found himself being investigated by the head of his department, Chief of Surgery Dr. Eliot Chaikof, on “harassment” charges on account of his offer to appear in the center’s LGBTQ promo video. Church was told he had “crossed a line” and was either facing suspension or having his staff privileges entirely revoked. He was given the option to voluntarily resign.

But Church refused to play their game, insisting he was innocent of all charges and that any action taken against him would be unwarranted. Church at this time brought in the pro-family legal group Liberty Counsel to strengthen his defense.

In September a Peer Review Committee of four academic physicians — specifically put together to examine Church’s conduct — met to discuss the doctor’s fate. Church was allowed to attend the second of two meetings where he outlined his position.

“This ‘investigation’ is not about patient care or my clinical interactions with patients or colleagues.  I have had a multitude of patients over the years who would identify themselves as gay, lesbian, and even transgender. My interactions with them have always been nonjudgmental, compassionate, and professional,” he told the committee.

“This investigation is also not about whether you agree with my worldview or convictions.  What it is about is a fundamental freedom of expression of dissenting ideologies and even more than that, it is about an illogical, inappropriate policy decision on the part of the medical institution that flies in the face of our greater mission of promoting healthy behaviors and lifestyles.”

Later that month, Church followed up with a letter to his department head thanking him for the opportunity to explain his concerns to “respected colleagues in medicine” instead of “non-physician administrators” unaware of medical facts.

“After all, our primary mission is the promotion of healthy behaviors and lifestyle choices, and to combat risks to public health, not endorse them. Truly caring for the well-being of individuals requires telling them the truth about their choices. The hospital does this on less controversial issues, such as smoking and diet,” he wrote.

But instead of siding with Church’s evidence-based concerns, the committee reprimanded him for violating the center’s policy against “harassment and discrimination in the workplace” and for sending what it called “inappropriate content” through the center’s internal electronic messaging board.

“Your opposition to diversity training and to BIDMC’s support for the annual Gay Pride Week events has been expressed in offensive terms and, at times, in a discourteous manner,” the committee stated in its November 2011 letter to Church.

The committee attempted to muzzle Church, warning him that if he did not immediately cease communicating in the workplace his “opinion about sexual orientation, homosexuality or other protected status” his staff privileges would be revoked.

In April 2012, Church requested that BIDMC’s communications department not send him further notices regarding LGBTQ activities. His request was ignored. Between 2013-14 Church continued to receive an ever-increasing number of emails and notices affirmative of the LGBTQ lifestyle.

To one such communication received in 2013 he responded: “Celebrating sexual perversions is highly inappropriate, especially in the context of a medical center that should be aware of the negative health consequences of high risk behaviors. It also ignores and dishonors the religious convictions and moral objections that many members of the hospital community share who are opposed to these behaviors.”

It is for these three responses that the medical center decided to take action this year and expel Dr. Church, despite colleagues and various pro-family organizations writing letters of support to the center on the doctor’s behalf.

Church told LifeSiteNews his case proves that what the LGBTQ movement wants is not simply “coexistence” with the rest of society, but total affirmation without a single voice of dissent of what the movement not only believes, but also what it practices in the bedroom.

“The medical center, peculiarly, seems more than willing to do that,” he said.

“What's happening here at the Beth Israel Deaconess Medical Center is that [top officials] have decided that it is an admirable thing to be promoting the activities of this group. And anyone who criticizes that viewpoint is obviously a troublemaker, a bigot, and a person who cannot be tolerated, no matter how sound and how reasonable that other point of view is.”

Church said he has never discriminated against any group of people. He has only raised evidence-based concerns with his colleagues about certain sexual behaviors and practices known to be associated with high rates of infection and disease because of his care for people and for their health.

“The point is that [homosexual practices and behaviors] are not harmless. There are considerable negative medical consequences [when engaging in these practices],” he said.

Brian Camenker of the Boston-based MassResistance praised Dr. Church for being willing to risk his whole medical career over his conviction that certain sexual practices are unhealthy and dangerous to those who engage in them.

“He has a lot to lose, but he’s not going to back down from telling the truth,” he told LifeSiteNews. “When a hospital tells somebody that you can’t tell the truth about serious health issues because it might hurt somebody’s feelings or that it’s not politically correct, that’s terribly frightening.”

“Health driven by ideology puts people at risk because we’re no longer talking about what is truly healthy, we’re talking about pushing a position that could be totally contrary to good health practices,” he said.

Church told LifeSiteNews that he is appealing the center’s decision, but has little hope of receiving justice, even knowing that legal counsel will be allowed to accompany him into any future hearing if his appeal is granted. He is thinking about taking the medical center to court.

“Medical institutions should be sounding a clarion call that these [LGBTQ] activities are potentially dangerous to your health. They certainly should not be affirming and endorsing these behaviors and acting like a propaganda tool,” he said.