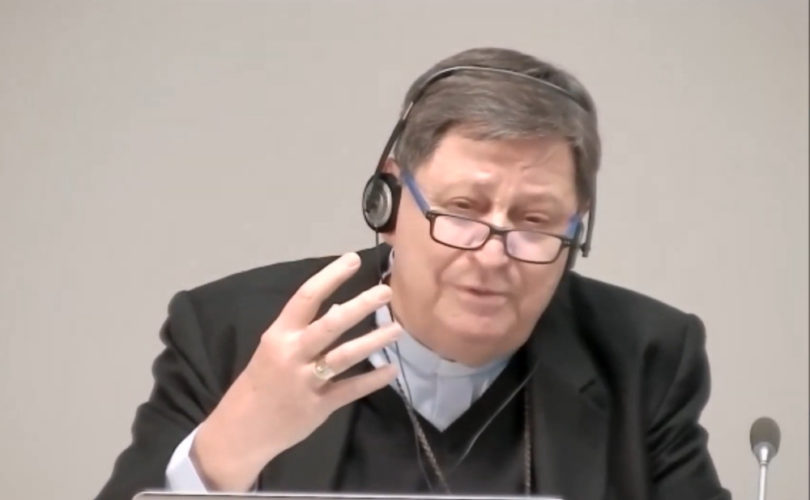 June 10, 2021 (LifeSiteNews) — The head of the Vatican Congregation for Institutes of Consecrated Life recently said Pope Francis is concerned about “traditionalist” ideas creeping into “priestly formation.”

Pope Francis has expressed fear of “a certain tendency to go a little far from Vatican Council II, taking up traditionalist positions” in “priestly formation,” according to Cardinal João Braz de Aviz, Prefect of the Congregation for Institutes of Consecrated Life and Societies of Apostolic Life, as reported by Vida Nueva Spain.

The May 17 discussion was part of a conference organized by the Theological Institute of Religious Life, which published notes explaining that the cardinal began by “commenting on the general principles of renewal of religious life expressed in the conciliar decree ‘Perfectae Caritatis’, signed by Paul VI in 1965.”

Dei Verbum, the Dogmatic Constitution on Divine Revelation, one of the key documents of Vatican II, exhorts the faithful to receive the ‘teaching, life and worship the Church perpetuates and hands on to all generations.’ (DV 8). It is therefore ironic that Pope Francis should take a hostile position towards traditionalist seminarians when such ‘rigidity’ is advocated as essential by Dei Verbum. In failing to emphasize the importance of the faithful ‘holding fast to the traditions’ and fighting in ‘defence of the Faith handed on once and for all,’ it is Pope Francis who is displaying a ‘certain tendency to go a little far from Vatican Council II’, not the seminarians and priests who uphold Tradition.

The expressed concerns of Pope Francis with traditional priestly formation appear to echo comments he allegedly made to Italian Bishops at the opening of their General Assembly on May 24, according to an unsigned article published by “Messa in Latina.” In this case, he is said to have zeroed in specifically on the Traditional Latin Mass.

“After once again warning against accepting ‘rigid’ (that is, faithful to doctrine) young men into the seminary, Francis told the bishops that he had reached the third draft of a text that contains measures restricting the celebration by Catholic priest of Mass in the Extraordinary Form made accessible by Benedict XVI,” Messa in Latina reported.

During the May 17 discussion, Braz de Aviz emphasized the importance of the fidelity of consecrated religious to the thought of Pope Francis, saying, “following Christ also entails having a vision of faith regarding Peter and his successors. How to live a consecrated life today without listening deeply to the guidelines of Pope Francis? Only in this way does it make sense to follow the founder.”

The cardinal continued, saying that we must “update our following of Jesus” using the “indispensable criteria” of “synodality and fraternity.”

Among the “fields that need this renewal, this new formation” is that of “the man-woman relationship,” according to Braz de Aviz. He then alluded to ideas common to Catholic theology and culture before the Second Vatican Council that he considers undesirable.

“Our models of life as consecrated, our organizational and governmental structures created in the past a mentality in which the differences between man and woman were accentuated, in such a way that the awareness of this equal dignity and complementarity was lost.”

“Consecrated women were also placed on the margins of the life of the Church, pastoral care and her mission. Things began to change with Vatican Council II.” Even so, according to Braz de Aviz, “the process of maturation in man-woman reciprocity still needs to grow.”

During his discussion with Kafka and Sosa, he also insisted that “it’s time to reform our way of thinking, above all, on our path of formation,” adding, “There is no longer room for a static formation, which is done once and for all.”

Braz de Aviz shares Pope Francis’s antipathy to traditional Catholic positions, to the point of having described traditionalists as “killing themselves.” During a 2015 speech at a “first-of-its-kind congress of many of the world’s religious formation directors” in Rome, Braz de Aviz warned them, “Do not distance yourself from the great lines of the Second Vatican Council.”

“In fact, those that are distancing themselves from the council to make another path are killing themselves — sooner or later, they will die,” Braz de Aviz said. “They will not have sense. They will be outside the church. We need to build, using the Gospel and the council as a departure point.”

The National Catholic Reporter related that he “told the formation directors that they must know that the needs of people considering religious life in today’s age “are not the same” as when the founders of their orders first received their charism: “These contexts have changed.”

The very idea that holding “traditionalist” Catholic positions puts one at odds with Vatican II is consistent with the notion that Vatican II marked a rupture from the Catholic faith as it was taught and practiced by the saints and faithful of the ages.

Church prelates such as Archbishop Carlo Maria Viganò and Bishop Athanasius Schneider argue that this “hermeneutic of rupture” results not because Vatican II elucidated Church teachings that previously weren’t understand, nor merely because Vatican II has been misinterpreted, but because of problems inherent to the council that render it incompatible with Church magisterial teaching.

Archbishop Viganò, who is one of the most outspoken living critics of Vatican II, has traced today’s scandalous offenses against the faith committed by high-ranking clergy to Vatican II, saying that “the present crisis is the metastasis of the conciliar cancer.”

“If the pachamama could be adored in a church, we owe it to Dignitatis Humanae. If we have a liturgy that is Protestantized and at times even paganized, we owe it to the revolutionary action of Msgr. Annibale Bugnini and to the post-conciliar reforms. If the Abu Dhabi Declaration was signed, we owe it to Nostra Aetate,” said Viganò.

Even among the clergy who accept or embrace the Second Vatican Council, there are a great number who insist that the council does not and cannot mean a repudiation of traditional Church teaching and practice.

He addressed what he calls an “anti-Tridentine Complex,” writing, “The Tridentine theology mainly in Latin saved the faith of the Church of the [laity], and the Tridentine liturgy in Latin with the Gregorian chant (including the ‘dies irae’) nourished the piety of generations and sustained the courage of innumerable martyrs.”

“It sounds blasphemous to say that Vatican II had to clean the Church of the Tridentine ‘dirt,’” he added.

The words and actions of prelates like Braz de Aviz, and the new Prefect of the Congregation for Divine Worship, Archbishop Arthur Roche, indicate that cleansing the Church of traditional doctrine and liturgy is indeed part of their agenda. For example, Roche penned a letter last year to the bishops of the world attacking the traditional Mass and praising the Second Vatican Council’s paradigm shift in its view of the Church.

Some argue that it is Braz de Aviz’s aversion to tradition that led to his “ruthless” dismantling of the Franciscan Friars of the Immaculate (FFI), a community celebrating the Traditional Latin Mass, albeit not exclusively, as well as of the Little Sisters of Mary, Mother of the Redeemer. In 2018, he sent the sisters an ultimatum requiring them to accept Sr. Geneviève Médevielle as their authority “without reserve” or face dismissal from the Institute. Médevielle does not wear a habit and defended the controversial postsynodal Apostolic Exhortation Amoris Laetitia. The great majority of the sisters were relieved of their vows as a result.

In both cases, the communities were not given any specific reason for the imposition of commissioners that preceded their disbanding, except vague hints that they were too “traditional” for the tastes of the Vatican authorities, including, presumably, Pope Francis, who in the case of the FFI, had refused to accept appeals from the orders’ members.