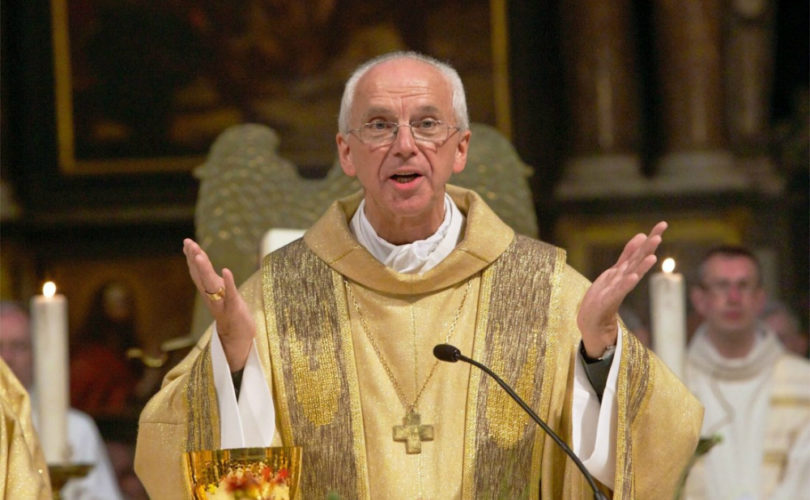 January 10, 2020 (LifeSiteNews) — Looking back on 2019, Cardinal Jozef De Kesel of Mechelen-Brussels finds that the most important events of that year centered on the environment and immigration, with some treatment of abortion, atheism, and the Amazon Synod included. In a 3,000 word interview with the official Catholic website of French-speaking Belgium, cathobel.be, he described the commitment of young people who “demonstrated for the safeguarding of our planet” as what he will retain “on the positive side.”

Most of his concerns appear to be primarily social. As a former protégé of Cardinal Danneels, former archbishop of Brussels and very close to Pope Francis, De Kesel has clearly chosen to follow in Danneels’s footsteps.

Jozef De Kesel was named primate of Belgium at the end of 2015 by Pope Francis, bringing a whole new orientation to the diocese of Brussels, where his much more traditionally minded predecessor, Mgr. André Léonard, had never received the cardinal’s hat associated with that see. De Kesel was created a cardinal less than one year after having succeeded Léonard.

Since then, he has made a number of statements favorable to Communion for the divorced and “remarried,” in line with Amoris Laetitia, and (according to a homosexualist magazine) to LGBT couples in relationships where “stability and faithfulness take the central place.”

De Kesel was interviewed at the beginning of this month by Vincent Delcorps, of the press service of the Belgian Bishops’ Conference, in order to present his personal retrospective on the year that just ended.

Fighting “for the planet” was the first issue that came to his mind:

Two thousand nineteen was an important year for ecology, especially thanks to these young people who succeeded in mobilizing public opinion. Today we are really aware of the problem, it has become difficult to deny it — even if COP 25 in Madrid was not a great success[.] … This challenge concerns everyone and requires us to work together. For Europe, which is a bit lacking in perspective, this is a great project! But Europe also needs to work with other partners in the world[.]

The young people’s demonstrations were orchestrated around the personality of Greta Thunberg, the Swedish adolescent suffering from Asperger’s syndrome who is being touted as the figurehead of youthful anger against adults’ mismanagement of Mother Earth. It was she who launched the Friday strikes for the climate, where youngsters of school-age lay down pens and leave their classrooms in order to change the world.

Farther along in the interview, Cardinal De Kesel returned to his ecological concerns in commenting on the Amazon Synod, making clear that the Catholic dimension (if any…) of the event needed to be relegated to the background. He said:

In the West, the synod was mainly talked about in connection with the issue of priestly celibacy. But the synod was not primarily convened to discuss this subject, but to deal with an ecological issue that is important for Latin America and the whole world. I would like to add that ecological and social issues are linked: when big companies exploit the land for their own profit, they also exploit the poor! With this synod, therefore, the Church has sent out a strong ecological and social signal. I regret that the press did not report more about it.

Among other things that concerned him in 2019, De Kesel spoke about the present abortion debate in Belgium, where efforts are being made to liberalize the current law.

“I note that there was a desire to pass a new abortion law as soon as possible. Today, even politicians are a little more cautious. I am glad about that, because on such issues, we need a societal debate. In the press, many people, particularly those working in the care sector, have spoken out,” he said.

The cardinal was referring in particular to a statement made in November by more than 700 doctors, midwives, nurses, and psychologists who signed a call to parliamentarians not to prolong the term of legal abortion from 14 to 18 weeks. Some days later, 1,500 doctors and medical personnel stated the opposite. Is it right to have “debates” on the period when killing an unborn child is legal?

De Kesel, speaking to — one supposes — a Catholic journalist in the official media of the French-speaking bishops of Belgium, entered into the debate. He said:

The period within which an abortion can be carried out is not a trivial matter: there is a big difference between twelve and eighteen weeks. At eighteen weeks, the operation is much more burdensome for both the woman and the doctor.

His half-hearted condemnation of abortion as such followed: “Furthermore, it should be remembered that abortion is always a failure and will never be an ordinary medical procedure.” A failure? Or an “abominable crime,” as the Second Vatican Council called it?

Did the bishop have other special memories of 2019?

Yes, he did. “The Brexit. Not as such, but because it reveals a tendency to withdraw into oneself. This is a trend that can be found in several European countries, but also in the United States and Russia.” In the line of bridges, not walls, Cardinal De Kesel stuck to his sociopolitical discourse, regretting that “in the face of the many challenges of our world, fear sets in: fear of the other, of the migrant, of the foreigner.”

This became even clearer when the cardinal spoke of the “hope” society needs — not the hope of Redemption, nor the joy of the truth, but the hope of combating poverty, “the call for greater solidarity.”

In a clear return to the horizontalism of the post–Vatican II years, De Kesel spoke first and foremost of politics and the role of politicians:

I believe that if we want a society where young people can find hope, we must take this into account in the way we govern the country. One example: in the 1980s, Margaret Thatcher said that there was no such thing as society, that there were only individuals. If we follow that logic, it means that everyone must be responsible for themselves. That is the logic of individualism.

This, by the way, is a traditional leftist misquoting of Margaret Thatcher. When the former prime minister of the United Kingdom was pleading against relying on the government for everything, she said: “I think we have gone through a period when too many children and people have been given to understand ‘I have a problem, it is the Government’s job to cope with it’… and so they are casting their problems upon society, and who is society? There are individual men and women and there are families, and no government can do anything except through people and people look to themselves first. It is our duty to look after ourselves and then after our neighbour … and people have got the entitlements too much in mind without the obligations.”

She went on to insist that “there is no such thing as society,” in the sense that society is not responsible for all that is evil, and that people, especially families, should first have a sense of their own obligations and to care more for their neighbors. Her famous speech was a plea for the strengthening of social institutions such as families, churches, schools, and charitable and other voluntary associations.

De Kesel, on the other hand, clearly pleaded for more government involvement, higher and higher up, as when he suggested that Europe should take up a fight against climate change as an entity and invite the rest of the world to join in.

When asked during the course of the interview how hope can be restored, Cardinal De Kesel once again evaded the specifically Catholic response by saying:

On Sundays, when I comment on the Gospel, I always try to show how our Christian faith commits us to a more just society. We are not going to give hope to young people just by minimizing their problems. We must actively work towards building a more fraternal society. And here again, the role of politicians is important. Politicians must not only act in accordance with public opinion; they must also try to shape public opinion. We need leaders who can say things we don’t necessarily want to hear. Politicians are not serving their own party, but the common good!

De Kesel does not want to see churches looking after only their own affairs. “I am fighting against the privatization of religion,” he assured, adding: “As much as I fully respect atheism I do not find serious this desire to confine religions to the private sphere.” A Catholic cardinal who respects atheism as such — and not the persons who might profess it — is a strange thing, indeed.

Responding to a question about the dearth of priests in Belgium, where over half of the diocesan priests are now over 75 years old, De Kesel recognized that “the Church has already been changing a lot,” in particular regarding the role of the laity and of permanent deacons.

Regarding the role of women, he said: “On this subject we must continue. The Church should become more involved[.] … Women must be given greater responsibilities.”

“Is that what you want?” insisted Vincent Delcorps.

“Well, we’ll see. There are theological but also cultural elements: that’s not forget that the church is present on every continent,” said De Kesel. Reading between the lines, it appears that in his opinion, what is holding the Church back from ordaining women is the opposition of certain (more backward?) continents.

Of the ordination of married men, De Kesel said the following:

That question has matured. Now we have to think about it. Obviously, it is not a question of suppressing the celibacy of priests: we are not going to ask priests to marry! On the other hand, if I meet a married man, a convinced Catholic, theologically well formed, who has already exercised responsibilities, I cannot exclude the possibility that the Lord may call him to the priesthood! I add that the married priest already exists in the Catholic Church. In my seminary there is a twenty-eight year old, married and father of two children. He belongs to the Chaldean community, but he was born in Mechelen, and he will be a priest in our archdiocese. That makes me happy! So things are changing[.]

Finally, De Kesel was questioned about Catholics who do not go to Mass on every Sunday. Having told the interviewer that it is also necessary “to welcome those who come from time to time,” Delcorps asked: “So you don’t have to go to Mass every Sunday to be a Catholic?”

Once again, the answer was a “feel-good” one, confused enough to make everyone feel happy. The cardinal said: “Going to Mass is very important. If a Christian wants to live his faith, he must nourish it. That’s why I can’t say that someone who doesn’t come every Sunday is not Catholic[.] … I don’t have the right to say that someone is not Catholic. We must be welcoming! When people come to church, they must feel welcome, especially when preparing for a wedding or a funeral. These can be moments of grace. The most important thing is the authenticity of the meeting.”

If a cardinal of the Catholic Church cannot say someone who does not believe the truths taught by her and does not follow her commands is not Catholic, then who can?