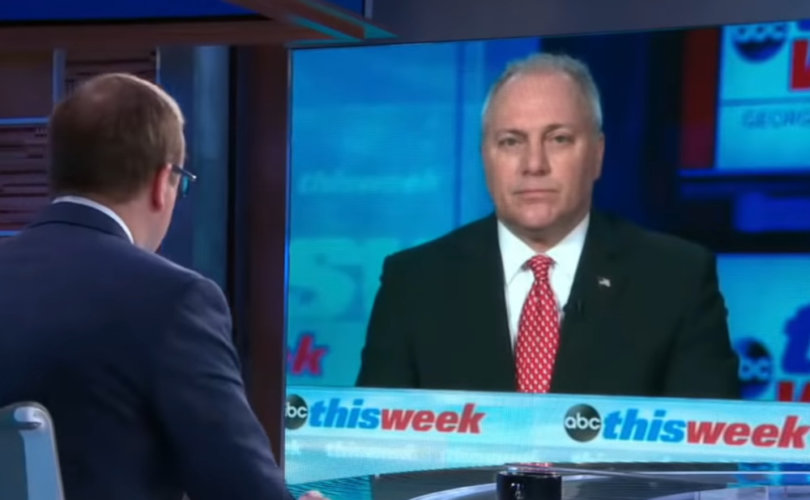 Scalise, who voted against certifying the election in January, pushed back against ABC News host John Karl’s claim that Democrats’ win last year was “legitimate,” pointing out that several states broke election laws.

“But clear this up for me. Joe Biden won the election,” Karl said. “The election was not stolen, correct?”

Although Scalise said that he accepted the congressionally-approved Biden inauguration, he declined to say that the election was not stolen, noting that “[t]here a few states that did not follow their state laws.”

“Either we’re going to address the problems that happened with the election that people are still — millions of people are still concerned about — the Constitution says state legislatures set the rules for elections.”

“That didn’t happen in a few states,” Scalise stressed.

Despite the left’s militant insistence that America had an unquestionably “free and fair” election in November, judges have found that Democrats’ wave of 2020 election rule changes repeatedly violated state statutes and the Constitution.

Some key cases still remain active, like one that would decide whether Boockvar and her colleagues also broke the law when they unilaterally extended Pennsylvania’s ballot deadline. Multiple Supreme Court justices have affirmed that those and other changes were likely illegal, as Justice Clarence Thomas argued in a powerful dissent yesterday.

“The Constitution gives to each state legislature authority to determine the ‘Manner’ of federal elections,” Thomas wrote, referring to Article 1, Section 4, and Article 2, Section 1, of the Constitution. “Yet both before and after the 2020 election, nonlegislative officials in various States took it upon themselves to set the rules instead.”

“If you read the founding documents of our country … each state has a process for selecting their electors and sending them to Washington,” Scalise said in his viral January 6 objection speech on the House floor.

Watchdog groups also have raised concerns about state and local officials’ acceptance of hundreds of millions of dollars in election funds from Facebook CEO Mark Zuckerberg, possibly flouting federal statutes, according to the Amistad Project.

As Scalise pointed out on Sunday, tens of millions of Trump voters continue to reject the premise that the 2020 election was conducted fairly, and they demand a return to the rule of law.

“I think that’s the biggest frustration many people have, is, those states that didn’t follow the law, are they going to keep doing that in the future, or are we going to finally get back to what the Constitution calls out for electing our leaders?” Scalise said during Sunday’s interview.

“[T]hat’s the issue at heart, that millions of people still are not happy with and don’t want to see happen again,” he said. “Are we going to finally get back to the way the rule of law works?”

State lawmakers in more than two dozen states have begun an apparent blitz of election reform, introducing more than 100 bills to boost voter integrity this session. The Republican State Leadership Committee also recently announced a new election reform commission “to restore the public’s confidence in our elections,” as one co-chair said.