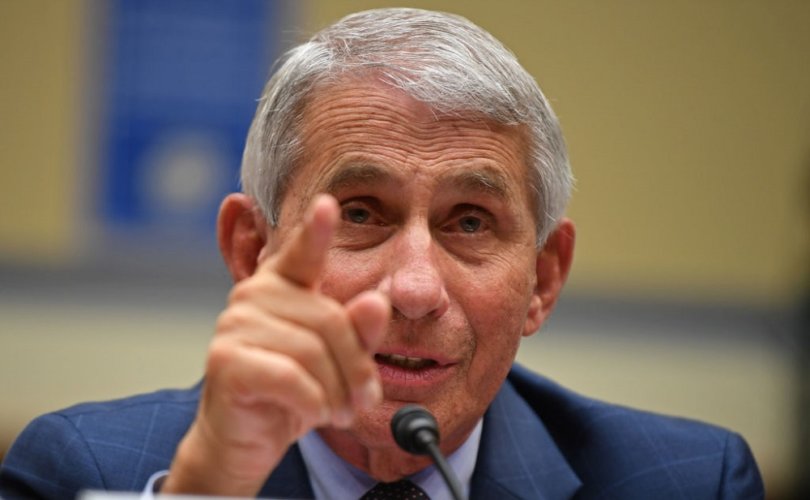 (WND News Center) – The mockery and censorship of the theory that the world-changing, novel coronavirus was engineered in a Chinese lab was fueled largely by a letter published in a prestigious British medical journal by a scientist with a clear conflict of interest.

The organizer of the February 2020 letter in The Lancet was Peter Daszak, a British zoologist who received funding from Dr. Anthony Fauci’s agency to help the “bat lady” researcher at the Wuhan Institute of Virology manipulate coronaviruses in animals and make them transmissible to humans.

Now that the circumstantial evidence is pointing to the theory that the pandemic began with one of those engineered viruses leaking from the lab, The Lancet is chastising Daszak and the 26 other scientists who signed his letter.

Daszak’s letter early in the pandemic stated: “We stand together to strongly condemn conspiracy theories suggesting that COVID-19 does not have a natural origin.”

On Friday, however, the journal published a letter from 16 scientists calling for another look at the evidence, saying the February 2020 letter and a subsequent one by the same group had “a silencing effect on the wider scientific debate, including among science journalists.”

In “An appeal for an objective, open, and transparent scientific debate about the origin of SARS-CoV-2,” the 16 scientists argue scientific journals “should open their columns to in-depth analyses of all hypotheses.”

“As scientists, we need to evaluate all hypotheses on a rational basis, and to weigh their likelihood based on facts and evidence, devoid of speculation concerning possible political impacts,” they write.

“More importantly, science embraces alternative hypotheses, contradictory arguments, verification, refutability, and controversy,” they continued. “Departing from this principle risks establishing dogmas, abandoning the essence of science, and, even worse, paving the way for conspiracy theories. Instead, the scientific community should bring this debate to a place where it belongs: the columns of scientific journals.”

Earlier this month, DailyMail.com reported that of the 27 scientists who signed the letter dismissing the Wuhan lab origin, 26 have links to its Chinese researchers, their colleagues or its benefactors.

In an interview Monday with Steve Bannon’s “War Room,” former Trump trade adviser Peter Navarro recalled that The Lancet last year also published a negative study on hydroxychloroquine that was deployed to quash the use of the drug in treating COVID-19. The journal later had to retract the study, with three of the four authors issuing an apology in which they cited concerns about the quality and veracity of the data.

Navarro – who said he had numerous run-ins with Fauci while working in the White House – said both The Lancet and establishment media are in “CYA” mode, trying to cover for themselves.

“They are legally liable for all of the propaganda they pushed to try to defeat Trump, whether it’s on the origins of the virus or hydroxychloroquine,” he said.

Daszak to Fauci: Thanks for helping ‘dispel the myths’

Two months after Daszak published his letter in The Lancet, he emailed Fauci to thank him for “publicly standing up and stating that the scientific evidence supports a natural origin for COVID-19 from a bat-to-human spillover, not a lab release from the Wuhan Institute of Virology.”

“From my perspective, your comments are brave, and coming from your trusted voice, will help dispel the myths being spun around the virus’s origins,” Daszak wrote April 18, 2020.

Fauci, according to emails obtained earlier this year through a Freedom of Information Act request, had been told by a top virologist in late January that the novel coronavirus may have been “engineered.”

But he replied to Daszak’s April email with, “Many thanks for your kind note.”

After reporting by alternative media over the past year, the lab-leak theory gained traction in early May when Nicholas Wade, a former New York Times science writer, published a nearly 11,000-word analysis concluding the circumstantial evidence clearly points to a lab leak.

The Wall Street Journal later reported three researchers at the Wuhan lab were hospitalized with possible COVID symptoms in November 2019, when the outbreak in the city of 11 million began.

Fauci’s repeated insistence that the agency he leads never funded dangerous gain-of-function research at the Wuhan lab was further undermined earlier this month by the release of government documents reported by The Intercept.

Richard Ebright, who was among the 16 scientists who authored the letter published Friday in The Lancet, said the documents “make it clear that assertions by the NIH Director, Francis Collins, and the NIAID Director, Anthony Fauci, that the NIH did not support gain-of-function research or potential pandemic pathogen enhancement at WIV are untruthful.”

Ebright is a molecular biologist at Rutgers University.

Daszak, in a 2016 speech, boasted his “colleagues in China” were creating a “killer” coronavirus.

In June, he was dismissed from the U.N.-backed The Lancet COVID-19 Commission investigating the pandemic’s origin, apparently due to his conflict of interest.

Earlier this year, Daszak was the sole U.S. representative on a World Health Organization fact-finding mission to Wuhan that concluded the virus likely emerged from animals. But the researchers didn’t examine the lab, accepting the communist government’s word that there was nothing to see. And even WHO’s director general criticized the probe.

The Lancet COVID-19 Commission issued a statement on the homepage of its website in June addressing the journal’s publication of Daszak’s letter in February 2020.

The journal said it had invited all 27 signatories to “re-evaluate their competing interests.” The statement included an updated disclosure from Daszak stating that EcoHealth’s work at the Wuhan lab was funded by the U.S. National Institutes of Health – the umbrella over Fauci’s NIAID – and the U.S. Agency for International Development, known as USAID.

‘There will be responsibility for those who funded the lab’

In July, Sen. Rand Paul, R-Ky., sent a criminal referral to the Department of Justice accusing Fauci of lying to Congress about his role in funding research at the Wuhan lab.

In a Senate hearing on July 20, Paul warned Fauci that “there will be responsibility for those who funded the lab, including yourself.”

“I totally resent the lie that you are now propagating, senator.” Fauci shot back.

“He’s lying and he needs to be held accountable,” he said.

In May, Paul said in an interview that while there’s no hard proof yet regarding the origin of the COVID-19 pandemic, it was becoming clearer that Fauci “could be culpable for the entire pandemic.”

However, in May 2017, Americans scientists who had received grants from Fauci’s NIAID headlined a conference hosted by the Wuhan lab focusing on “gain of function research and gene editing.”

Fauci is seen on video at a January 2018 NIAID Advisory Council meeting announcing the reinstatement of gain-of-function research and defending its use.