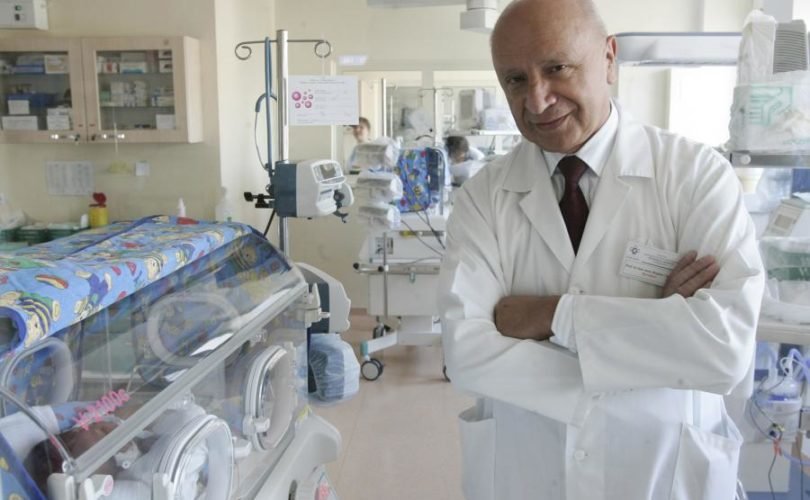 Dr. Chazan says he regards the fine and damage to his career as nothing more than “a ransom for the life of the child,” which he was happy to pay.

A renowned pro-life doctor and head of the gynecology and obstetrics department at a major hospital, has been sacked and his hospital fined for refusing to participate in abortion. Dr. Bogdan Chazan was removed from his position as professor and head of gynecology and obstetrics at Holy Family hospital in Warsaw when he refused to help a woman obtain an abortion for her unborn child who suffered from brain malformations.

The hospital was fined 70,000 zlotys (about €17,000) by the Mayor of Warsaw, Hanna Gronkiewicz-Waltz, who told a press conference that the action was taken against Dr. Chazan because he not only refused to do the abortion, but refused to tell the mother how she could obtain the abortion. He is also accused of having deliberately prolonged a diagnostic procedure in order to prevent the abortion that, to be legal, had to be carried out before the child was at 25 weeks gestation.

Dr. Chazan, who has been head of ob-gyn services at Holy Family since 2004 and has served in health programs of the World Health Organization and the Council of Europe, the UN and the Polish Ministry of Health, immediately tweeted his simple response when the news broke on Wednesday: “I was dismissed. [But I] do not stop believing in what I do.”

Later he told a television interviewer that he regarded the fine and damage to his career as nothing more than “a ransom for the life of the child,” which he was happy to pay.

The Sunday Visitor quoted Dr. Chazan saying, “This decision today is the beginning of the attack on the conscience of doctors and persons holding managerial positions in health care, breaking the consciences of those who follow the rules of natural law, and above all do not agree with killing a man.”

It will “probably cause the elimination of doctors from management positions – those just following the principles of natural law,” he said.

Dr. Chazan is also a prominent signatory of the Declaration of Faith, a statement signed by 3,000 physicians who refuse to participate in abortion or prescribe artificial contraceptives. The signatories represent about 1% of Poland’s 377,000 doctors.

Polish media reports that the woman gave birth to her child, who was conceived through in vitro fertilization and who later died of severe brain malformations. The woman’s lawyer, Martin Dubieniecki, said in a statement that she is seeking compensation for damages. She is now suffering from depression brought on by “the trauma of childbirth, which, with so numerous and severe damages of the [child’s] body, should not have been born,” Dubieniecki said.

The news has triggered an international frenzy of coverage, with politicians and abortion advocates praising the decision of Mayor Gronkiewicz-Waltz. First among these was a statement from Prime Minister Donald Tusk who said, “Regardless of what his conscience is telling him, [a doctor] must carry out the law.”

Professor Chazan’s lawyer, Jerzy Kwaśniewski, however, has said that the action taken against his client has assumed his guilt before the evidence has been presented. He said the hospital did in fact inform the mother about the possibility of abortion. “At the Hospital of St. Families patient’s rights were protected adequately and fully implemented the statutory obligation to provide information.”

According to the documentation, he said, the patient’s regular doctor, Dr. Maciej Gawlak, had informed her early in the diagnostic procedures that she could be eligible for abortion under the country’s laws that allow it for fetal abnormalities. Kwaśniewski said that the woman expressed no interest in abortion at that time. The woman went on to be examined at other medical facilities where she was denied the abortion, he said.

Warsaw’s inspectors are investigating, and have said they found weaknesses and errors in the internal documentation of the hospital and patient medical records. Polskieradio said their report will be forwarded to the prosecutor’s office that is investigating the charge of exposing a patient to “direct danger of death or serious bodily injury.”

The Polish legal institute, Ordo Iuris, has issued a legal analysis of the mayor’s action, calling it unconstitutional, nothing that “the rules of ethics require the exercise of medical care for both the mother and the child, the child located at the prenatal stage of development.”

“In this case, the doctor has two patients – mother and child. Diagnosis of the child must be carried out until the child is alive. The purpose of diagnosis is not finding evidence for abortion; its purpose is first aid, including support for the child, even if it may die soon after birth.”

The institute also called for a thorough investigation into other aspects of the case, such as the circumstances of the baby’s conception at the hospital’s IVF clinic, to establish whether the mother was informed of the heightened risk of fetal deformities in IVF conceived babies.

Archbishop Henryk Hoser of the Warsaw-Praga Diocese, a medical doctor, issued a statement in support of Dr. Chazan, calling the penalties “ethically unacceptable, unjustified, out of proportion, unjust, absurd and legally doubtful.”

“A child in the prenatal phase, does not cease to be a human being or a patient, regardless of his health condition or anybody's discretionary decision. Nobody is a master of another person's life and all other personal goods come second to the fact of the existence of a human being,” the archbishop wrote.

He encouraged other doctors and people of good will to manifest their support and solidarity with the professor, and noted that while the authorities and law enforcement are usually slow in prosecuting serious crimes, they are being “overzealous in investigating the allegation of isolating a patient from information [on where to obtain an abortion] which is easily accessible to all, especially in a city like Warsaw.”

Archbishop Hoser’s statement was followed by one from Cardinal Kazimierz Nycz, archbishop metropolitan of Warsaw, who called the right of the exercise of conscience, “one of the basic human rights” and said the decision to fire Dr. Chazan is “a dangerous precedent, violating the rights of all people, not just Catholics.”

To contact the office of the Mayor of Warsaw with concerns by email: [email protected]