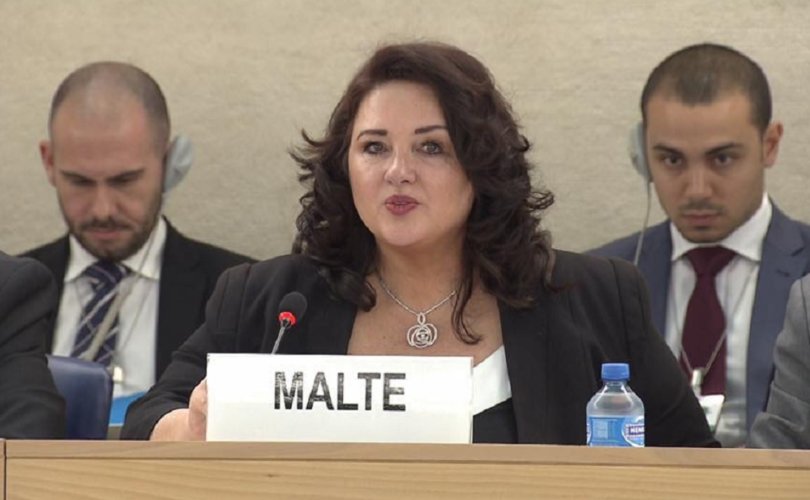 October 8, 2019 (LifeSiteNews) — Helena Dalli, a leading Maltese politician and member of the country’s governing Labour Party, has promised the European Parliament that there will be full access in Malta to “sexual reproductive rights without exception.” Most forms of abortion are currently illegal in Malta, a small Catholic country, although contraceptives are allowed, including some that can act as abortifacients.

Ms Dalli made her remarks on October 2 while responding to questions from members of the European Parliament in her capacity as the new EU equalities commissioner-designate.

Ms Dalli was challenged about abortion in Malta by Irène Tolleret, a French MEP and member of the Committee on Women’s Rights and Gender Equality (FEMM).

The full recording of the question and answer can be viewed on the European Parliament’s website.

Earlier this year, groups in Malta campaigned to enshrine the right to life in the constitution of Malta. The Christian political party Alleanza Bidla (Alliance for Change) sought to secure a pledge from Maltese political parties that they would add the words “from conception” to article 33 of the constitution. The article currently reads:

No person shall be intentionally deprived of his life save in execution of the sentence of a court in respect of a criminal offence under the law of Malta of which he has been convicted.

Several Maltese parties committed to the pledge, but the governing Labour Party refused to sign it.

In an exclusive statement to LifeSiteNews, Ivan Grech Mintoff, former co-leader of Alleanza Bidla and founder of the Facebook group “Abortion In Malta? Not In My Name!,” which has over 23,000 members, said:

When asked to give a written commitment before the last MEP elections in May that abortion will not be legalised in Malta, the Maltese PM did not do so despite being asked to do so by our group of 23,000 members. Instead he chose to sign the Socialists’ and Democrats’ charter, which pushes for ‘female reproductive rights’ to be available in all EU countries. He expected us to rely on his word only when he has not kept it on many important issues in the past. Today, our fears have been proven to be completely justified and correct. Our push to have the Constitution amended so that abortion never enters Malta has been validated and is more important than ever before.

Ms Dalli recently received a public endorsement from the Maltese prime minister, Joseph Muscat, who said in a tweet that Ursula von der Leyen, the president-elect of the European Commission, had made the “perfect choice” in selecting Ms Dalli for the role of “implementing an ambitious equality agenda.” Dalli played a key role in Malta’s legalization of both same-sex civil unions in 2014 and so called “same-sex marriage” in 2017.