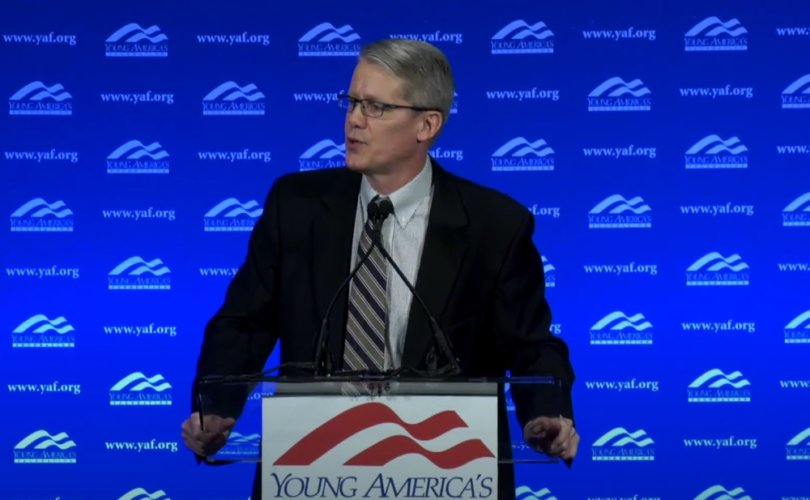 Police are investigating the death of Mike S. Adams, the tenured University of North Carolina-Wilmington professor who became a lightning rod for left-wing hate after posting a series of tweets his critics claimed were sexist and racist.

According to CBS, deputies from the New Hanover County Sheriff’s Office found Adams’ body after coming to his Wilmington home to do a “wellness check.” Adams, 55, was to take early retirement from UNCW on August 1, having been forced out by an administration under siege by left-wing protests demanding his firing. The professor of sociology and criminology had reached a settlement of $504,702 from the university for lost wages and benefits.

Critical of Governor Roy Cooper’s lockdown orders, one of Adams’ most controversial tweets stated that the universities should stay open but that non-essential majors, like Women’s Studies, should go. A May 30 tweet addressed the governor as “Massa Cooper,” a reference to the slave-“owner” relationship in the antebellum South, and described North Carolina under lockdown as a “slave state.”

“This evening I ate pizza and drank beer with six guys at a six seat table top. I almost felt like a free man who was not living in the slave state of North Carolina,” he wrote. “Massa Cooper, let my people go!”

The remarks supporting or condemning the tweet have now been joined by tweets celebrating Adams’ death.

Oh this is terrible news. @MikeSAdams was smart, brave, always cheerful & a gentleman of great faith. In shock. We always vowed to do the #manitouincline together and never did. I’m heartsick. https://t.co/2XTAQIr5tc

Unlike so many phony champions of free speech, @mikesadams was the real deal. He faced enormous campus pressure to conform. Defied #CancelCulture —and pushed back not only against the Left, but also gatekeepers of the Right. He was a strong & gracious Christian. Gone too soon.

“Mike wasn’t just a free speech warrior; he was a free speech general,” wrote the students of UNCW’s YAF chapter. “Every conservative student at UNCW owes Mike Adams a debt which we can only hope one day to repay.”

Today is a sad day at our little chapter. Our dear and beloved advisor and mentor, Mike Adams, has passed away. Below is our statement, YAF at UNCW will never be the same. pic.twitter.com/el7xCjiud8

One of Adams’ last essays for Town Hall revealed that he had a long history of criticizing Governor Cooper. In his May 4, 2020 essay, entitled “Why I Can’t Get Arrested in Raleigh,” Adams referred to a personal legal battle with Cooper. Explaining why Raleigh police wouldn’t arrest him after he shouted at them about the wrongful arrest of an anti-lockdown protester, he wrote:

RPD [Raleigh PD] officers know who I am (as many of my former criminology students are on their police force). They know I teach a course on the First Amendment. They know I have tangled with Roy Cooper before and that I beat him in a seven-year lawsuit. And they know I would beat him again.

Adams also described the PRD as “corrupt” and alleged that the Capitol police who charged protester Lisa Todd had lied about her arrest and were “Roy Cooper’s Gestapo.”

In his April 22, 2020 essay for Town Hall, entitled “North Carolina Patriots Must Stand Up to Hypocritical Governor,” Adams revealed that he would challenge Cooper’s Executive Order 121 by holding a large religious service in his home.

“These requirements are unlawful – as is the entire executive order – and thus needed to be challenged,” Adams wrote.

When Adams was not, despite his best efforts, arrested for violating the lockdown orders, he noted that the governor had “been violating his own executive order by leaving the state to fundraise for his reelection campaign.” He encouraged business owners to open their businesses and affix signs to them telling Cooper to go to hell.

Adams also found authorities’ unwillingness to enforce “social distancing” rules against Black Lives Matters and Antifa activists hypocritical. On June 2, he tweeted: “Just when you started to recover from the Governor shutting your business down it gets shut down by the looting rioters the Governor fully supports. Have you not figured out that the Governor is an evil and despicable man?”

A few days earlier, Adams tweeted a rumor that Antifa was going to “hit Wilmington” and that he was “ready.” He was denounced by one Twitter user as a “nutcase.”

Nevertheless, the criminologist was a fierce critic of police brutality. His final essay for Town Hall, entitled “White Man Can’t Breathe,” sought to bring attention to the 2016 death of Tony Timpa in police custody in Dallas. Like George Floyd, Timpa died after police pinned his neck to the ground. The police showed a chilling disregard for Timpa’s well-being, joking about his unconscious state.

“[It] is time to re-open this case in the court of public opinion, if not a court of law,” Adams wrote.

“Only then will we learn whether current outrage over the death of George Floyd is based upon righteous indignation or political opportunism.”

According to his Town Hall biography, Adams was hired by UNCW in 1993 when he was “an atheist and a democrat” to teach in its criminal justice department. He later converted to Christianity and joined the Republican party. He won UNCW’s the Faculty Member of the Year award twice but had to take the university to court to protect his First Amendment rights. A court ruled in his favor in 2011. In 2014, another court sided with Adams against UNCW, deeming that it had wrongfully blocked his promotion because of his conservative views.

LifeSiteNews has reached out to Governor Cooper’s press office for comment and is awaiting a response.