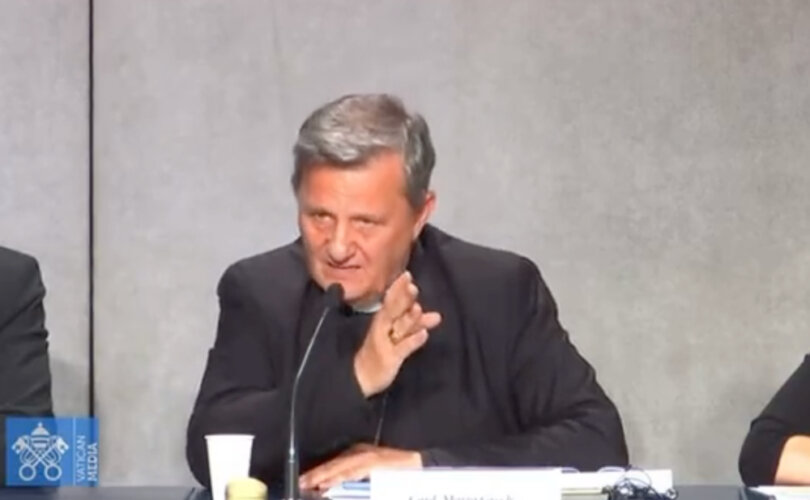 VATICAN CITY (LifeSiteNews) — A leading synodal cardinal and member of the Roman Curia has defended the “manifestly heretical” artwork promoted by the Synod on Synodality in social media posts, saying that the Church is a “listening Church.”

The topic was raised by Vatican journalist Diane Montagna during the presentation of the Synod’s new working document for the continental stage of the process. That document – which calls for more inclusion of the divorced and “re-married,” LGBT groups, and proposes a “female diaconate” – was compiled from the numerous synodal reports submitted by dioceses and bishops’ conferences around the world.

During the document’s drafting, the Synod on Synodality’s social media accounts posted a number of images, selected from the various diocesan submissions, which appeared to promote female priests and the LGBT ideology.

Some of the images juxtaposed “Catholic identity” with “LGBTQ+ identity,” and “intolerance” with “dialogue.” The word “Scripture” was also placed in opposition to “radical hospitality.”

One image in particular depicted a woman dressed as a priest wearing vestments, including a clerical collar, an alb, and a chasuble. Of somewhat peculiar interest was the fact that on top of the chasuble, the woman was wearing a stole – which is supposed to be worn underneath the chasuble – a practice often seen in secular, televised depictions of Catholic Masses.

However, Cardinal Mario Grech, the general secretary of the Synod of Bishops, downplayed concerns about the images.

Grech added that the synod has a “responsibility to take note of all voices – at this particular moment – of the people of God. Otherwise, you could also criticise us that we are not a listening Church!”

The cardinal focussed on this theme of the synod, emphasizing that “we are a listening Church.”

“At this moment we are not taking any position,” he added.

Our duty at this moment is to be a channel, to make the voices of the people of God, that arrived through the episcopal conferences.

So we exclude nothing, we take note of everything and we submit that then to the pastors who have the responsibility to guide the people of God.

Images not aligned with reality

The images in question, despite being highlighted by the synod team, have been subject to additional controversy. Catholics have accused the artist, who drew the images, of misrepresenting reality in order to promote an LGBT agenda.

Austin Quick, who runs “The Basic Catholic” social media account, received testimony from a Catholic present at some of the U.S. meetings which gave rise to the synodal reports.

He told Quick that the artwork misrepresented the young Catholics at the meetings, since it is “drawn” in their likeness, modeling their body positions, clothing style and details, facial structure, and (for the most part) coloring.

His concern was deepened by the fact that the ideology promoted by the art was totally contrary to what the models were advocating during the listening session.

“The art portrayed in the picture of the synod does not correctly represent us as practicing Catholics. The artist depicted 4/5 of us with false identities seemingly to fit a more inclusive and skewed agenda,” said the young Catholic, who remains publicly unidentified.

While the synodal team has often referred to being a “listening Church” in an attempt to downplay ever increasing fears that the synodal process will undermine Catholic teaching, the synod’s new document only exaggerates those fears.

Containing prominent calls for female deacons, it will guide the next stage of the Synod on Synodality, which has been extended until 2024.

The document refers to various groups of people who felt “neglected and excluded,” calling for more inclusion of such groups. Among those who “feel a tension between belonging to the Church and the experience of their own affective relationships,” the document listed:

While drawn from the various reports submitted from around the globe, the document was compiled by a group of synod “experts,” comprised a number of individuals who both oppose the Traditional Mass and support contraception and LGBT ideology.

One such member of the “experts” was Monsignor Piero Coda, the Secretary of the Pontifical International Theological Commission which advises the Congregation for the Doctrine of the Faith. Part of the panel presenting the new document last week, Coda has previously referenced a “great impetus to the renewal of the theological content and language” coming from Pope Francis, praising “a disruptive creative energy” which was now “being released” in the Church.