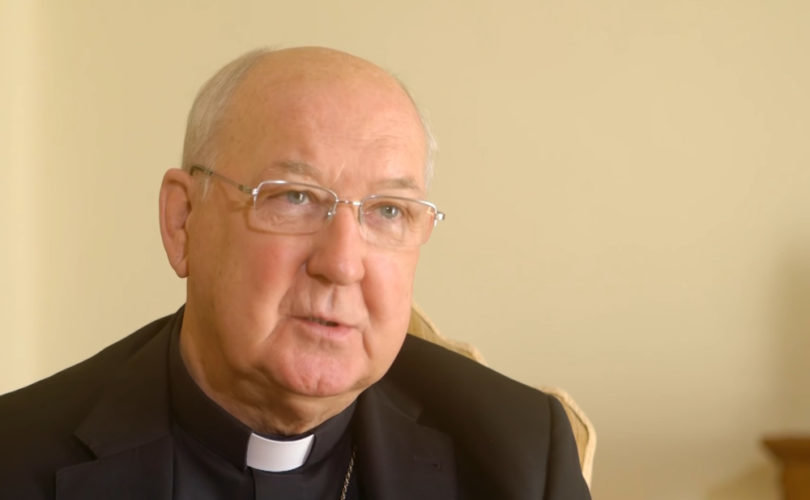 VATICAN CITY, March 19, 2021 (LifeSiteNews) — The head of the Vatican’s Dicastery for the Laity, Family and Life, Cardinal Kevin Farrell, has signaled a way around the recent Vatican document banning the blessing of same-sex unions. He pointed to the difference in sacramental nature of various unions, and hinted at Church favor towards same-sex civil unions.

Farrell made his remarks towards the end of a press conference yesterday, marking the opening of the Amoris Laetitia Family Year, in response to a question posed about the Vatican’s recent document which re-iterated the Church’s teaching that the homosexual couples cannot be blessed.

On Monday, the Congregation for the Doctrine of the Faith (CDF) responded in the negative to a question about whether the Church had “the power to give the blessing to unions of persons of the same sex.”

While being welcomed by clergy in good standing with the Church, notably by Gerhard Cardinal Müller, the former prefect of the CDF, a number of bishops and hundreds of priests have responded angrily, expressing their “disappointment” at the document. Many clergy declared that they would ignore the ruling and “continue to bless same-sex couples.”

With this in mind, German journalist Roland Juchem questioned Farrell about the “disappointment” seen in “parts of the world,” and if concerns about the Vatican’s “competence” about “matters of partnership, family and sexuality” would affect the year of Amoris Laetitia.

In answering Juchem’s question, Farrell appeared to confirm the CDF’s teaching, while at the same time hinting at Church approval for civil unions, provided they were not deemed to be sacramental in their nature.

Catholic commentator Deacon Nick Donnelly from the U.K. noted in comments to LifeSiteNews that despite Farrell’s declaration, the Church has already spoken on civil unions: “Just 18 years ago the CDF declared that placing homosexual unions on the same level as marriage would not only approve of ‘deviant behaviour’ but also obscure basic values of humanity.’”

Farrell, raised to the cardinalate by Pope Francis in November 2016, hinted at a way to essentially circumnavigate the CDF’s prohibition on blessing same-sex couples by emphasising the “distinction” between “sacramental marriage” and non-sacramental marriage. A blessing, since it is a sacramental, is related only to the sacrament of marriage, he stated.

Yet, that “does not mean that those who are only married in the Church receive the benefits of the pastoral care of the Church,” he added.

While affirming that a blessing was reserved for a sacramental marriage, in his comments Farrell admitted the possibility of “civil marriage,” “civil unions,” or “other forms of marriage,” saying that people in such unions were still to receive the accompaniment of the Church.

“There are many different pastoral situations in the world today … where people cannot have full participation in the life of the Church, but that does not mean that they are not to be accompanied by us, and by the people of parishes. We accompany all people.”

The cardinal did not expand on what such accompanying would look like, or what aspects of Catholic life would be prohibited to those who did not have full participation in it. In referring to the divorced and “remarried,” he re-iterated his point that the Church would accompany such people merely with the “hope that one day they will live totally in accordance with the Church’s teaching.”

“It can be difficult to understand, but I insist and would very much like to clearly understand that we are open to accompanying all people,” Farrell continued.

The intended interpretation of the CDF’s document?

In the now infamous interview, the Pope noted the “incongruity” of speaking of “homosexual marriage,” and so called for civil unions instead. “But what we have to have is a law of civil union [ley de convicencia civil], so they have the right to be legally covered,” Francis declared.

— Article continues below Petition —
PETITION: Ask Pope Francis to clarify and rectify scandalous remarks on homosexual civil unions
Show Petition Text
22736 have signed the petition.
Let's get to 25000!
Thank you for signing this petition!
Add your signature:
Show Petition Text

The Pope’s comments were greeted with dismay by prominent clergy, with former Papal Nuncio to the U.S., Archbishop Carlo Maria Viganò, calling them “totally heterodox,” constituting “a very serious cause of scandal for the faithful.” He accused Francis of “trying to raise the stakes’ in a crescendo of heretical affirmations,” in order to create a rupture in the Church.

Farrell’s comments to the press could be the intended interpretation of a potentially problematic line in the CDF’s recent document, which mentioned the “positive elements” of homosexual relationships, “which are in themselves to be valued and appreciated.” Even with these “positive elements,” a blessing could not be given to same-sex couples, wrote the CDF.

The CDF explained that this prohibition was “a reminder of the truth of the liturgical rite and of the very nature of the sacramentals, as the Church understands them.” In banning blessings of such unions, the document thus appealed not to the law of God, but rather the law of the liturgy, a much weaker argument and one which allows room for alternatives to same-sex “marriages,” provided that they are not seen to be a sacrament, or part of the liturgy.

Deacon Donnelly pointed out this danger, saying Farrell talked about homosexual unions “as if they are just another form of marriage. By doing so he obscures God’s clear judgement that homosexual acts are ‘acts of grave depravity’ (CCC 2357).”

“His neutral tone about homosexual unions makes the mistake also warned against by the CDF [in 1986] of giving an ‘overly benign’ interpretation of the homosexual condition’, thereby misleading people into assuming that ‘… living out of this orientation in homosexual activity is a morally acceptable option. It is not.’ (CDF 1986).”