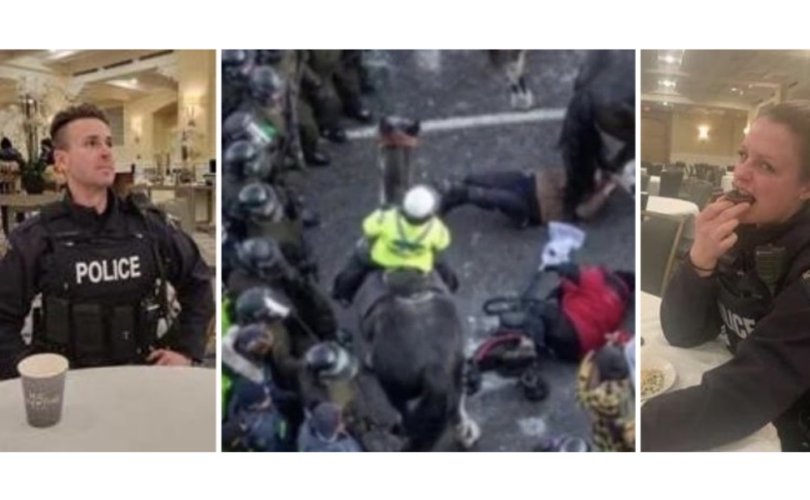 Two of the RCMP officers, and the image of mounted police trampling a demonstrator at the Freedom Convoy.Rebel News/Twitter screenshot

Over the weekend, horrifying reports emerged from Canada’s capital city showing police officers on horseback trampling protesters and callously injuring a disabled elderly woman while conservative journalists were savagely beaten and shot by police with a tear gas canister.

Screenshots of the disturbing messages, obtained by Rebel News, show RCMP officers delighting in the over-the-top brutality of their fellow law enforcement officers.

“Time for the protesters to hear our jackboots on the ground,” RCMP officer Andrew Nixon wrote.

After officer Robin Thibault jokingly warned Nixon, “this is a kinder, gentler RCMP,” Nixon responded, “Okay, we can give out free hugs and unicorn stickers.”

In another posting, Nixon wrote, “Cheers crew! Here’s to some sweet OT this weekend for our on call members. Don’t kick all of them out until next weeks group gets our turn.”

When a Facebook video showing police horses trampling peaceful protesters was posted, it was met with praise.

“We only think we’re living the dream,” Chris Russell said.

“That’s what we need to do!” Nixon wrote.

“Just watched that horse video- that is awesome!!!” Marca wrote. “We should practice that manoevre.”

Other postings within the RCMP chat show officers enjoying downtime in Ottawa’s historic luxury hotel, the Château Laurier. The hotel photos present a stark contrast to the harsh conditions the protesters endured as they’ve tried to catch the ear of Canadian government officials concerning the unreasonableness of COVID-19 mandates.

The authenticity of the messages was ostensibly verified in an official statement by the RCMP, saying “we are looking into the matter,” and declaring “this material is not representative” of its members.