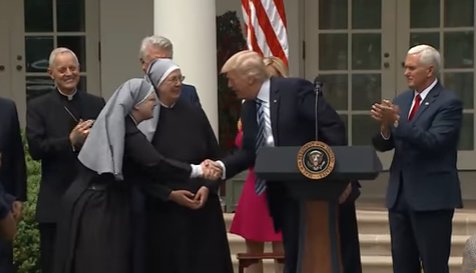 WASHINGTON, D.C., June 1, 2017 (LifeSiteNews) – A drafted new federal regulation was leaked yesterday, and pro-life groups say if it's finalized it will be an “important step” toward ensuring the Little Sisters of the Poor and other religious employers don't have to participate in the provision of contraception.

Latest development in a battle dating back to Obama era
For years, religious employers have fought a regulation from the Obama administration's Health and Human Services (HHS) department forcing them to participate in the provision of contraception and life-ending drugs and devices against their beliefs. The Little Sisters of the Poor, pro-life nuns who care for the elderly poor, have been at the center of this battle along with Hobby Lobby. Many other religious entities are fighting the mandate as well.

The government claimed it exempted the nuns from its rule forcing employers to provide their employees with health plans that covered various contraceptive and potentially life-ending drugs and devices. But the way the “exemption” worked was that the Little Sisters of the Poor would have to sign a document stating their moral opposition to providing such services – and the signing of this document would trigger the provision of those services anyway, just not technically from the Little Sisters.

Catholic moral theologians argue that participating in this process is morally impermissible.

The fight went all the way to the Supreme Court, which ordered the government to work with the Little Sisters of the Poor and other religious employers to find a solution.

Little Sisters of the Poor and faith leaders were at the White House Rose Garden for the order's signing. Many social conservatives lamented the final version of the executive order because it was much weaker than an original leaked draft. Others said it was a good first step in rolling back Obama-era attacks on religion.

Concerns over abortifacients, contraception programs acknowledged
The new leaked 125-page document, which is currently under review, would essentially implement Trump's executive order. It allows any non-governmental entity to request exemption from the contraceptive mandate on moral or religious grounds.

It makes the “exemption” mechanism the Little Sisters opposed completely optional for objectors. It would be an “optional process for certain exempt entities who wish to use it voluntarily,” according to the leaked text.

The drafted copy “makes it clear that insurers may issue separate policies to women whose employers are exempt from the mandate,” according to Becket, the religious liberty law firm defending the Little Sisters of the Poor.

It would exempt religious groups from having to cover the week-after pill.

The leaked draft acknowledges pro-lifers' concerns that certain forms of contraception can act as abortifacients. The Institute of Medicine, now the National Academy of Medicine, recommended the government “guidelines cover the full range of Food and Drug Administration (FDA)-approved contraceptive methods, sterilization procedures, and patient education and counseling for women with reproductive capacity,” the document explains.

It continues: “Because [the] FDA includes in the category of 'contraceptives' certain drugs and devices that may not only prevent conception (fertilization), but may also prevent implantation of an embryo, the IOM’s recommendation included several contraceptive methods that many persons and organizations believe are abortifacient and oppose on that basis.”

“Despite the Departments’ previous view that increased contraceptive access through a coverage mandate would reduce unintended pregnancy, other data indicates that, in 28 states where contraceptive coverage mandates have been imposed statewide, those mandates have not necessarily lowered rates of unintended pregnancy (or abortion) overall,” the draft says.

The draft expresses concern that when employers are forced to provide contraception in health plans, those health plans impact not just their employees but also their families. It seems to suggest that mandating employee health plans cover contraception could lead to an increase in teen promiscuity:

“Imposing a coverage Mandate on objecting entities — whose plans cover many enrollee families who may share objections to contraception — could, among some populations, exacerbate the long-run negative effect of changing sexual behavior by, for example, providing contraceptive access to teenagers and young adults who are not necessarily in the sexually active at-risk population of women.”

Vox, which obtained the leaked draft, offered the following analysis:

As the Trump administration itself notes, workers whose employers request an exemption from the mandate are no longer entitled to free birth control. They would potentially have to cover the cost themselves.

However, “further legal action will still be necessary to wrap up the challenges to the prior version of the mandate.”

“Better late than never,” said Mark Rienzi, senior counsel with Becket. “At long last the United States government acknowledges that people can get contraceptives without forcing nuns to provide them. That is sensible, fair, and in keeping with the Supreme Court’s order and the President’s promise to the Little Sisters and other religious groups serving the poor.”

The Susan B. Anthony List issued a statement saying the rule, “if issued as written, is an important step in acknowledging the importance of conscience rights for all Americans. … The pending interim rule is a welcome sign that the Trump administration is continuing their work to protect the conscience rights of all Americans.”

Family Research Council President Tony Perkins called the leaked draft a “very positive sign” that the federal government is working “to cease its hostility toward Christians and those who object to the Obama-era healthcare mandates.”

“The freedom to live out faith in all areas of society without government punishment or intimidation is fundamental to making America great again,” said Perkins.